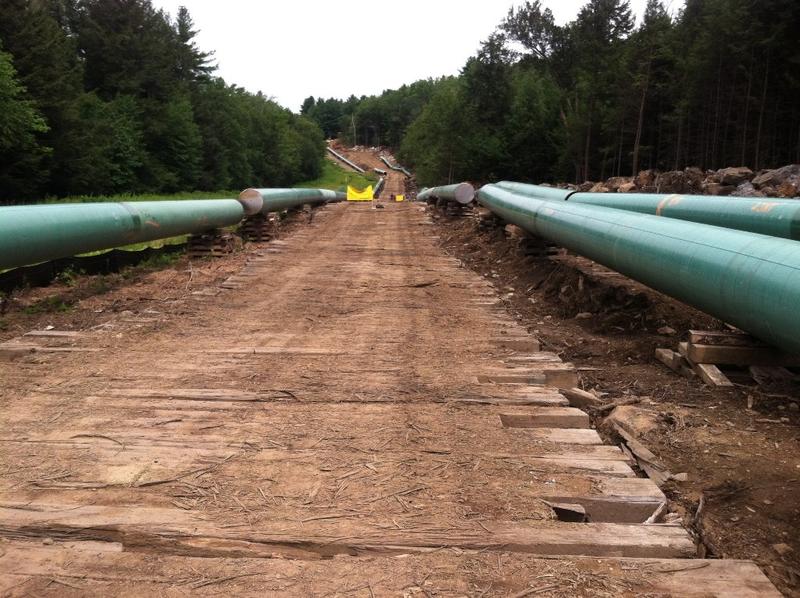 Earlier this year, the residents of Sandisfield were recovering from their four-year pipeline fiasco when Kinder Morgan executives contacted the Sandisfield Board of Selectmen with an offer of $50,000.

The company had recently completed a pipeline project that had been bitterly opposed by the town, using the authority of the Natural Gas Act to construct a pipeline loop in the Otis State Forest to send natural gas to Connecticut.

But litigation in Berkshire County Superior Court ended with a decision that the Natural Gas Act pre-empted Article 97 of the Massachusetts Constitution, which had conferred protected status on certain irreplaceable natural resources.

In the end, Kinder Morgan subsidiary Tennessee Pipeline Company constructed 2 miles of pipeline in an area of old-growth forest of unusual beauty in Otis State Forest, near Lower Spectacle Pond.

After completion of the pipeline last November, Kinder Morgan suggested that Sandisfield could use $50,000 to improve the town’s roads, which had been beaten up over the six-month period of pipeline construction by the constant flow of heavy trucks.

The board of selectmen soon realized, however, that the amount was actually intended to be consideration for a release of all liability relating to the pipeline.

According to the Sandisfield Times, the gas company was to be held harmless for any past, current or future claims to damages due to last year’s pipeline construction in the Beech Plain section. After consultation with the town attorneys, the board of selectmen turned down the money at its meeting in August.

Board member George Riley said at the meeting, “One serious gas leak and we’d be liable for much more than that amount.”

The recent horrific gas explosion in Lawrence and Andover likely validated the board’s decision to turn down the money and the release.

Throughout the years of legislative and judicial maneuvers, the waves of angry protests, the security guards and state police, and the construction trucks and disruption, the residents of Sandisfield have received little compensation.

The $50,000 wasn’t the only tempting sum offered, but subsequently conditioned and withdrawn, by Kinder Morgan.

Alice Boyd was chair of the board of selectmen in 2015, when Kinder Morgan offered a cool $1,085,000 to the town for being the host community for the pipeline.

Boyd recalled in a conversation with the Berkshire Edge: “Kim Watson, president of Tennessee, and her attorneys had a contract drawn up that took a year, but they’d tied the funds to my publically supporting the project.”

That is, Boyd was expected to support the bill introduced by former Rep. Garrett Bradley from Hingham that would remove the Article 97 protected status from Otis State Forest and Spectacle Pond, giving Tennessee an easement for the pipeline.

But the board unanimously opposed the bill and, as an elected official, Boyd was bound to voice the position of her constituents.

On Nov. 10, 2015, supported by scores of Sandisfield residents, she testified against the bill in a meeting at the State House in Boston.

Boyd said, “A call had been set up to finalize the contract, but after I testified they immediately cancelled it and withdrew.”

Ultimately, Tennessee got its easement through litigation and the pipeline was constructed. Sandisfield ended up being a host community anyway — but without the $1,085,000 compensation. Kinder Morgan ultimately paid the $40,000 in legal fees the town had incurred negotiating the cancelled contract.

What is happening with the $640,000 compensation for the easement?

In December 2016, after months of negotiation, Tennessee Gas Pipeline and the Department of Conservation and Recreation finalized a consent judgment through Berkshire Superior Court providing for a total of more than $1.2 million in compensation to the Commonwealth.

About half of that amount went for environmental monitoring and mitigation of the impacts of the pipeline such as reseeding, recreation of wildlife habitat, and removal of invasive species.

$640,000 was earmarked for replacement conservation land and recreational improvements.

A spokesman for Kinder Morgan said that the company has provided the required payments to the state of Massachusetts and the DCR.

$300,000 was earmarked for acquisition of land to be placed in the Conservation Trust. Olivia Dorrance, speaking for the DCR said “the agency is in the process of identifying a parcel of land that would suitably address the impacts associated with the TGP project.”

The DCR will acquire conservation land “in the vicinity that provides ecological functions equivalent to the land impacted by the pipeline,” according to the press release issued by the attorney general’s office describing the settlement. Pressed for details on where the replacement land might be, DCR did not yet know.

Once identified, the parcel will go through the DCR land acquisition process.

Another $300,000 required by the consent decree went to DCR’s Conservation Trust to be used for recreational improvement projects in Massachusetts state park lands.

One recreational improvement target for the funds provided to DCR by Tennessee is the York Lake bathhouse restoration project in Sandisfield State Forest.

In September 2018, DCR began “a $50,000 restoration project to renovate and ultimately re-open the bathhouse, including interior and exterior painting, flooring repair and installation, window replacement, renovation of interior facilities, and drainage and ventilation work.” The work is likely to be completed by summer 2019.

An additional $60,000 was provided through the consent judgment for improvements to Otis State Forest. DCR is in the process of identifying potential improvements.

Apart from the $640,000, the Kinder Morgan spokesperson said — and DCR confirmed — that the company also donated more than 35 acres off of South Beech Plain Road [in Sandisfield] to DCR that contain mature forest and vernal pools.

Will the Otis episode serve as a dangerous precedent for other Article 97-protected land?

Massachusetts residents continue to be apprehensive about the dangerous precedent set by the 2016 Berkshire Superior Court ruling that the federal Natural Gas Act preempted Article 97 of the state constitution.

Citing the supremacy clause of the U.S. Constitution, Judge Agostini upheld Kinder Morgan’s right to eminent domain and an easement for its pipeline.

The court’s decision seemed particularly dangerous to conservationists throughout the Commonwealth when Kinder Morgan’s mammoth Northeast Energy Direct pipeline was still in play. If NED had proceeded, it presumably could have bulldozed through any number of Article 97-protected areas following the Berkshire Superior Court precedent.

But the NED pipeline was killed by Kinder Morgan itself in May 2016. The necessary customer base had not materialized, and the 180-mile pipeline had been strongly opposed by landowners and citizens throughout the state. Applicants for the huge Access Northeast pipeline project also withdrew their pipeline permit following the decision of the Supreme Judicial Court that prohibited utilities from charging ratepayers for pipeline construction.

For now, at any rate, no interstate pipeline is on the horizon, nor are any other projects such as federal highways or railroads that might threaten Article 97.

Nonetheless, there continue to be two conflicting narratives in Massachusetts.

One is reflected by ISO-NE, otherwise known as “the Grid,” which is responsible for managing the electricity supply throughout New England.

In a January 2018 study, ISO-NE modeled 23 scenarios that might be possible by winter 2024–25, and concluded that New England could be headed for significant levels of emergency actions such as rolling blackouts or public requests for energy conservation, particularly during major fuel or resource outages.

Although ISO-NE did not directly advocate for a new pipeline, the implication was clear.

An editorial in the Boston Globe, “Why You’ll Pay for Beacon Hill’s Pipeline Folly,” played the same old pipeline song, scolding the legislature for failing to join with Connecticut and Rhode Island to authorize ratepayer financing for a new natural gas pipeline.

The counterpoint narrative was expressed by Craig Altemose of 350 Massachusetts for a Better Future, who wrote a rebuttal to the Globe editorial saying that it was “puzzling to see the Globe crusading for new natural gas pipelines that rigorous studies say we do not need, are outrageously expensive, and harm the environment and the climate.”

For now, at any rate, it appears that the insult to Article 97-protected lands by interstate pipelines has been confined to Otis State Forest.

For federal projects in the future, however, Otis could provide a difficult legal precedent, but one that opponents could be expected to counter with arguments based on alternatives and need.