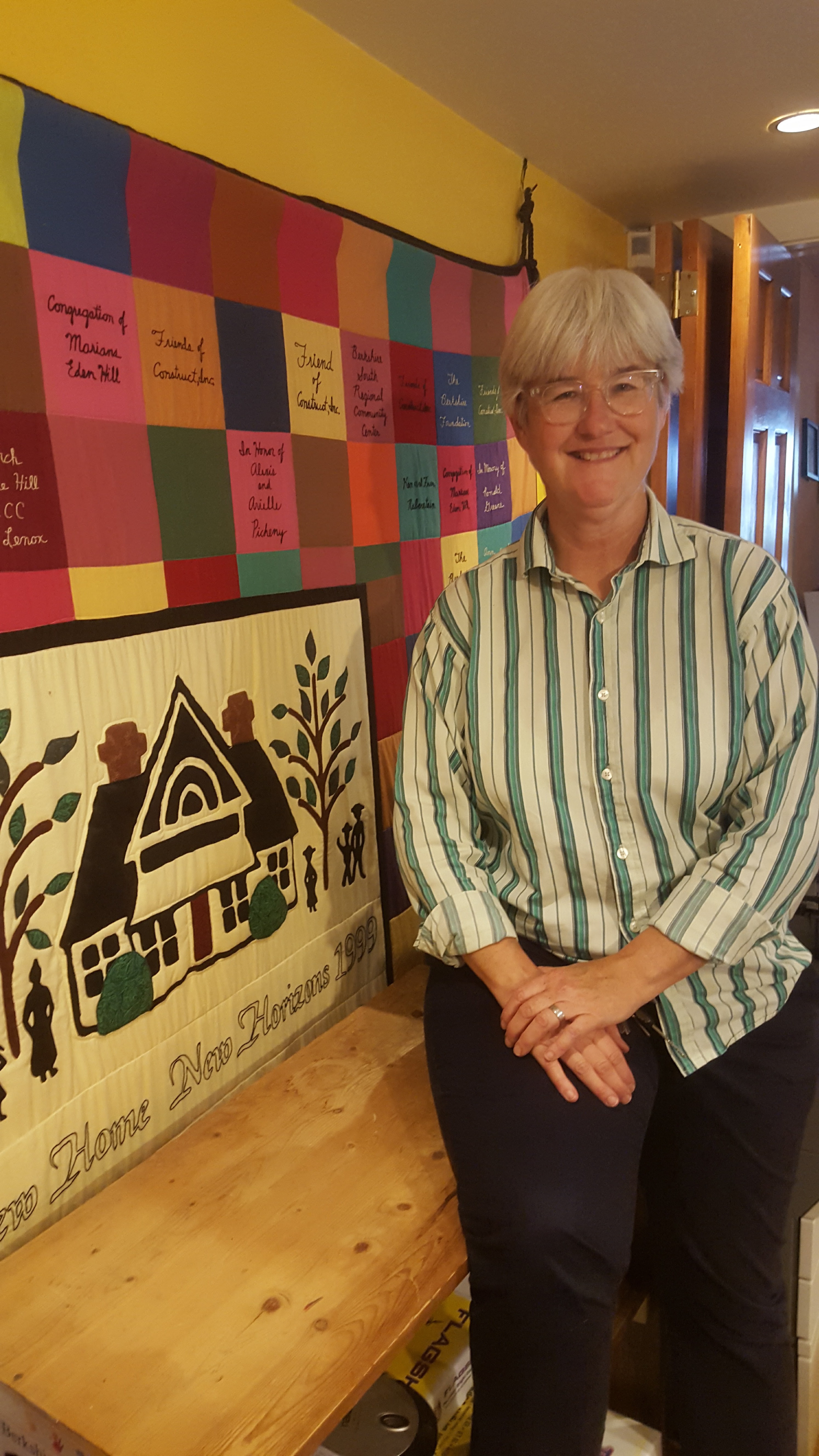 I had the pleasure to interview Jane Ralph, executive director of Construct Inc. in Great Barrington. As a former resident of Construct’s Women in Transitional Housing, it was especially welcoming to get to know Jane better.

Construct is known in the community for providing emergency transitional housing to those individuals who are homeless. They also offer affordable housing for families and individuals and long-term communal living. Since 1995 Construct has developed 80 housing units in South County. They are in the process of building Forest Springs, an 11-apartment community on Stockbridge Road which will have full occupancy by April 2018.

In addition, Construct offers programs to circumvent financial crises that could lead to homelessness. Jane described Construct’s mission as a way “to provide help to our neighbors who face housing crises, so that eviction can be avoided, utilities kept on, and either on-site transitional housing or off-site housing referrals for individuals and families if necessary.” She boasted about her staff and proudly said, “We have staff that is able to counsel and educate individuals regarding available housing in the community as well as help in completing housing applications. Often we help clients and residents with the underlying issues that caused their housing struggles in the first place.” In addition, she said, “we know from experience that many folks need help with managing their finances in order to prevent homelessness. Our philosophy is to help individuals grow by increasing lifestyle skills, especially with financial sustainability.” Construct has recently partnered with Greylock Federal Credit Union, creating a pilot micro-loan program for incoming Forest Springs tenants to repair credit and cover their security deposits. According to Jane, “if this goes well, we will expand it so that our financial support can make more of a long-term difference.”

Furthermore, Construct also has several other educational programs that include teaching and preparing students for the HiSET and/or GED exams. They have also started a weekly women’s peer support group, which has garnered support from other human service agencies. The main focus of the group is to have a self-affirming discussion and periodic guest speakers. Jane said, with much assurance, “We are very proud of the tremendous success with all of the programs we can offer South County residents.”

Regrettably, affordable housing waiting lists are long, especially in South County. For instance, it can take approximately six to eight months to get emergency subsidized senior housing, if not longer. Those on standard lists can wait several years. Jane pointed out that “you need a great deal of patience. All and all, it is a tough situation for low to moderate income folks.”

People who are homeless

Jane described people who are homeless as “our neighbors, often invisible to the community.” According to Jane, “We need to destigmatize a problem that many are only a heartbeat away from; living paycheck to paycheck; depending on a job that may or may not last.”

Furthermore, she noted that some individuals feel ashamed, which she has often found can perpetuate the negative image of the homeless population. “Unfortunately,” she said, “false stereotypes can influence access to community support and government funding.” Even though homeless individuals are often perceived as sleeping on park benches and panhandling, they can be our neighbors living temporarily in motels or shelters. “In truth,” she said, “the highest growing homeless populations are families with young children.”

However, Jane described those individuals who are chronically homeless and suffer from a variety of health issues that can contribute to their own situations. These individuals are sometimes hard to reach even when housing is available and find they are homeless again because of making poor choices. Furthermore, there are individuals who grapple with mental illness, which Construct sees a great deal of, especially post-traumatic stress disorder.

Jane couldn’t say enough about her Construct board members’ and their outstanding dedication in supporting Construct’s mission. “They are amazing ambassadors aware of how difficult it can be to obtain affordable housing,” she said. Some board members serve as a result of having received help from Construct or from other agencies with similar services. Others recognize that, to be economically and socially vibrant, the Southern Berkshires needs to have affordable housing for everyone. In the meantime, “our chair, Elizabeth Rosenberg, volunteers as the receptionist one morning a week.”

In addition, Jane was grateful for neighbors donating items to the transitional living facilities. “It is not uncommon to have someone drop off a meal or share some food from a community event with our residents who may have no income,” she said.

She also mentioned that “we can always use volunteers to be receptionists, provide transportation, or become mentors not only to our current residents, but former ones as well. Mentors can form relationships that our staff, even though highly skilled, may not be able to do.” For instance, she pointed out that “current or former real estate agents have assisted heads of families with finding affordable homes, a helping hand that in the past has led to special relationships.”

Furthermore, she said, “Our work with individuals and families has taught us that two things need to happen: affordable housing and employment. Thus, any community help is greatly appreciated. Often folks need a second chance to get back on their feet and if potential landlords and employees recognize this, it might make all the difference in the world to someone’s quality of life.”

The Walk This Way 2017 was held this past October. Jane emphasized the importance of the annual event as a crucial part of Construct’s funding; which is earmarked for transitional-living housing, emergency funding, employment and educational programs. As a result of the walk, Construct is able to meet the financial needs that help people get housing. The walk serves as a way to rally community support, attempting to provide a face to a problem. Meanwhile, Jane added with much enthusiasm, “Yes, this is a significant event that has been occurring for 29 years and we are looking forward to our 30th Walk to be held on September 23, 2018.”

Jane celebrated her one-year anniversary working at Construct this past September. When asked about this, she was pleased to say, “I have enjoyed my work and am looking forward to reaching out more to the community for help engaging in Construct’s programs.” In fact, with Jane’s main focus on fundraising and development, she delegates her some of her responsibilities to her staff to deal directly with residents and clients. “We have a great staff, well acquainted with the challenges clients face. I am grateful to work with them.” Her staff will say that Jane is not one to micromanage and relies on them to get the job done. She has an open-door policy for her staff, volunteers, residents, clients and community members. I know; I have had many conversations with her despite her busy schedule.

Jane comes to Construct with a great deal of human service experience that includes working with communities on the margin such as survivors of domestic violence and LGBT populations, in addition to homelessness. She was previously an ordained minister and has worked not only in New England but also in Washington, D.C., and the Midwest. She likes to demonstrate herself the effort it takes to maintain self-care and supports wellness programs among Construct’s clients as well as for her staff. In fact, during the summer months, she can be seen riding her bike to work.

As a recipient of her hard work, I certainly can appreciate Jane’s advocacy and look forward to seeing her grow in a job that benefits many. I earnestly believe Jane has tremendous insight to the plight of homeless individuals. She sums up the challenge this way: “When in crisis, sick or distraught, and living in poverty, it can be more devastating as the safety net is so thin.”