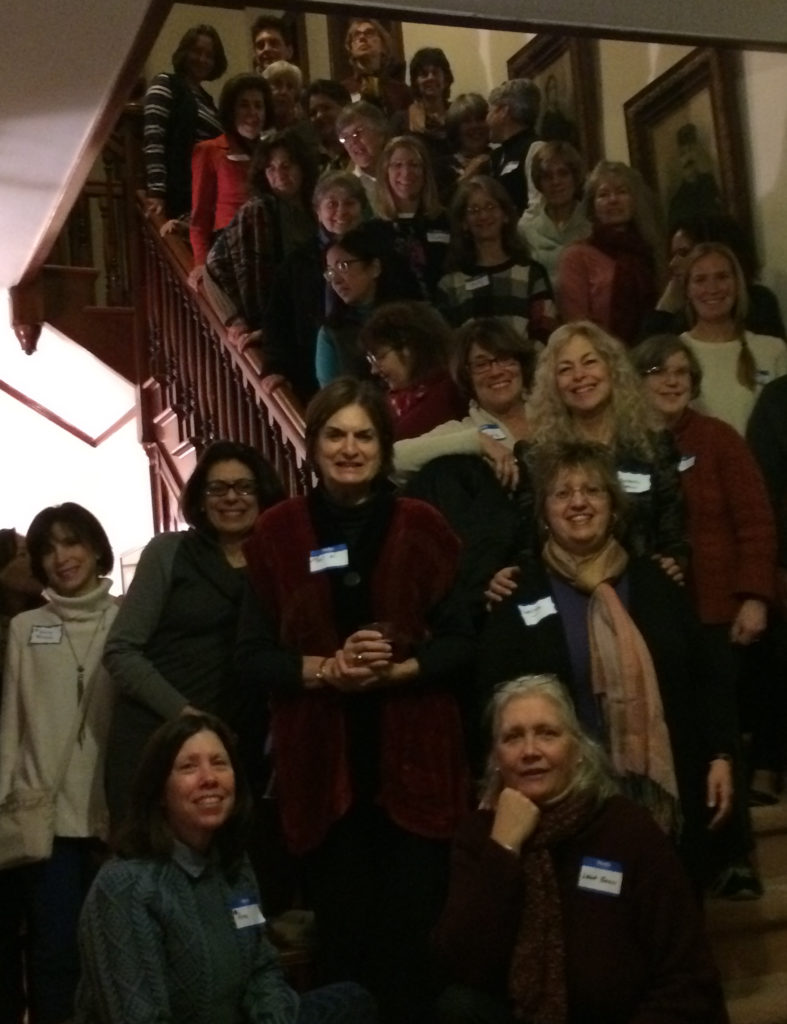 Members of the Great Barrington chapter of Dining for Women at the group's third anniversary celebration in 2015. The chapter will celebrate its seventh anniversary Tuesday, Feb. 19.

Until recently, Leslye Heilig served as the Northeast regional co-leader, with Ruth Bates, of Dining for Women. The group is a unique mix of good food, good company and good causes. Women gather once a month to eat potluck dinners, write checks for charity and learn about the projects being funded that month.

Grassroots organizations are funded internationally with grants from $25,000 to $50,000. The organization formed in 2002 when retired nurse Marsha Wallace, a mother of four from Greenville, South Carolina, read an article about friends who met for potluck dinners and donated the money that would have been spent on restaurant meals. The local chapter will celebrate its seventh anniversary Tuesday, Feb. 19.

Heilig is a retired pediatrician who moved to Great Barrington in 1990 with her husband and twin daughters. She grew up in Port Jervis, New York, before attending Princeton University and then Harvard Medical School. Heilig also tutors ESL through the Berkshire Literacy Network, helps to coordinate housing for the Berkshire Bach Society, and has worked on a variety of political campaigns when not knitting and crocheting.

Rochelle O’Gorman: How did you first become involved with Dining for Women?
Leslye Heilig: My friend Linda Baxter, a nurse midwife with whom I worked, had read about DFW and in 2011 she asked me to look into it. We started the chapter together in January 2012, with our first meeting in February 2012. This was before the big “surge” of chapters after an article on “NBC Nightly News.”

RO: I see you just retired as the regional leader. What is your role now?
LH: I was the Northeast regional leader for three years. I am now a Northeast chapter mentor, which means I help launch and advise new chapters, and I am one of a few folks on the new advocacy committee.

RO: How are the recipients chosen?
LH: Grantees are selected via applications, requested twice a year, for grants of around $50,000. The grant selection committee, made up of DFW members who have learned how to assess grant proposals, meets very regularly to review applications—there are generally 50 plus/minus applications for six grants. The GSC spends a great deal of time vetting them. Linda Baxter is on the GSC.

RO: Have you ever travelled to meet with any of these groups?
LH: I have not personally traveled but, again, Linda Baxter has. I have met with members or staff from multiple grantees over the years.

RO: Are men ever involved in the program? Is there an auxiliary group for men?
LH: Our group is all women, although we have held one meeting open to partners. There are multiple groups nationwide that have male members or are couples groups; the composition of the group is determined by each group.

RO: How important is the social aspect of the group?
LH: I think it is a significant component. As Nicholas Kristof [a New York Times op-ed columnist] has said about DFW, philanthropy does not have to mean “without fun.” The charm of DFW is that although it is significantly social and most groups share a meal, it is also educational and raises funds.

RO: How has the group grown locally?
LH: The numbers of “members”—which means someone who either attends or makes a donation—has fluctuated. Over the past seven years, we have had over 400 women attend at some point in time, but I would say I consider around 150 as “active” members, meaning they either attend or make regular recurrent donations.

RO: What was the first meeting like?
LH: We had been led to believe it would be small. We invited about 75 women by email, and 30 attended! It was wonderful, although Linda and I felt like we were flying by the seat of our pants. However, that first meeting we raised over $1,100 and we have never looked back.

RO: How often do representatives from each group attend the meetings?
LH: It depends on availability and whether or not we invite someone. I would say we have representatives, either in person or via Skype, from two to four times a year.

RO: How involved is the national board in the decisions made by local chapters?
LH: There are specific guidelines developed for each chapter—the same educational material is provided to all, with videos and PowerPoints as needed. And every group is learning about and raising money for the same group. Beyond that, the structure of the meetings is up to each chapter. I have attended meetings in public venues, small groups eating dinner at a table together in a member’s home, larger potlucks, and non-meal-based discussion groups.