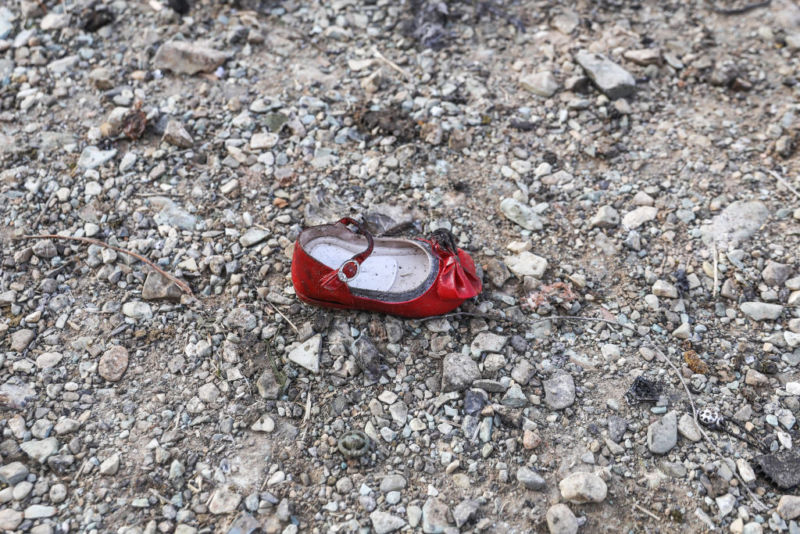 A child's shoe is pictured Jan. 8, 2020, at the scene of a Ukrainian airliner that crashed shortly after take-off near Imam Khomeini airport in the Iranian capital Tehran. Photo: Borna Ghassemi/ISNA/AFP via Getty Images

I have a lot of things I should be doing today, not the least of which is finishing up a half-written features story about local audiobook entrepreneur Alison Larkin. I just can’t seem to move past the fear sitting in the pit of my stomach like a 10-pound weight. Naturally, I have felt fear at various times in my life; we all have. Every one of us has had near a miss in a car or seen a child careening toward a fall, but this kind of fear is different. It makes my body tense and my fingers curl as it settles into my bones. I hold my breath and feel tension clamp around my shoulders; I am having trouble sleeping.

The only other time I felt fear like this was Sept. 11, 2001. The phone call from my mother, the news that the country was being attacked, hearing that my brother was on an American Airlines flight that left Logan Airport at approximately the same time as the planes carrying the hijackers — that awful, awful hour of standing in front of the TV clutching the phone in one hand and tissues in the other, unable to get out of my flannel nightgown, unable to move, barely able to breathe until my brother was located in Atlanta an hour later. Then came the aftermath of depression and a low level terror that lingered for over a week.

I felt that same leaden anxiety this past week when the news flashed across my phone that American military bases were being bombed. I could barely breathe as I sat with my mother and my cousin watching the news, though the fear started days earlier, when I learned that our government had killed Qasem Soleimani.

Soleimani was a ruthless man with a charming smile. He was the commander of Iran’s Quds Force and responsible for countless deaths of Americans. Not many people in this country will mourn his passing. That said, President Trump opened a Pandora’s box of worry when he ordered the strike that killed Soleimani and we may very well reap those miseries for months, if not years, to come.

Trump said an attack on our embassy in Baghdad was imminent, that he saved lives by taking out the Iranian leader. Perhaps, but I find it unlikely that this is anything but a case of wag the dog. I believe the president needed a distraction from his impeachment hearings and our military was incredibly inept to even put the Soleimani option on the table. According to reports from members of Congress, the briefing regarding what appears to be an illegal act of war on a foreign government was full of holes. The American people have not been given a realistic or believable account of why this attack happened, but we are going to have plenty of time to digest the aftermath. And so will all the friends and relatives of the 176 people aboard that Ukrainian airliner shot down in Tehran by Iranian forces immediately after takeoff, killing everyone aboard.

I actually don’t blame the Iranians. I think it was a mistake made under the duress of battle. None of the Iranian missiles aimed at our troops in Iraq killed a soul. Those were intercontinental ballistic missiles. They are highly accurate and can carry explosives, biological agents or nuclear weapons. I think the Iranians sent a message that they can fight back, but did not want to start a war. And I am glad that cooler heads prevailed in this country and punished the Iranians for their attack with sanctions and not bombs.

However, I firmly believe life just became much more dangerous for all Americans, especially those living in larger, urban areas. Islamism is on the rise. Jihadists and other radicalized Muslims believe they are on a mission from God. There is no arguing with a religious zealot, especially one willing to drive a bomb-laden car into a building or detonate explosives strapped to their own body. I very much fear we are going to see more of that.

I hope I’m wrong, but think about the fact that the citizens of Iran were so enveloped in anger and grief that they stampeded at Soleimani’s funeral and killed 56 innocent onlookers. I think that anger and grief may morph into future acts of terrorism. Also, if you are keeping score, that is 232 civilians, all dead, because Trump killed the second in command of a foreign country without congressional approval.

What happens next? Are we going to see more and more violence across Europe because of Trump’s tactical blunder, an action other American presidents chose not to take because they planned ahead and thought about what such an assassination could mean? Will we see radicalized people in this country pick up more semi-automatic weapons or get on planes with evil intentions? Do I let my daughter go to school in New York City, her dream, or do I let my fear of terrorist attacks send her to a less populated locale? After all, no one thinks it will ever be them on the other side of a bomb, bullet or missile, but the families burying what is left of their loved ones from that Ukrainian 737 will never feel safe again. Now ask yourself if Trump cares.