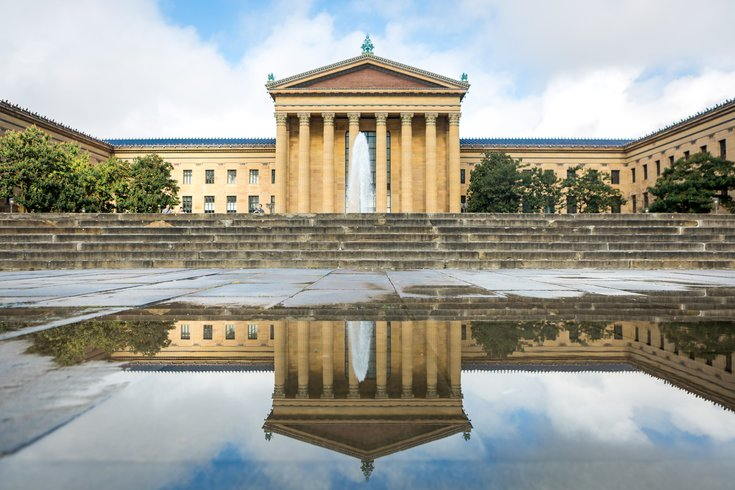 I have a soft spot in my heart for the City of Brotherly Love. I was staying with my long-since-departed and much-missed friend Gayle when I learned I was a mother. I was asleep in her lovely white room at the top of the stairs when my phone rang. I clearly remember staring at her white beadboard walls while two women shouted into my ear, “Happy Mother’s Day!” My daughter, Kay, had successfully been adopted in Ethiopia in my name. It was July 30, 2008. My birthday had been the day before and I had never been given a lovelier, more meaningful gift.

Naturally, I was thrilled when my daughter said she wanted to go to Philly as part of our vacation in Pennsylvania. We spent the first couple of days at the centrally located Sonesta near Rittenhouse Square and, most important to my daughter, interesting food shops. Being exhausted, we picked up a selection of comestibles and enjoyed the hotel, which was comfy and felt homey, with stunning views of the city. Everyone was very friendly and helpful and I had no problem letting Kay go to the pool alone as I felt the place was well staffed and safe.

We used two different buses to get around the city and I would recommend them with only one reservation: They stop around 6 p.m. It is, however, very easy to Uber in Philly and we never waited more than a few minutes for a ride. Both the PHLASH and the Big Bus make a loop through the city and each allows one to get off anywhere on the loop. There are several companies that offer the same service and you can get to all the major tourist attractions easily or just stay on the bus to see the city. You can hop on and off anywhere along the route all day long.

We had to take a shuttle to the first stop, but the concierge at the Sonesta set it up and someone all but escorted us to the shuttle. It was easy. As both Kay and I are used to cow pastures more than sidewalks, we loved all the brick and statues and murals on display everywhere. It turns out Philadelphia has more murals than any other city in the country. In fact, we chatted with some of the painters who sat at a communal table with us in the Bourse Marketplace, a warehouse-sized food hall that is 123 years old and filled with amazing smells and delicious food, but closes around 6 (even if the website gives extended hours.)

We made a beeline for the Liberty Bell, a must-see since Kay had spent much of the summer studying history at the National History Academy in Middleburg, Virginia. Well-guarded and well-run, we meandered through on our own and then headed to Independence Hall. Anyone can get in line for the bell but one must get a ticket for Independence Hall, which is free but the number of tourists allowed inside is limited. The tour was short but thorough and well worth seeing, as the building is maintained almost exactly as when our forefathers haunted the rooms.

We were back on the bus and heading to the Philadelphia Museum of Art after eating unexpectedly delicious Korean food at the Bourse. We walked up the steps of the Philadelphia Institute of Art and gawked at the Rocky statue, but neither my daughter nor I had any desire to emulate the jog up the stairs or the triumphant pose, though we had fun watching others do both.

We greatly enjoyed all the Impressionism and were lucky enough to see the Yoshitoshi exhibit of block prints that are clearly precursors to modern graphic art. And thanks to both Yelp and Uber, we were able to find Meskerem, a small Ethiopian restaurant, for dinner. Meskerem was cute and clean and the woman running it spoke to us for a long time, hugging my daughter when I told her that my Ethiopian-born Kay is a great student. She just contributed to the feeling of friendliness we felt as soon as we arrived in town. The food was authentic and abundant and not expensive. (Tiny Meskerem does not have a website, but is located at 225 S 45th St., (215) 222-2104)

In an effort to experience different parts of the city, we moved to the sleeker, upscale Loews, which was very close to the Reading Terminal Market. The hotel was slightly less warm and friendly than the Sonesta, but we loved the cool, crisp feel of the place with its refined black and white minimalism. It is quite chic, boasting a busy bar and restaurant and newly renovated rooms. The Loews was also bustling, and we were pretty sure we talked to members of the Titans football team in the lobby, but to the hotel’s credit, we could not worm solid information out of anyone.

After checking in we met my late friend Gayle’s children, Taylor and Jamie (who has two children of her own), for lunch at the Reading Terminal Market. It felt so right to spend time with these young people whose mom talked to me endlessly about adopting my daughter, whom we always referred to as Norman O’Gorman until I decided on a name.

Kay, a foodie through and through, almost lost her mind. We hustled to find a table a in the crowded building, with everyone going to different stalls, later finding ice cream and candy for the kids. Local delicacies abound as well as butchers, fish markets, donuts to die for, Cajun food, Peking duck, German foods from Lancaster County, delis, craft distillers, Italian specialties and some really good coffee. It closes at 6 every night, though, so if you want dinner, get take-out. We enjoyed it so much we went back the next day for breakfast at the Down Home Diner and tried the scrapple, which was a little spicy and crisp, almost decadently rich with fried eggs, and so much better than anticipated.

On our way to Ben Franklin’s grave after lunch, Kay and I went to see the Maxfield Parrish mural in the Curtis building. The building once housed the Curtis Center, which was home to the Curtis Publishing Company established in the late 1800s. The publishing company is long gone and the building now houses upscale apartments, but the glass mural is a gem. Originally installed in another location in 1916, Parrish designed it and asked Louis Comfort Tiffany to make the glass tiles. It has been carefully restored and is simply mesmerizing.

Kay and I spent our last day in the city with Taylor, who escorted us to the Rodin Museum and the Barnes Institute. The Rodin Museum houses the only large collection of the sculptor’s work outside of Paris and, while small, it is exquisite and features a formal French garden in which symmetry rules. While it does not boast the large structures found in the Musee Rodin in Paris, it gives you a complete feel for the sculptor’s work as well as many other sculptures by both his contemporaries and more recent artists.

Because both the Rodin Museum and the Barnes Foundation are smallish and near each other, one can visit both on the same day. The foundation was established in 1922 by Albert C. Barnes, who bought thousands of objets d’art in his travels and hung them, seemingly willy-nilly, in his house in Merion, Pennsylvania. The collection was moved to the current location in 2012 and all the paintings and sculptures and furniture were placed as Barnes originally dictated. It’s a little weird compared to most staid museums, but it stays with you for no other reason than it is a wildly imaginative way to view an extensive collection of art.

We finished the day at Dalessandro’s, which Taylor swears has the best cheese steak in Philly or its environs. Located in one of the city’s outer neighborhoods, it is a real hole in the wall with people literally lined up out the door. I love places like this. They remind me of sub shops and local delis (known local as “spas”) in my old neighborhood in Boston. Everything was fresh, the counter people were down to earth and friendly, and the food was as memorable as anything I’ve ever eaten. I get why Jim Fallon frequents the joint.