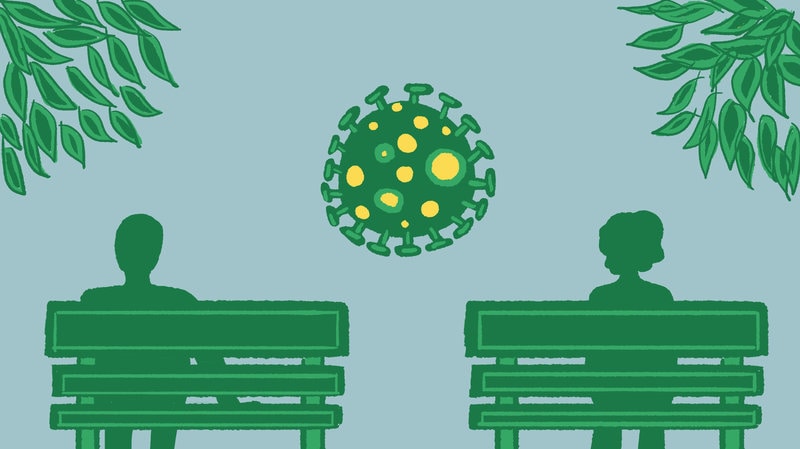 Being that I am a freelance writer and used to spending time alone, the isolation this week was not as bad for me as for other people learning to live a separated life.

At this point most people were sort of, but not really, adhering to the rules. Not me. For the first time in my life, I was doing as told, and doing so in a maniacal way. I was spraying my shoes, avoiding everyone, wearing nitrile gloves. In fact, I began sidestepping people after March 8, the day of my daughter’s last performance for her school play.

I had first starting talking about the virus to friends at the end of December, and by January, tracking numbers and reading every international story I could find. Though math is not my strong suit, I pretty accurately tracked how this miserable drama would unfold. No one wanted to hear it from me even though I started talking about it in January, trying to warn people. I was dismissed and got a lot of stink eye. However, I did stock up on food and filled both my freezers well ahead of the rush. What I did not consider was antimicrobial cleaners and sprays for me or for my circle of older friends. There was much running around and searching that week until my daughter and I had enough cleaning and disinfecting supplies for everyone.

The week felt frantic even though my daughter’s school had closed and we were mostly at home. My heart would race as we donned our purple disposable gloves and swiftly ran through stores, heading only for the shelves holding disinfectant wipes, rubbing alcohol or sprays. We would rush back to the car, out of breath and slightly panicked because just going into a store had become a fearful and unwanted act. Kay and I used disinfectant wipes on our hands, clothes and all surfaces in the car that we touched. We did everything short of shooting nips of isopropyl alcohol.

Two friends passed away, though not from the virus. Still, families could not join them; they died alone and cannot be memorialized until some distant, unnamed date. The most impressive thing I did this week was take a shower and go for a walk. My daughter, who is remarkably adaptable even when shut away from the world for weeks, simply walked around my pajama-clad puddle of a person and did the laundry and dishes until I stopped sitting in front of the television and washed my hair.

I was mad as hell at Trump for not preparing the nation when he knew about the virus. Heck, if I knew about it in January, then he knew, and there have certainly been reports verifying his knowledge and lack of concern. So I wrote to the Hague and suggested he be prosecuted for crimes against humanity when he is out of office. I also wrote to the Southern Poverty Law Center, the ACLU, and Erin Brockovich to see if anyone will prosecute him for negligent homicide when this is over. I posted my actions on social media.

No one answered. I never thought they would.

Then I started worrying about the elephants in Thailand, as they are starving since there are no tourist dollars to feed them. I started writing to rich people to help them and posting my actions on social media. No one answered.

I began to sense a pattern and realized it was starting to resemble the stages people go through when mourning.

I stopped trying to right all the world’s ills from behind my computer. Instead, I planned a stealthy drop-off of birthday presents to a quarantined friend in a locked down boarding school facility. Birthday gifts and a cake were left at the end of a driveway and a mutual friend brought them to her door. Then I went home and we attended her birthday party on Zoom. Weird, but it worked. Of course, everything is weird these days.

I realized my expectations are very diminished, but I’m feeling greater joy when something works out. Just a drive around the neighborhood can lift my spirits. There have been a couple of video chats with different circles of friends and I look forward to my sister-in-law’s inspirational song of the day every morning. In this strange new world, old flames and almost boyfriends have been contacting me, which is flattering, but, um, there is that whole pandemic thing. I told one persistent fellow that he could drive the three hours to my house and I would wave to him, but he wasn’t getting in. That was that, but just how bored is everyone?

Finally heard from the Berkshire United Way, which is organizing volunteers, only to realize that I am not a great candidate due to underlying conditions. I may be able to make phone calls or do something remotely, though. My daughter and I are doing less delivering for our oldsters now as they have sorted out other methods.

We have taken to walking in graveyards as there is little other foot traffic and no one there will bother us, though my daughter thinks we will rile up the residents if we sit on the corner of the larger graves. I told her that we don’t need one more invisible thing to fear, thank you very much.

Have finished “Unorthodox,” “The Tiger King,” most of “Little Fires Everywhere,” dozens of movies, two jigsaw puzzles and approximately 30,000 word games. Mostly, though, I am obsessed by the news and have coffee with Gov. Cuomo every day. I find him calming and reassuring. I am also obsessively checking BNO News as it seems to have the most accurate statistics online.

In order to turn our thoughts from current affairs, we are trying new things. My daughter dyed her hair red, which is a good look for her. Being a little more cautious, I tried out a shampoo bar that comes in a paper package and is completely devoid of plastic. Great idea. Unfortunately, it stripped my hair of every natural oil along with every bit of product and most of the shine. The ends now look like straw. The nice new bar of “shampoo” is now used only for our feet.

I’ve toyed with the idea of restoring my hair myself, but I typed “Ashley Madison” into the search engine instead of “Madison Reed” and found a site where married people can cheat, instead of purchasing chemical-free hair color. I took this as a sign from the Hair Gods to leave well enough alone, having already done enough damage just by shampooing.

I am noticing that I am less anxious and less angry at Trump about the pandemic as time plods on. If nothing else, our new reality shows us how much we can live without, how much is really important and how strong we are. My cheerful daughter is proof that we can manage, even if we do it 6 feet apart while wearing gloves and a mask and armed with a can of Lysol.