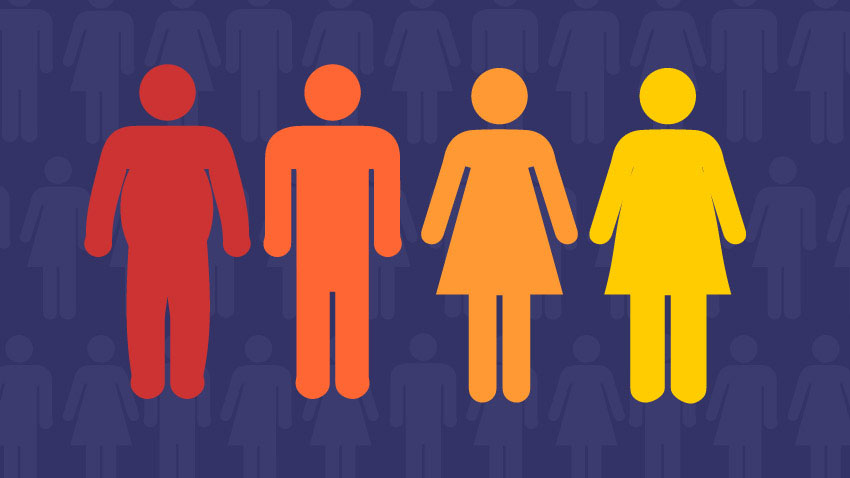 Years ago I went to a doctor in Boston for a nasty skin rash. I hoped to not just heal it, but to find its cause. Instead, the intern sniggered at me and asked, “How many Hershey bars do you eat every day?” I was young; I hadn’t found my voice yet. If I had I would have asked him what that had to do with my office visit. I would have also reported him.

Instead, I stammered something about the fact that I didn’t eat any; I didn’t like them. I felt my face burn with shame. I was happily married, making great strides in my career, yet he cut me down because I was also fat.

Every overweight woman everywhere can identify with this experience: You go to the doctor for a particular problem and it becomes about your weight. I have had several doctors ask me why I haven’t had bariatric surgery. One told me that once I had healed from some minor surgery I needed, I could sign up for the lap band.

My response was always the same: “Why would I? Why would I risk the problems that surgery brings?” After having it, one has a difficult time absorbing nutrients such as zinc or calcium or vitamin D. Patients often turn their addictions in other directions. One man I know had the surgery and lost half his body size, then picked up a crack pipe. He ended up losing his job, his home, everything important to him. I know several women who have had the surgery and gained most of the weight back because there are ways around the various surgeries for weight loss. You can drink milkshakes, eat ice cream, or have high-calorie snacks and avoid real food. Eventually you can stretch out your stomach again.

About five years ago, I needed abdominal surgery and I shared my room with two women who cycled though the adjoining bed. Both had some form of gastric bypass or lap-band surgery. One was quite young and looked like she only needed to lose about 40 pounds. Both were in terrible pain and the second woman was suffering from internal bleeding. It just seemed so barbaric.

That brings me to my recent stay at a hospital in Massachusetts. I needed an emergency procedure and was in the hospital for several days. Though I did not need invasive surgery, the on-call surgeon visited me. We shall call him Dr. No, as in, “hell no, I will never see that man again.” Dr. No, who does a lot of weight reduction surgery as part of his practice, told me that the reason I was having problems was my weight. He was obnoxious, and when I called him on it the next day, he boomed at me in front of other doctors.

After I told the nurse on duty not to let him into my room again, that he was fired, I heard her tell another nurse that, “Dr. No was his usual self; she doesn’t want him in her room again.” I then started asking around and heard the word “jerk” twice and several people told me he was a good surgeon, but had a terrible bedside manner. Mostly the responses I heard were negative, though with one exception. I asked a quite overweight man about his experience with Dr. No and he could not say enough good things about him. When I asked if his weight was discussed, he told me it never came up.

Upon my return home, I called the surgeon in Boston who operated on me in 2012 and he told me that my current condition was caused by my past three abdominal surgeries. We discussed the fact that I probably hurt myself in the gym trying to tone up and lose more weight after losing an enormous amount in the last 16 months. I still have more to go, but the irony of getting hurt while trying to get healthy was not lost on me. Neither was it lost on me that the doctor who tried to shame me should have actually had a discussion with me about how I hurt myself and what I should do about it. He should have LISTENED.

I started asking my friends if they had ever had a condition ignored because of weight. Two friends had both been sent home with serious injuries to their legs after being told to lose weight, that they probably had arthritis. Everyone I asked was a woman and each had a similar story: that regardless of why they went to the doctor, weight often became the focus.

Why? There is not a single chunky person on this planet who does not know they are overweight. Pointing it out when you go to the doctor for bronchitis or a torn ligament is just cruel, and it makes the patient feel less than dignified and certainly less than heard.

Trying to repair this kind of ignorance is like tilting at windmills, but every time it happens, we should complain. I certainly will be calling the patient advocate at this particular hospital and I made quite the stink when I was in there. I complained about Dr. No to anyone who worked there, including his colleagues. And I can only say that he was lucky my friend Barb was not there, because when I told her what he said to me, she replied, “I would have unhooked that tube you were attached to and sprayed him with anything that came out.”

She made me laugh so hard it hurt, but I think I will stick with just writing a complaint. Age may have given me a voice, but I am not yet at the point of pelting someone I don’t like. Although, if anyone mentions weight loss surgery to me just one more time . . .