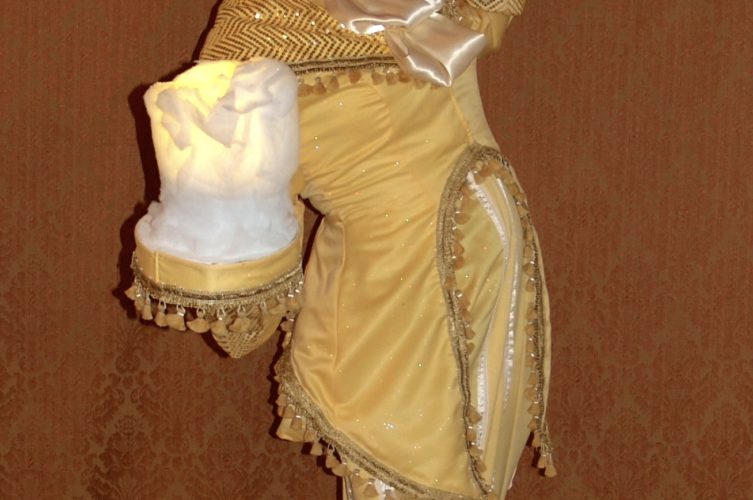 Editor’s note: Boxxa Vine’s March 13 performance at the Foundry in West Stockbridge has been postponed to a later date yet to be determined.

The Berkshires have changed a lot in the past 25 years. Our population has grown much more diverse, and the restaurant, coffee shop, and café situation has greatly improved. We have theater and concerts all year and more movie theaters than back in the day. And now we have a burgeoning new form of entertainment: our own resident drag queen Boxxa Vine and her company Out of the Boxxa Productions, located in Monterey.

A self-described “hermit in the woods,” Boxxa talks fast, moves quickly and is brimming with ideas to bring entertainment to our local masses. After working for several years in Florida for Universal and Disney as an entertainer, she moved north about seven years ago to Monterey, through she grew up in Colrain.

Boxxa, who is turning 30 March 13, is celebrating her natal day with a show at the Foundry: “Dragged Through Disney” at 7 p.m. In an effort to bring drag to the masses, Boxxa keeps the prices low. The material, though bordering on risqué, stays closer to PG-13. Her shows are energetic, funny and replete with many costume changes and bouncy music.

Rochelle O’Gorman: I know your given name is Aaron Johnson. Which do you prefer, Aaron or Boxxa?
Boxxa Vine: It doesn’t really matter to me which name you use. If it’s about drag, it’s always easier to refer to me as Boxxa so people get used to it. I am going on seven years of drag and I have friends who never knew my real name and even when they knew it, still referred to me as Boxxa.

RO: How did you come up with that name?
BV: Actually, my original drag name was based on my idol, Patti LuPone, and it was going to be Patty ParaDice, like pair of dice. I wanted a pun name. It took a while to find one not already claimed.

The only other person with a name close to mine is (the drag queen) Franz Zia. I used to tell people that my name was Boxxa Franzia Vine, but they sent me a cease and desist. [She is joking. The box wine folks did not actually pursue Boxxa.]

RO: Do you prefer the feminine or masculine pronoun?
BV: While admitting that pronouns are very important to some people, I am the kind of person who does not have a preference, because half the time I dress up like a lady and half the time I am in sweat pants and regret.

I have no preference because I don’t think being called male or female is a disrespectful thing, but it is easier to be referred to as feminine while in drag and masculine when in other attire.

RO: And how did you choose this particular profession?
BV: Just watching “RuPaul’s Drag Race” when it hit Netflix for the first time, I thought it was dumb and I wondered why anyone would want to dress up as a woman. I got to know the girls, but originally I thought it was really stupid. By season four, when they had more alternative queens and not just men trying to pass as women, I got it. It is literally theater. And I thought, “I want to do that.”

RO: You moved back here from the busy life you led in Florida. You were only about 23 and living in an isolated area. How did you even get started?
BV: I didn’t know anyone and didn’t know what to do with myself. I started playing around with an old sewing machine and discovered I had a real gift for it, so I started creating clothes and costumes. Then I got mom and dad hooked on watching “RuPaul’s Drag Race,” so I opened them up to the idea that drag is cool, and “Oh, by the way, this is what I want to do.”

RO: Didn’t you think the area would prove difficult for such alternative entertainment?
BV: This is where I live. And my choices were very easily received … I have never really had pushback in the area. We had three protestors at Berkshire Pride this year. [laughter] I guess we made it — we had protestors!

When I performed at Six Flags in full drag, some guy said, “What is that?” and a teenager behind me said, “Something better than you!”

RO: Do you think drag has changed over the years?
BV: Drag changed around season four of “RuPaul’s Drag Race.” He [RuPaul uses both pronouns] created a hierarchy system and changed the business. In the early shows, the performers are wearing stuff from the mall and it passes, but now everything is couture and designer and very pricey. Technology helped changed things as well.

(By season four) when they had more alternative queens and not just men trying to pass as women, I got it … I am not pretending to be a woman. They call it “old-school drag” because that was a very camp thing. It wasn’t as much this fashion model thing that people do now. There were certainly beautiful people, but they did not have the product that we now have, or the tutorials.

RO: I know you are creating shows to bring to other venues, but how do they differ from other drag shows?
BV: I use a lot of musical theater, which, compared to pop music, tells a story. We are not creating a drag show; we are creating a mini-theater production with drag queens in it.

RO: Do you audition for other shows?
BV: All the time. Recently, I auditioned for the HBO series that is coming out soon about drag queens in rural areas and was rejected because I was told the Berkshires seemed too accepting of gay people and they wanted places with more pushback so they would have more story.

RO: What character do you most like to perform?
BV: I could do Dorothy night after night. But also Winifred [from the movie “Hocus Pocus”] and Lucille Ball.

I started doing Lucy because I was booked at a Botox clinic that already had a Cher and a Marilyn impersonator. I won for best impression when doing her Vitameatavegamin act for a contest, only I use a bottle of Jägermeister.