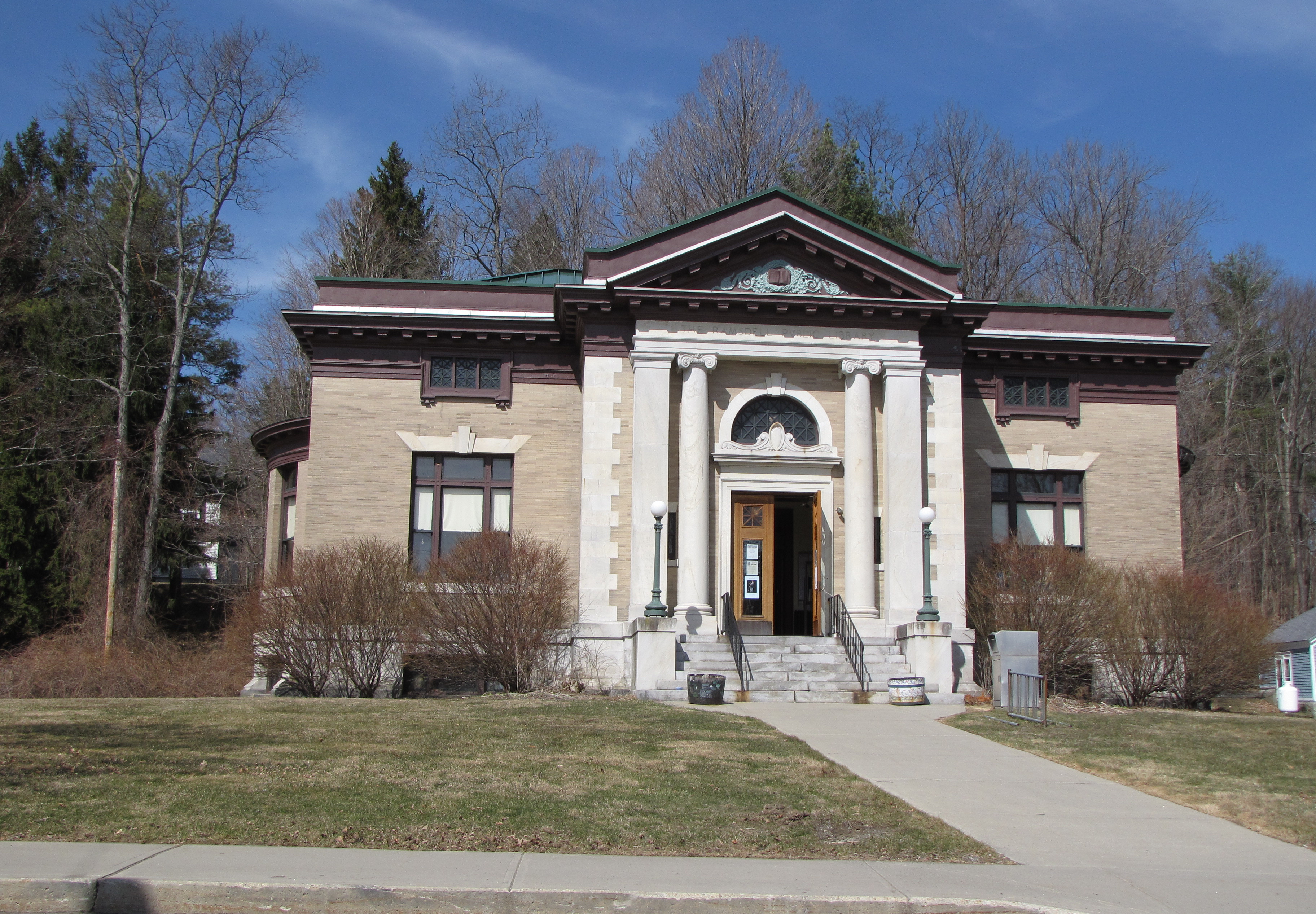 The Ramsdell Library in Housatonic, once again the subject of budget cuts as the Great Barrington Selectboard seeks to trim the 2018-2019 budget by cutting back on the two town libraries. Photo: David Scribner

Great Barrington —After a winter of discontent, budget season is continuing into what is passing for spring in Berkshire County. And invariably that means cutting spending — or eliminating increases that had been proposed.

Nowhere is there a better example of that truism than in Great Barrington, where the ritual of cutting budgets generally centers on what the Selectboard could characterize as inessential. Town employees, most of whom have union contracts, cannot have their wages or benefits reduced. And town officials are loath to eliminate their positions. And insurance for the town and its employees, along with debt service, is typically considered a fixed cost

So that leaves discretionary spending — things like supplies, services, staff training and non-union part-time positions. Many of those items were cut or trimmed in this year’s proposed town budget. Click here to view the $11.3 million spending plan unveiled by Town Manager Jennifer Tabakin at Wednesday’s public hearing before the Select Board and the Finance Committee.

Also left in place was a $12,000 cut from the parks programming and management budget. The two panels disagreed on whether to cut the wages and hours of parking enforcement officer Connor Storti from $15,000 to $10,000.

But the cut that seemed to hit closest to home was to the town’s public library system. Last month, Tabakin was asked by the Selectboard to suggest ways to pare $200,000 from the town budget she had prepared earlier.

Click here to read a memo to the Selectboard and Finance Committee from Tabakin recounting the history of the budget season to that point, along with the options she had put on the table to achieve the reductions.

On the table for the library were a 29 percent cut in office supplies, a 19 percent in programming supplies, 43 percent from staff training and travel, and cuts of $3,000 and $4,000 from the lines covering nonprint materials and books and subscriptions, respectively.

Still, the total library budget proposed for fiscal year 2019 is $537,410, an increase of 4 percent from this year. That total does not include benefits for library employees, which is covered under a different line in the town budget.

Patrick Hollenbeck, who chairs the library system’s board of trustees, said in addition to serving the general public, the library serves people who cannot otherwise afford Internet service, books or videos.

For some people, especially for those who are down on their luck, unemployed and looking for a job, the library is their only means of accessing the Internet. Hollenbeck noted a statistic that got the audience’s attention: since July 1, 2017, the Great Barrington libraries, including the Mason downtown and the Ramsdell in Housatonic, have provided Internet access for patrons 10,597 times.

And Hollenbeck bristled at the notion that staff training was being cut: “Librarians now are preparing themselves for the 21th century. They are digital mentors. If we don’t provide the training for them, then they won’t get it.”

Hollenbeck also pointed to community events held at the libraries that bring people into town, such as the well-attended program held at the Mason last summer to celebrate the solar eclipse.

“We had a really large crowd downtown in the middle of the summer,” Hollenbeck explained. “We provided an astronomer and crazy sunglasses. Those people probably went and they shopped in town while they were here.”

Daniel Seitz, treasurer of the Berkshire Co-op Market’s board of directors, said he is a regular patron of the Mason Library and lauded its staff. He characterized it as a “vibrant part of the town” and cautioned against budget cuts.

“It provides a great set of resources,” Seitz said. “Investment in education and knowledge increases vibrancy and well-being.”

Front Street resident Margaret Heilbrun has lived in town since 1959 and went to the Mason as a child. She described it as “a joyful place to go.”

Local businesswoman Ilana Siegal also objected to the library cuts. She asked if there is something the community can do to offset some of these budgetary concerns?”

“Sometimes the easiest thing to do is cut some of the lowest hanging fruit but sometimes it’s a matter of taking a bigger picture and stepping outside and seeing what can be done for the community as a whole.”

Rather than cutting the libraries’ budgets, Hollenbeck told the selectmen, “I’m asking you to find other sources of revenue to fill the gap.”

In a follow-up interview, Hollenbeck pointed to a Providence, Rhode Island, traffic camera program instituted in 2014. The city installed 25 so-called “red-light cameras” that identify motorists who run red lights and send tickets to those determined to be violators.

Since installing the cameras, “the city has seen a tidal surge in tickets issued. And revenue,” according to the Providence Journal. The program generates more than $1 million in revenues for the city. One camera in a key location generated nearly $530,000 in fines over the course of only 10 months.

Hollenbeck also suggested asking some of the well-to-do nonprofits if they could give us any more.” It was a reference to larger nonprofit organizations such as Fairview Hospital and Bard College at Simon’s Rock. Nonprofits are typically exempt from paying property taxes. Selectman Ed Abrahams, a former library trustee, replied that Tabakin was working on an appeal to nonprofits.

Hart Street resident Bob Van Olst said he moved to Housatonic about a year ago and visits the Great Barrington libraries often. He seemed worried that in these challenging times, the town might be tempted to close the smaller Ramsdell.

“It is such a rich resource beyond the books. It is an architectural jewel,” Van Olst said, referring to the Ramsdell, a Classical Revival structure built in 1909 as a gift from T. Ellis Ramsdell, son of the owner of Monument Mills. “Is there a potential for losing one of the libraries?”

There was a momentary pause, after which several selectmen said no and shook their heads. That was followed by applause.

But the possibility of closing the Ramsdell has clearly been a source of concern for the libraries’ trustees, as well as Friends of the Libraries, a separate group that handles fundraising and community outreach initiatives.

The friends have tried to increase the Ramsdell’s profile in the community, opening that library on a limited number of Sundays, though the initiative was the subject of a brief labor dispute among library staff. In addition, the trustees have increased special programming at the Ramsdell.

On Monday and Tuesday of this week, the trustees are bringing in a consultant to conduct a public forum on the future of the Ramsdell and “rethinking the role of libraries in the 21st century and beyond.” Click here to view the flyer.

A year ago, Holly Hamer, who heads the Friends of the Libraries, wrote a letter to the editor of The Edge entitled, “Ramsdell Library at risk — again.” The letter was in response to a curtailment in the Ramsdell’s hours of operation

“A sharp reduction in hours (with a jumbled schedule that a spelling bee champion couldn’t remember) will hasten the demise of this venerable community beacon,” Hamer wrote.

In an interview, Hamer said she felt the need to speak up because it appeared “the Ramsdell was being starved to death.” In addition, while there was recently an emergency repair to the chimney and roof, the Ramsdell hasn’t had a major renovation since 1930 and remains handicapped inaccessible.

Hamer said the last time there was serious consideration given to closing the Ramsdell was in 2010 when a petition to shutter it — circulated by a Housatonic resident, no less — was put on the warrant for the annual town meeting.

A Facebook page was promptly formed by opponents of the petition. A stand-in on the front lawn the Ramsdell attracted more than 100 people a couple of months before the town meeting, where the petition was rejected.

Hamer said it would be a shame if the Ramsdell were ever closed. The village of Housatonic has lost several iconic symbols of its past. The mills that bustled during the village’s glory days now sit mostly empty.

The United Methodist Church closed less than 10 years ago. While there are plans for a redevelopment, the Housatonic School has remained mostly empty since the Berkshire Hills Regional School District consolidated its campus in 2003 with a new elementary- and middle-school campus on Monument Valley Road. Most recently, the village lost an important eatery, retail establishment and social center when the Housie Market and Cafe closed in October.

“Our feeling in the village of Housatotic is the Ramsdell is seen as a beacon,” Hamer told The Edge. “Closing it would have serious consequences on the morale of the town. Politically, the people of Housatonic have spoken out very clearly that they want this library.”

“People are always asking ask why we need two libraries,” Hollenbeck told the Edge. “But the needs are getting greater for libraries — not less. At what point does the madness stop?”

In the end, the cuts to the libraries stood. The five-member Finance Committee was deadlocked on the issue. Chairman Tom Blauvelt disqualified himself from voting because his wife Marie is a library employee. And Abrahams’ motion to restore the library funding failed and a subsequent motion to sustain the cuts passed 3-2 with Abrahams and Bill Cooke dissenting.