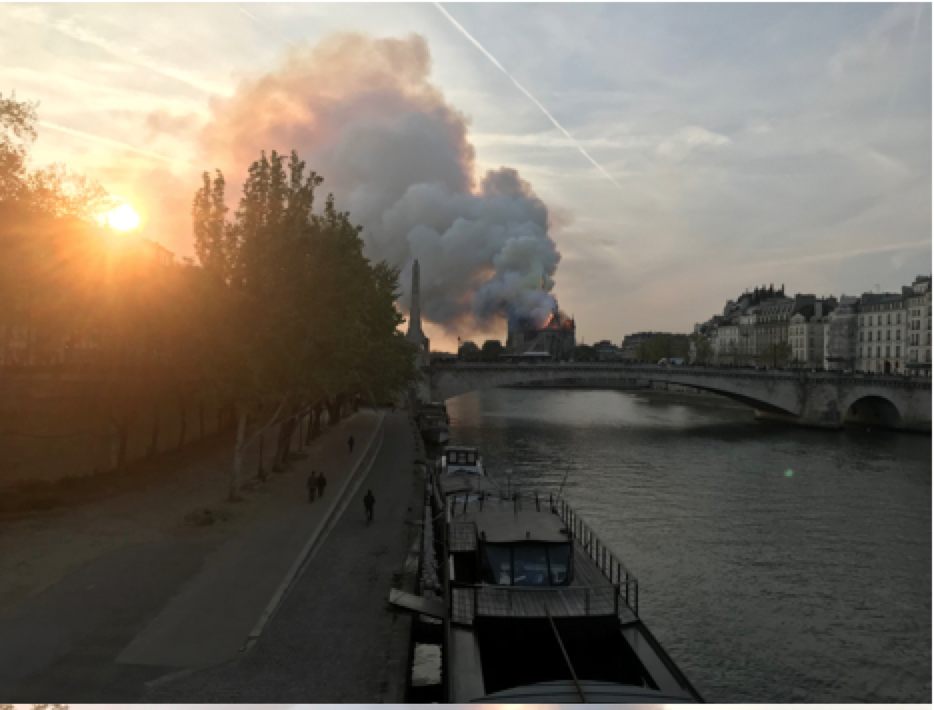 An American in Paris crosses the Seine on her way home from school, 7 p.m. on a Monday evening, and out of the corner of her eye, through the chaos of scooters and bicycles weaving in and out of cars, she sees a crowd gathered across the street.

Upon turning her head, she becomes confused at the shadow blocking the blue evening sky—this can’t be right, she thinks, as she registers the smoke engulfing the top of the Notre Dame and the orange glow beneath the pyre.

In Paris, a city of gray, white, and beige, orange offends.

Scooters and bicycles are abandoned in the middle of the road, cars beep and sirens blare, people who can’t stop their vehicles hang out their windows for the few seconds it takes to cross the bridge. She makes her way to the other side through halted traffic and joins the people fixated on the dream sequence happening downriver.

For 20 minutes, a dream—the Notre Dame aflame, her wooden bones feeding an enormous cloud of smoke, through which the setting sun glints. A fire of this physical scale goes beyond the five senses into previously untapped feelings of smallness, wonder, and loss. After that, cathedral still burning, the world calibrates back to normal.

And as she adjusts to this new reality, she realizes she’s just waiting for something to fall. Behind her, police officers shout at drivers who have stopped to take photos, and then they close the road to traffic.

When she finally turns around, after what was probably an hour but felt much shorter, the bridge is full of people. People transfixed by the ghastly sight, most everyone on the phone speaking quietly in French and English.

When the spire falls, first the top and then, a minute later, the rest, there are two collective gasps on the bridge. In between, the scene is eerily hushed, marked by the almost constant wail of sirens and the occasional boat motoring along below. The crowd watches the firefighters’ futile efforts, and in the span of less than two hours the Notre Dame is reduced to two boxy towers behind a glowing, half-melted scaffolding skeleton.

When it finally seems like the worst is over and everything flammable has been consumed, and she can see the sky behind the smoke, she runs the mile and a half back home. By that time, most of the people on the bridge had dispersed, and once she crossed the police barriers and the Notre Dame disappeared, Paris looked just like it had that morning on her way to class.

Her host mom cried over dinner at the loss of a landmark she had held close to her heart since she arrived in Paris more than 20 years ago, but they smile, too. The fire continues into the night, its orange glow still marring a sea of black and beige.

In the aftermath, the outpouring of international support on social media makes her melancholy. Melancholy for the loss she just witnessed, but also for those who have suffered much worse than France did that night and for whom the world did not stop in solidarity. So many lives and beloved monuments have been lost in the violence of warfare and colonialism, and these losses were never honored—or even acknowledged—by anyone.

Paris will be OK, the Notre Dame will persevere, but very few cities are so lucky. If the destruction of part of one beautiful, historical building can be felt so deeply by a country at peace within its borders, imagine those who are plagued by drone attacks, whose sadness at the loss of holy sites pales in comparison to their sadness at the loss of loved ones, safety, and hope. Imagine them, and honor them with the same attention you gave the Notre Dame the other day, because then maybe we can put an end to their grief.