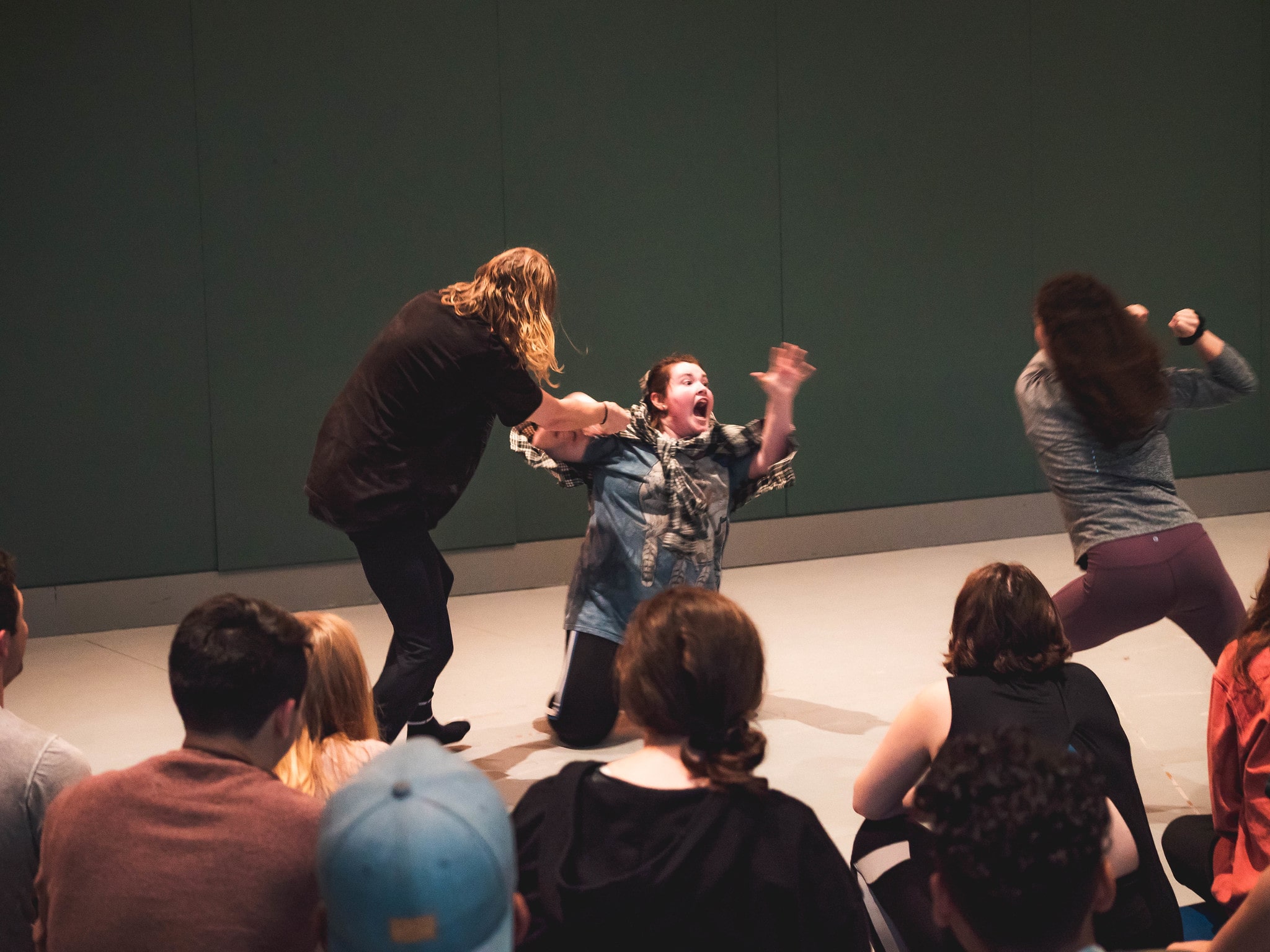 Lenox — William Shakespeare, at the height of his career, was an actor, a stakeholder in a company of fellow players, a playwright and a poet. His plays, totaling at least 37, were written to be performed; in order for audiences to encounter these works as Shakespeare intended, they must be experienced in performance. Last month, 39 young actors converged upon a proverbial central stage—a stone’s throw from the Rose Footprint Theatre, a reconstruction of the first level of the Bard’s first London theater—as Shakespeare & Company’s Summer Training Institute kicked off. The four-week program, one aimed at actors ages 18–25, affords participants the opportunity to immerse themselves in the actor/audience acting approach and pedagogy of the Company.

“I’m excited to help create a space where 39 students from around the world have the opportunity to delight in Shakespeare, poetry and, perhaps, themselves,” said Michael F. Toomey, a senior faculty member at the Summer Training Institute and company member at Shakespeare & Company for nearly two decades. The Summer Training Institute, targeted for undergraduate theater students, recent graduates, and early career acting professionals, has attracted participants from all over the United States; this summer, the program is hosting international students from Australia and the Marshall Islands.

“As a musical theater major at my school, I was looking to expand my skill set into a realm that I don’t get to play much in, and that is Shakespeare,” stated Coastal Carolina University junior Emily Dye. “I wanted training that would be rigorous yet freeing in a non-school environment and decided the Summer Training Institute would be a good fit. Almost two weeks into the intensive, I have discovered a fiery passion for this work that has brought forth an awareness of myself and has made me feel strong and more confident of my artistic ability. I feel as if I am expanding myself to its full potential, and that is extremely thrilling.”

At the core of Shakespeare & Company is its professional actor training, the aesthetic of which was created within the training devised by founding artistic director Tina Packer. Through the Center for Actor Training, Shakespeare & Company’s founding artists and teaching faculty have developed a common artistic vocabulary and coherent approach to performing Shakespeare that provides a solid foundation for their work. Modeled after the Company’s internationally acclaimed Month-Long Intensive, the Summer Training Institute provides young actors the opportunity to immerse themselves in Shakespeare six days a week for four weeks at the beginning of the summer performance season. For participants, it can feel like hitting the jackpot.

“From a young age, Shakespeare’s work has always been an integral part of my life whether it was a conscious choice or not. In primary school, we learnt his phrases; in high school, we read his plays; and in drama school, we played his characters,” said Verity Wood, an international student from Melbourne, Australia. “This summer at Shakespeare & Company, I am learning the true significance of living his text. Through the uniquely thoughtful structure and generous mentoring, I have inherited a profound skill set, which I believe I will always refer back to throughout the duration of my career and life.”

The program includes daily classes in Linklater voice work, movement, fight work, clown, Shakespeare text, Elizabethan dance, and an in-depth exploration of the actor/audience relationship. In addition, participants attend master classes with the Company’s world renowned faculty—including Packer—and engage with Company members in an inquiry of rehearsal methods, and attend Shakespeare & Company rehearsals and performances. Shakespeare & Company’s curriculum is internationally recognized as a deeply effective training experience for actors who aspire to bring their talent, intuition and spirit to a higher level.

Shakespeare & Company was founded in 1978 to create a theater of unprecedented excellence in performance, training, and education. The organization aspires to perform as the Elizabethans did—in love with poetic language, visceral experience and the mysteries of the universe while rooted in the classical ideals of inquiry, balance and harmony. There is even space for “groundlings”—up to 250 of them—in the Rose Footprint Theatre, which means an authentic and rousing experience awaits those who venture to the sprawling Kemble Street campus. So if, in fact, “all the world’s a stage”—as suggested by the melancholy Jaques in Shakespeare’s comedy “As You Like It”—“and all the men and women merely players,” leaving them to their “exits and their entrances,” while “one man in his time plays many parts” until they depart Monday, June 24.