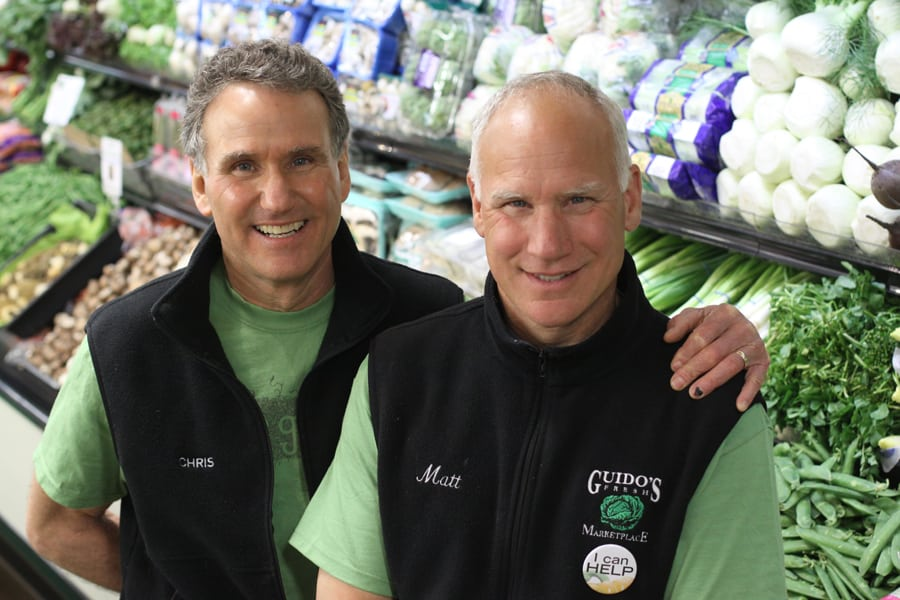 Great Barrington — Luke Masiero got his first job — bagging groceries at Guido’s in Pittsfield — when he was 13 years old; he moved on to produce, working largely behind the scenes, and stayed connected with the burgeoning business until he went off to college. One might say he had a shoe in, considering that owners Matt and Chris Masiero are his father and uncle, respectively.

It was the spring of 1979 when the two brothers opened a small, seasonal roadside produce stand in Pittsfield. Each night, Matt would take their trusty second-hand box truck down the Mass Pike to the Chelsea Produce Market to glean the most beautiful produce he could find. Before the sun came up, he was on his way home, where his brother, Matt, was waiting to help unload the bounty. The brothers worked hard to convey the Italian concept of “abbondanza,” or “abundance,” with everyone who came through their doors. Suffice it to say, four decades later, they have been wildly successful.

The store’s moniker — a nod to Guido, father of the Masiero brothers — came out of respect for everything the family patriarch stood for. “He was really into a healthy lifestyle, he always exercised and really pushed a healthy diet,” recalled Luke Masiero of his grandfather, who was a physical education teacher in Manchester-by-the-Sea on Boston’s north shore. Rena, his wife, hailed from Lee, so weekends were spent visiting family in the Berkshires. The brothers’ clever idea required $2,000, which they borrowed from their father to purchase a truck, and the rest just fell into place — at least it would appear that way to the casual shopper.

The original Guido’s Fresh Marketplace — located just north of the current Pittsfield store, where Berkshire Flower Company operated beginning in 1987 — was recently razed. I grew up shopping in that store and must have been a scant 5 years old that first spring the Masieros were in business. I have two memories of the space, neither of which revolves around fresh produce: First, it was pretty chilly inside, so my sister and I would huddle by the pot-bellied stove in the right-hand corner while my mother perused the fruits and vegetables; second, you had to bring your own bags — likely brown paper from Price Chopper. It’s funny how things can come full circle in 40 years.

It’s no accident that Guido’s is considered the premiere purveyor of quality produce in Berkshire County. Locals to the Berkshires largely regard the store as a gem, as do visitors from near and far. With 40 years under their collective belts, the next generation of Masieros is already in place to run the business. “It’s great that there are a few of us involved,” said Luke Masiero who, at the age of 29, is slowly rising through the ranks to inherit this veritable legacy — one that includes 250 employees — among them his cousin, Anna Masiero, daughter of Chris and part of the Guido’s Pittsfield Cafe team.

The month of September has been rife with celebration. Things kicked off with a staff party where the highlight ended up being a film put together by Marco from the Pittsfield store. “It was pretty incredible,” explained Luke Masiero. “He interviewed everyone from Rena —Matt and Chris’ mom — to employees who have worked here for 20+ years and there wasn’t a dry eye in the room. You could feel it — a lot of love in the room,” he added from a sunny spot on the outside patio Wednesday morning.

This outpouring of support from the community has been the status quo this month. Luke Masiero, currently the front end manager in Great Barrington, has become a familiar face for hundreds of shoppers. As to the next phase? “We’re really excited about the upcoming renovation and expansion of the [Great Barrington] store,” he said, which slated to begin in March 2020 if all goes according to plan. “We will expand the store on the south end, toward where the solar panels are now, and the solar panels will provide all the electricity for the Guido’s operations there. We’re working with Chuck Bomely of Plan B Design in Connecticut, and we have great ideas and great plans,” the brothers told The Edge in a September 2018 interview. Matt and Chris Masiero, who opened their Great Barrington store in 1995, were celebrated at this time last year as the 2018 Business Persons of the Year by the Southern Berkshire Chamber of Commerce. Over the ensuing decades, the business has flourished due to abundance — of customers, family, community and great food. To sweeten the story, stop by either location at 3 p.m. on Thursday for cake and ice cream. And cheers to the next 40 years!