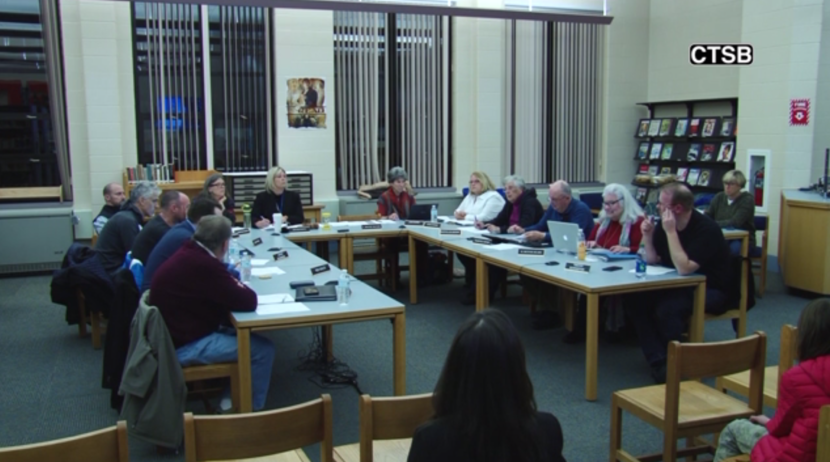 All in a week at SBRSD: Bomb threat; an illegal vote; angry School Committee member walks out

Editor’s note: This article has been revised to correct a misimpression about Superintendent Beth Regulbuto’s evaluation and to include links to her goals for 2018-19 and her first-year evaluation.

Sheffield — After a challenging autumn, the first and smallest K-12 regional school district in the state has had yet another rough week.

A bomb threat on Friday prompted the evacuation of the Southern Berkshire Regional School District campus in Sheffield. No one was hurt, students were evacuated to the private Berkshire School, and no bomb was found. Parents, however, were rattled by late-morning emails and text messages they received from Superintendent Beth Regulbuto.

See image below of text messages sent out by the superintendent’s office: 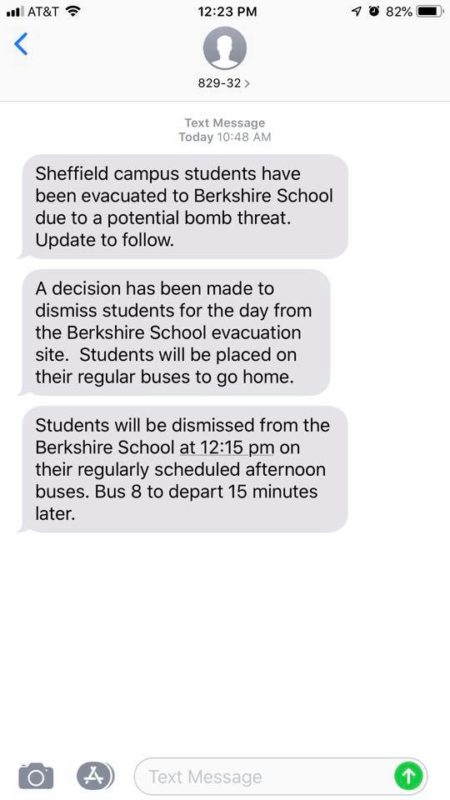 The district has been in a stand-off with one of its member towns, Egremont, over the resumption of classes at the tiny South Egremont School, whose operations, after a recent renovation, were suspended by the district because of the discovery abnormally high levels of lead.

In retaliation, an angry Egremont Selectboard passed a resolution in October to withhold hundreds of thousands of dollars in payments to the five-town regional school district until the matter was resolved. 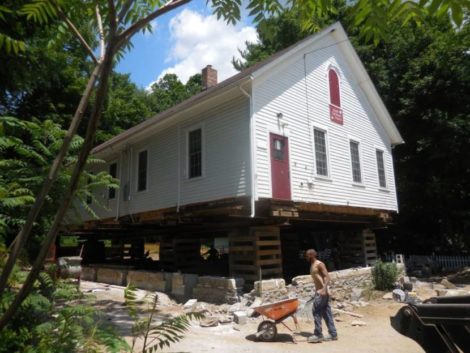 A worker from Salco Construction Company Inc. in Pittsfield wheels material around the exterior of the Egremont Village School. Photo: Terry Cowgill

The Selectboard was already miffed at the School Committee’s decision in 2016 to put the Egremont school on hiatus — an action which prompted a lawsuit from the town of Egremont that was later settled.

When a settlement over the withholding of payments was discussed at Thursday’s public meeting of the regional school committee, longtime member and finance subcommittee chair Dennis Sears walked out of the meeting, complaining that it would be “extremely foolish” to sign the document and insisting he was going to resign over the matter.

Earlier in the meeting, there had been other surprises: Chairperson Bonnie Silvers of Sheffield, had been ousted from her leadership position on the committee, and Sears was denied a bid for vice-chair. Adding to the committee’s woes was that the vote was taken in open session, but by use of a secret ballot — a clear violation of the state’s Open Meeting Laws, the Edge has learned.

Click here to read a guide to the open meetings law. No public body in the state may vote by secret ballot, whether in public or behind closed doors. Scroll to page 16 to see the relevant section. Or see the image below:

Also during Thursday’s meeting, Regulbuto’s goals for 2019, developed with the Executive Evaluation Subcommittee, were discussed. Click here to view the goals and click here to view her first-year evaluation in which she was rated “proficient” overall.

Click here to view the on-demand video recording of Thursday’s meeting by Community Television of the Southern Berkshires. Fast forward to approximately 2:25:00 to see the brief discussion on the evaluation that was unanimously accepted by the school committee.

Sears, who was first elected to the school committee in 2008 and was just re-elected last month, left a voicemail for The Edge on Friday but declined to comment further. 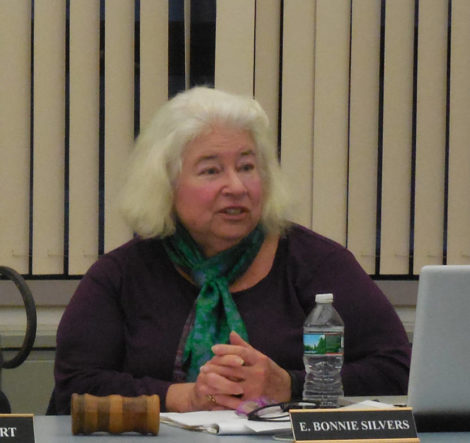 “It did get a little heated at our meeting last night over some issues that might have been discussed, but basically you don’t resign until you actually send a letter and I have not sent such a letter,” Sears said.

The agreement that rankled Sears was passed in executive session earlier that night. It said that the South Egremont School would open on or about Jan. 2, contingent up the completion of appropriate actions to remediate the lead inside the building, using lead remediation painting, along with the setting up of an appropriate perimeter, Silvers said.

To address the concerns of Sears, the settlement will be modified by the district’s attorney to the effect that the district will be held harmless should there be any issues related to the wellbeing of the children who will be attending the program starting next month in South Egremont.

In other words, the district and its School Committee members could not be held liable if children and staff were harmed by the condition of the school, even after the remediation efforts.

But Sears wanted to see the precise language that would be inserted and then have the agreement come back to the School Committee for another vote. The settlement and stipulation had already been approved in executive session earlier in the evening, with Sears the lone dissenting vote. Newly installed chairman Art Batacchi would not entertain a motion to revisit the vote.

“I’m sorry mister chairman; I resign; I’ll be leaving,” Sears said, raising his voice. “That’s it, we would be … I’m not going to be that foolish.” There was an awkward silence as Sears’ colleagues watch him retrieve his hat and coat from the other side of the room and leave the building. 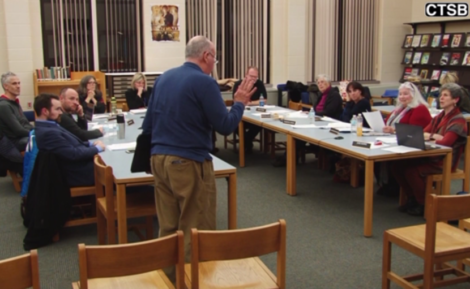 School Committee member Dennis Sears announces his resignation and walks out of Thursday’s meeting in protest over an agreement with the town of Egremont concerning the reopening of its community school. Photo: Courtesy CTSB

In a subsequent interview, Silvers, who is viewed by most as ally of Sears, said “a number of people” have since spoken with Sears and that his concern centers on the “need for protection” of School Committee members individually.

The emotional episode happened after Sears and Silvers, both of Sheffield, had been denied leadership positions on the committee. Since Thursday’s meeting was the first for the committee since the November elections, Regulbuto acted as chair until officers could be elected.

Sears nominated Silvers as chair. Silvers, an experienced retired educator, had chaired the committee for the past year. Newcomer Tim Schroepfer nominated Art Batacchi Jr., who had served previously on the school committee for four years in the late 1990s and is a current member of the Sheffield Conservation Commission. Batacchi is also a graduate of Mount Everett Regional School and sent his children to the district as well. 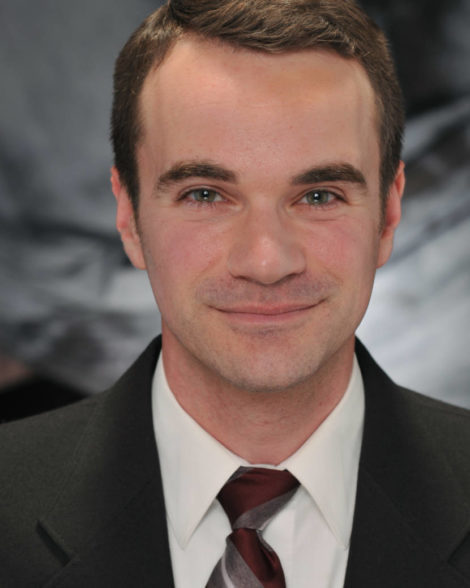 School Committee member Maryellen Brown of Monterey proposed that the members vote in a secret ballot. Only Knox objected, “in the name of transparency,” he said. So the secret vote proceeded and makeshift ballots were passed around. Batacchi emerged the victor and Schroepfer won the position of vice chair over Sears, whom Silvers had nominated.

In a text message on Sunday, Silvers acknowledged that the vote was illegal. She said a revote would occur on Thursday.

Meanwhile, the next morning both State Police and Sheffield Police responded to the bomb threat at the campus on Berkshire School Road. In an email shortly after the threat was made, Regulbuto said, “There was a report of a potential bomb threat at the Sheffield Campus. All students have been evacuated and are headed to Berkshire School in accordance with our evacuation procedures.” 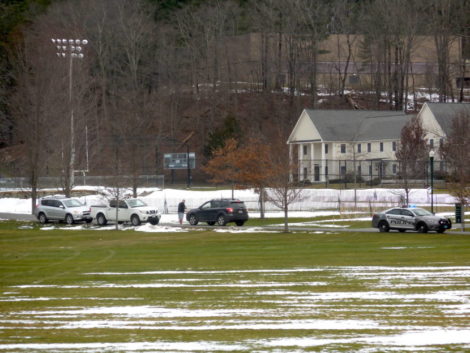 A Sheffield police cruiser and other vehicles stand watch at the driveway entrance of Berkshire School on Friday morning.

“There will be an investigation, but the kids were all accounted for because we followed all the protocols and everyone has been trained,” Silvers told The Edge. “Everything went as it should have.”

Ironically, it might have been one of the few public events in the district that went precisely as it should have that week.