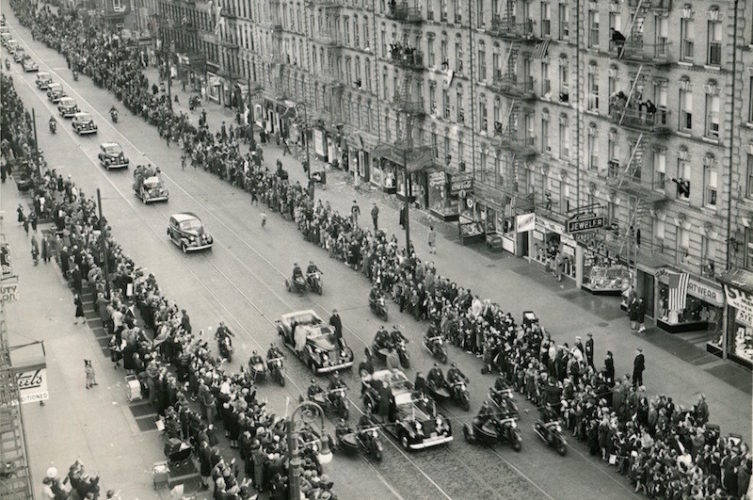 Recently, I wrote about my aging and fear of mortality. I tried to be as true to my feelings as possible, but as my wont, I engaged in selective revelation, so there are multiple perceptions and states of mind that I left unwritten that will never see print. Still, writing about aging has brought me back to my childhood — invoking a more innocent and less intricately remembered and understood time. I have written about childhood before, and please bear with me if I repeat myself.

One of my first memories was sitting in my grandparents’ cramped, musty dining room with its busted sofa, my father listening to a Giants football game on a big Philco radio, when it was abruptly and ominously interrupted by the announcement of the attack on Pearl Harbor, Dec. 7, 1941. I was all of two-and-a half then, and it was one of the most vivid memories I had of the war. I don’t have too many clear recollections of those years, but I can recall ration books, air raids, newspaper collections, and editorial page cartoons of Hitler, Stalin, and Mussolini dominating the tabloids. There was also the 1945 FDR funeral train that slowly wended away its way through the Bronx to his final resting place in Hyde Park. FDR was an outsized and revered figure in the world of my parents and their friends, and there was a great deal of silent mourning over his passing.

Most of my earliest school memories are blurry. I was in the hospital with salmonella for a long time (in quarantine, where I was cut off from other children by a glass barrier) and returned home only to get measles. Recovery from my varied illnesses that year seemed to take months, and I missed at least a third of the first grade. The next year I attended parochial school (yeshiva), a short bus ride away, to be imbued with Jewish tradition — both of my parents had rabbinical fathers and thought the school would cement my link to the religion. It had the opposite effect — pushing me away altogether. I attended the yeshiva for five unpleasant and alienating years.

I remember that time too well — long, tedious hours of rote learning of the Talmud and Torah, and Hebrew teachers who used corporal punishment whenever you talked in class. The school operated in a converted old telephone building, and had a rickety, unsafe outdoor set of steel stairs (these stairs appeared in my nightmares, which centered on mangled bodies and falling through space as the whole edifice collapsed), and a stifling atmosphere that undermined much that should be exhilarating and buoyant about one’s early school years. I was eager to learn, and read voraciously at home, but my imagination wasn’t fed by most of my teachers. There was great deal of memorization, and little was offered to reflect on or dream about.

When I think back to my childhood, it’s the sense memories of neighborhood streets and people rather than the daily family interactions that remain most arresting. Were my family relations so mundane or serene that they haven’t left images as unforgettable as the streets, parks, markets, and schoolyards of my childhood? Most likely I have repressed or just never perceived a great deal of what occurred in my relations with my parents and younger brother.

But I do remember going to visit my grandparents often with my mother and sitting in a stroller or walking across the WPA renovated park (Crotona) which was my introduction to flowers — daisies, buttercup, dandelions, clover — and squirrels and birds — robins, sparrows, pigeons. It was this very ordinary-looking but very functional park I sometimes played punch ball and football in when I was very young, and rode a sled down a small, steep hill with my father, which then seemed the height of derring-do.

Attending yeshiva meant that I had no real neighborhood friends, but there were older boys in the area that I sometimes played ball and went to Saturday films with. But they weren’t friends, just boys who lived close by whose life I became a peripheral part of. Many of them appeared and disappeared from my life after seeing them only a few times. There was only one boy whose apartment I ever visited. I lost touch with him and the rest of these boys as soon as I went to public school. There, I made friends with classmates who I shared a world with, and my life became fuller emotionally.

What was interesting about childhood was that, for somebody who had a protective mother, as soon as I reached the age of nine I had relatively free rein to wander about the neighborhood’s streets and parks. So, though there was nothing idyllic or adventurous about my childhood, nor did it have a luminous defining moment, it did leave indelible memories.

I drifted to Crotona Park to listen to the grizzled, retired garment workers squabbling animatedly about Stalin, Truman, and the founding of Israel; went to the local movie palace on a Saturday afternoon to see John Wayne in “Red River,” or to the noisy, crumbling second-run theater — the ironically named Deluxe — to watch a triple feature, a serial, and Bugs Bunny cartoons; bought coffee cake for my parents at an aromatic, tile-floored bakery on the local shopping avenue; and walked along that teeming shopping street full of toy and candy stores, tiny pizza-slice places, a Woolworth’s, and stands overflowing with fruits and vegetables. I missed having  a community of boys, but I tried to compensate by spending time observing people.

I know I should go deeper into my interior, but at the moment, this is all I can resurrect.