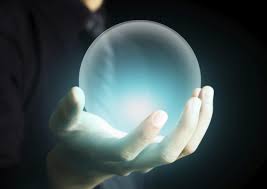 I recently dusted off my crystal ball and asked it to help me with my 2021 predictions. Here’s how it works. If I want something to happen, I predict it to give it an extra push. Then there are the things that I don’t want to see happen, so I predict them to put the whammy on them. Finally, there are the things that I really, really do think will happen so I put them down. It is up to you, dear reader, to figure out which is which. Here goes:

Donald Trump will be led out of the White House by his own Secret Service detail. This, after he lights a fire under the Proud Boys and other such miscreants in an attempt to save his tenure by instigating a civil war in our streets.

Cyrus Vance will prosecute Trump under New York State law. As a result, he will receive the undying gratitude of blue state New Yorkers and will be reelected District Attorney despite a host of others running against him in 2021. He will indict Trump and a family member in a tax avoidance scheme. Trump’s tax avoidance will be front and center for all to see. People will finally understand why Trump didn’t want his taxes released. Trump will be sent to prison.

Trump’s accusers will finally get their day in court and, as a result, more women will come forward to accuse Trump of various sex crimes.

There will be an unexpected conservative vacancy on the United States Supreme Court.

Several new names will be added to the list of those who accepted the so-called hospitality of the late Jeffrey Epstein. One will be that of a top jurist.

In a last-ditch effort to salvage a relationship with American politicians, Vladimir Putin will turn on Trump and Americans will learn why Trump has been so unwilling to say anything bad about Putin or Russia. The history books will record Trump as being the worst traitor since Benedict Arnold. Nancy Pelosi will be heard to say, “You see, all Trump roads DO lead to Putin.”

Mitch McConnell will lose his leadership post when the fortunes of the Republican Party turn out to be dire, based on what the nation finds out about Trump. The cowardly, chicken, lily-livered Republican senators will run for their lives. One major Democrat will respond with, “Too late, losers.”

New York Gov. Andrew Cuomo will stay in New York but hard feelings between the governor and President Biden will become apparent. Andrew will be sore that he wasn’t offered the Attorney General spot in the Biden cabinet. Cuomo will prepare to run for the fourth term that his father could not achieve.

Cuomo will write another book, sort of apologizing for being premature in his last book when he suggested he had beaten COVID-19 in New York. He will show uncharacteristic humility in this book.

The Georgia senatorial election will be a split decision. That will leave the Democrats one seat short in their attempt to regain the majority in the Senate. Moderate Joe Biden will be relieved because it will take the wind out of the sails of Bernie Sanders and the AOC squad.

Senator Charles Schumer will start to get appropriately angry as he denounces the Republicans and as he prepares for an all-out assault on the Trump party in the upcoming elections. One political analyst will be heard to say, “It’s about time!”

A Bronx Assembly member will be indicted and sent to prison.

There will be not one but two divorces in the Trump family. One unhappy former bride will say, “I didn’t sign up for this!”

You, dear reader, will have a happy and much healthier New Year!