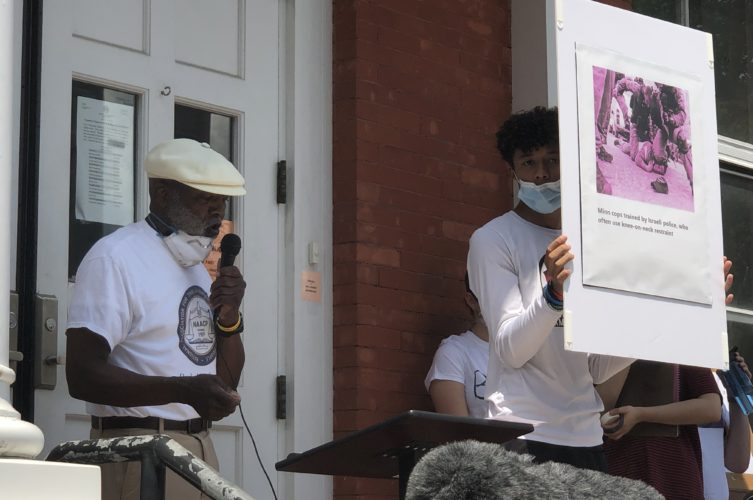 Oh no! I can’t believe that he said it.

Dennis Powell, the very decent chairman of the Berkshire County NAACP, got up before a crowd of a thousand people last Saturday and gave a speech that was generally excellent but contained what some thought was an anti-Semitic remark. People immediately began write to me and one lady said that she was really “pissed.” The crux of people’s complaints was that this rally was meant to bring people together and until Powell made his remarks, it looked as if that was what was happening. A thousand people with posters, signs and drums had gathered to proclaim that “Black Lives Matter” and that there would be no peace without justice. The word of the day was “Enough!”

In my conversation with Powell, he told me that a “Jewish member” of his local NAACP board had given him an article from Amnesty International suggesting that Israel was training U.S. police officers in the use of choke holds and knees on throats. To put it mildly, this plays right into the hands of Donald Trump who has now proclaimed himself the law and order president.

Let’s face it — the Black community and the Jewish community have always been marginalized and it has historically been the policy of those who have everything to gain to pit these two groups against one another. On the other hand, Jewish and Black groups have been traditional allies for years.

Powell, of course, has done a great deal in our area for which he should be very proud. His work on the Clinton AME Zion Church restoration along with Wray Gunn could well have been mentioned in his speech. Likewise, he might have mentioned all of those Great Barrington and Southern Berkshire institutions that have worked so hard to make this area one of inclusion.

I started by stating my wish that Powell had not made his remarks. I would rather not be writing this column. He has said that he wanted people to know about this. I said that he could have done an op-ed in one of our papers, but this was neither the time nor place. This is a time when anti-Semites as well as racists will emerge. But in the end, one has to do what’s right because as history teaches us, shutting up in the face of anti-Black or anti-Semitic remarks is always a big mistake.