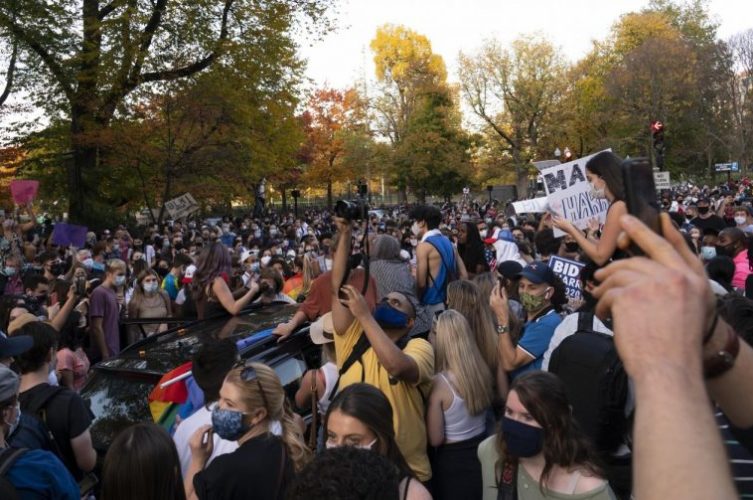 Crowds celebrate the defeat of President Donald Trump in the November election.

I have been alive for a while now, so long that I remember, as a 4-year-old, hearing loud noises outside my home on 96th Street on Manhattan’s West Side. When I asked my mother what the noise was all about, she said that there was this bad man named Hitler who had started and lost a war. That celebration has stuck in my mind to this day.

I don’t really remember the jubilation at the end of World War II, though I’ve seen a lot of pictures of people partying in the streets. It had been an excruciating time causing great amounts of pain and death with many, many families experiencing terror and loss.

That’s why the defeat of Donald Trump means so much to me. In my entire lifetime, I have never seen the joy that I saw on the day that the sitting president of the United States was defeated.

All over the country, people poured into the streets. The very Lafayette Square, which had been the site of young, peaceful demonstrators being assaulted by pepper spray and rubber bullets, was now a place of joy. The president could no more have stopped the jubilation celebrating Joe Biden’s victory than he could have held back the seas.

The joy was contagious, but it was much more than joy — it was a sense that, somehow, we had been delivered from the clutches of a would-be dictator who thought he understood the pulse of the people.

The man really played to the evil side of this country’s voters and he absolutely believed that he would prevail doing that. Indeed, he brought out an incredible 70 million voters who voted for his side. I guess he figured that if he energized his base, they would come out. The others would play “Go Fish” and stay home. Well, he had it half right. He energized his base all right, but in doing so, he energized the other side as well.

Joe Biden received more votes than anyone in history. He got a million more votes than Hillary Clinton, who got 3 million more votes than Trump. It was extraordinary. Biden even won Georgia of the old confederacy! But we know all that. It was what happened after the election that still has me amazed. I think those kids in the streets sealed Trump’s defeat. He said all along that he would not accept anything less than victory and if he didn’t win, he would not abide by the results. He had reason to think that. It’s tough for a president to be denied a second term. It happens, but not often.

I don’t know about anyone else, but I really wasn’t in touch with how oppressed I felt. When Trump lost, I shed tears of joy and relief. It was as if a giant weight had been lifted from my back. Maybe an appropriate analogy would be being told that you had a serious disease and that death was near, only to be subsequently told that there had been a mistake and you would live.

It turned out to be a relief that many of us didn’t understand or expect. People were stopping me in the streets and congratulating me as if I had been responsible for the electoral outcome. In Great Barrington, my wife, Roselle, stood on the corner in front of Town Hall with a big sign and virtually every car that came by honked their horns repeatedly. Roselle and I had discussed what country we could move to if Trump were to win. Thank God he didn’t. We can stay where we love to be, right here in Great Barrington, Massachusetts.

When the chips were down, the people voted. They sure had a choice and they came out. I’m still a little wet around the eyes and a lot relieved.