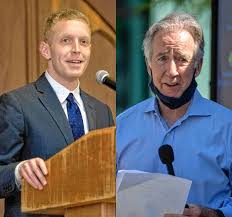 In a few days, we’ll have a primary in Massachusetts. Whenever someone does their job really well, they are to be congratulated, and that is exactly what U.S. Rep. Richie Neal deserves. Our only countywide printed newspaper has endorsed Richard “Richie” Neal for Congress in the primaries and I agree with its choice.

To me, Richie Neal is a superb congressman. I have interviewed him again and again on WAMC’s “Congressional Corner” (I also regularly interviewed his opponent, Holyoke Mayor Alex Morse, during this campaign). I find Richie to be incredibly progressive. In fact, he is a TRUE progressive. His sponsorship of the major COVID-19 bills, along with the support of Nancy Pelosi, is the single reason why so many Americans had food on their tables for an extended period of time. Of course, he had to get through the disgraceful Republican Senate by making compromises. The point is, he gets the credit for making it happen. As chairman of the powerful Ways and Means Committee, it was primarily his responsibility to write both pieces of legislation passed by the House, one of which is still waiting for Mitch McConnell and his heartless Republicans.

Richie Neal is my idea of what a member of Congress should be. He is a natural teacher. He is brilliant. He played a huge role in ending the Troubles in Ireland. He was a superb mayor of Springfield. He knows what our towns and cities need, and he has fought to make sure that all of us in the Berkshires share in the programs that he has sponsored.

Neal has enjoyed a lot of people giving him money for his campaign, as has his opponent. In fact, Richie Neal is very much in favor of fair campaign reform and I suspect he always will be.

No one has been more out front than Richie Neal in going after Trump’s tax returns. Frankly, Richie and his House counsels know exactly what they are doing in this case. When Richie’s lawsuit reached the Supreme Court, they voted 7-2 with Richie, affirming that Trump was not above the law, but they then disingenuously sent the case back to the lower courts where they knew it would not see the light of day until after the election. In other words, they underlined Richie’s appropriate concern about the legitimacy of the process.

I can personally attest that Richie shows up all the time. For those who suggest that he is not progressive enough, let me tell you that his support of one of our greatest progressives, Sen. Elizabeth Warren, has never been in question. He was with her until the very end. In fact, it was Richie who introduced me to Elizabeth Warren.

The thing that I admire most about him is his ability as a teacher. When I am with Richie, I always learn something. No matter how high his prestige is as a top House leader, he shows up in class and I always think about how lucky his students are to have him. As for me, I love the guy.

Anyone has a right to primary anyone, but fair is fair. Unfounded accusations are troublesome. Richie Neal’s character is unquestionably level and fair. There should be no question about reelecting him.

On another subject, we have the case of the chickens. I have always observed the well-known category of “That’s how they get you.” My wonderful neighbors had a rooster who evidently bothered the family of a powerful selectwoman next door. Someone complained to the head Rooster Inspector, who came to our neighbors’ house and told them to lose the rooster. That’s what they did, but it’s a crying shame. Things are just not the same in the neighborhood. As Pete Seeger used to sing, “I love my rooster and my rooster loves me.” Sorry about that, I just had to do it. Anyway, there was a petition to the town to revise the rooster law. We had just a few short days to gather the necessary signatures, but the authorities tell us we fell five signatures short of the required number. I think the town laid an egg. Yes, I know roosters don’t lay eggs.