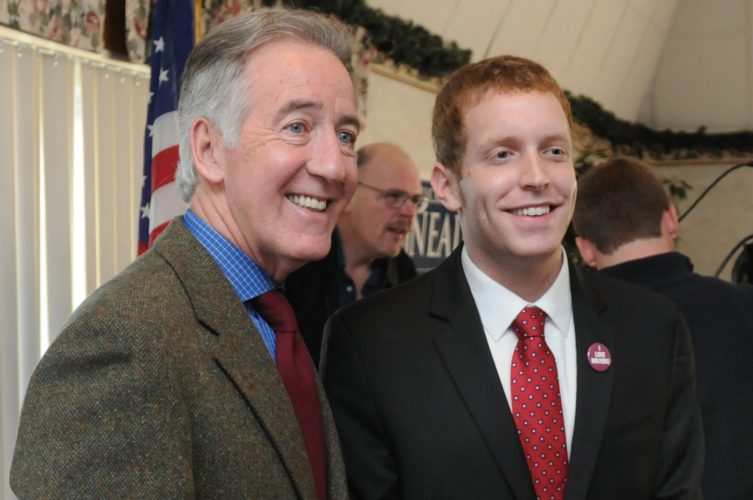 January 7, 2012 - Holyoke - Staff photo by Michael S. Gordon - Congressman Richard E. Neal, D-Mass, left, and Holyoke Mayor Alex B. Morse Saturday at the Holyoke Elks Lodge. Neal began his outreach in Holyoke to constituents of the reformed congressional district and voters he hopes to represent after the November election.

Alex Morse is the mayor of Holyoke, Massachusetts. He is now running in a primary against a personal hero of mine, Rep. Richard (Richie) Neal, the former mayor of Springfield, a much bigger and more difficult city to run than Holyoke. Due to his success there, Richie Neal was elected to Congress, where he has risen to the chairmanship of the powerful Ways and Means Committee. He has been responsible for some of the most crucial legislation in America, including the CARES Act and the HEROES Act (now in negotiation with the Republicans), that have helped so many Americans, including those in the 1st District.

If there was ever a time to keep Richie Neal where he is, this is it. Richie recently met with a group of grateful entrepreneurs in Holyoke, Morse’s hometown. Under the Paycheck Protection Program, there were 10,460 loans made, totaling an incredible $1,177,312,235 in the 1st District! Morse is quoted as questioning the program, calling it a Band-Aid for a potentially fatal wound. Are you kidding? Tell that to all those people who literally would not have been able to put food on the table without that help.

I had a little taste of the Morse campaign nastiness the other day when I was approached by a supporter who wanted to know when I was going to have Morse on the radio. Frankly, I was stunned. I told her that Morse had been on in the past and was scheduled to be on again. In other words, don’t let facts get in the way of a spurious accusation. I told her that it was important that she get it right but that it was certainly her right to support anyone she wanted to.

The very ambitious Morse is going for broke, making all kinds of accusations against Neal. As the old saying goes, people in glass houses shouldn’t throw stones. Some very disturbing things about Morse and his campaign ought to face the light of day. I will never use this space to critique other news media, but sometimes local media likes to make a horse race out of something that doesn’t merit that treatment. For example, practically ignored by some press is Richie’s pride in drafting and sponsoring the PPP program mentioned above, that has helped so many of the people in the 1st Congressional District. One wonders what could be on Morse’s mind, running against a guy who is not only a truly kind and remarkable man but is so senior in the Congress that we will certainly never have a chance to see his equal in the future. Indeed, what could the few who support Morse be thinking?

As the mayor, Morse is a top member of his school committee. Right now, there is nothing more important than the future if our children. Perhaps as mayor of a relatively small city, Morse had something more important to do than attend meetings of this incredibly important group. He admits that he missed some meetings, but his critics say that he missed more than “some.” Maybe visions of power were dancing in his head as he eschewed this basic responsibility of office. If elected, perhaps he’ll be placed on an education committee in the House. Hopefully, he won’t find it too boring to show up.

There are substantial problems with the way Morse dealt with his own police department at a time when police misbehavior is under review across the country. He was apparently absent without leave. He denies that and says that he has, in fact, reformed his police department. Sure, he wants to be congressman. I can’t blame him for that, but this is not the time to turn our backs on Richie Neal, who has done so much for us all.