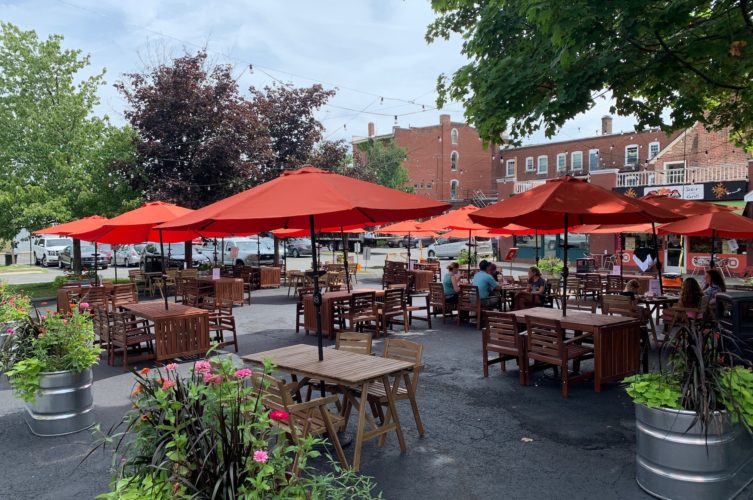 Richard Stanley has an idea. He wants to make Great Barrington the outside-dining capital of the Berkshires. He knows that people want to be respectful of the rules. They want to social distance. They want to wear masks and they certainly don’t want to get sick. Stanley, you will remember, is a consummate businessman. He is a real estate investor. He and a late partner built the Triplex Cinema, which was the go-to movie theater in the southern Berkshires. He is involved in a myriad of causes that help people. He is a pilot of some note and he is very generous.

He has already put his idea in motion. He took the parking lot between the theater and the Barrington House building he owns and converted it into a space for outside dining. It started with several restaurants in the Barrington House building. Of course, Great Barrington is parking-space starved and some folks will not be happy with the disappearance of their valued parking spaces. But while some merchants may be angry with him, others will love the idea because when people come into town to eat at the open-air restaurants, they may well take the opportunity to shop at many of the town’s establishments.

When I mentioned to him that winter is not that far off, he suggested that until it gets here, he could make use of the powerful heaters that some of the New York City-type restaurants use to warm their customers. As soon as he started al fresco dining, the available, safely spaced tables were all filled up, demonstrating that people are ready to safely socialize.

As for the parking conundrum, people in the surrounding neighborhoods will have to walk into town or park on the outskirts. As a friend of my twin brother once told him, you have to give a little to get a little.

People want to get back into the game. Roselle and I love dining out. On the other hand, I have always believed that this virus is an opportunist and the very act of walking out of your house to town or to a movie or a concert or a play presents an opportunity for the virus to do its deadly work. Obviously, the older you are, the more at risk you are, so those of us in that group have to think long and hard before leaving the safety of home. Nevertheless, Richard Stanley reports to me that from the very first moment, his new outdoor area was full of people proving, once again, that we are social animals. Every time you go to a supermarket with your mask on, you are also giving the virus an opportunity to get you, and there is such a thing as going too far… or is there?

We have only to look at the number of second-home owners who have decided to wait out the pandemic here in the Berkshires. Think of living in a 15-story building with four apartments or more on every floor, where each person presses the elevator buttons a few times a day. We know that presents a danger even with the most precautionary actions. Then there is the matter of walking in the streets near those who choose not to wear a mask.

If it were you, wouldn’t you take up residence in your Berkshire home rather than take the risks outlined above? Of course you would. So every time you hear someone complain about the “New Yorkers,” think about the contribution that these folks are making to our area. Many of them have the very money that will keep our economy going.

The point of all of this is that we have a mixed economy and we have to make compromises.

Richard Stanley has a good idea for outside dining, but only if we do it right.