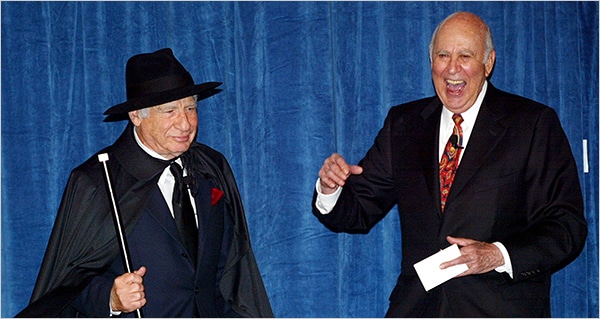 The great Carl Reiner has passed. The many films, television work and recordings he made with his best friend, the extraordinary Mel Brooks, stand as an eternal reminder of his incredible genius.

All of Reiner’s work has been spoken of again and again in obituaries and remembrances and usually taking second, third or fourth place is what many of us consider his greatest work: “The 2000 Year Old Man.”

In it, Reiner interviews Brooks, who plays the part of the very old man. I have quoted liberally from “The 2000 Year Old Man” for years. Many of my friends and I have committed a good deal of his work to memory and it has become a shorthand for almost every political situation.

However, one of my favorite lines of the Brooks/Reiner opus involves another fictitious character played by Brooks and questioned by the Reiner, the most brilliant straight man around. This one takes place in a psychiatrist’s office. The so-called psychiatrist, we learn, is not a real doctor but a “Docca” — Docca Haldanish — who cured a client who just tore paper all day long. An astonished Reiner asked how he did it and the faux shrink answered, “I said, ‘Don’t tear paper.’” As the 2000 Year Old Man once said, “Simple but eloquent.”

For years, I have been using this column to answer questions to the doctor. Of course, I am the doctor since I have a Ph.D. in political science. However, in honor of Reiner, I will write this column as a “Dear Docca” work.

Dear Docca: A Great Barrington selectperson, Kate Burke, recently suggested that the time has come to re-evaluate the way in which the town’s police department operates. Among other suggestions is a citizens’ police advisory board and such common-sense things as the use of body cameras and the end of our civil service selection of police hires. We should be sure to hire the right people, not simply those who test well. Is this a good idea? Sign me, Anonymous and scared of the police.

Dear Anonymous: These are indeed good ideas. Take it from the old Docca: No one wants to mess with the police. I have written about this again and again. Good for Burke, whose participation in town government has left something to be desired when it comes to acting independently from the other selectpersons. Now let’s see whether the others have the guts to follow her advice, especially now that the police chief is retiring. With police reform on everyone’s lips, this is the ideal time to get it done. Right now, the police are behaving, but trust me, it wasn’t always that way. If you abolish civil service, you risk putting more power in the hands of the town fathers and mothers and that, too, can be abused.

Dear Docca: What makes you think you’re so smart? I am very worried about gaining weight. Now that we’re in the middle of a pandemic, I’m at home and way too close to the refrigerator. I can’t stop eating. If you are so smart, tell me how to do it. Signed, Bertha from Barrington.

Dear Bertha: This is a tough one. Me too! Just ask yourself, “Am I really hungry or is this just nervous eating?” Also, you might try putting up a huge sign on the refrigerator that simply says “NO!” Finally, set sensible rules like not eating anything after 4 o’clock and not eating again until 8 the next morning. Look up Dr. Fung on your computer. Good luck!