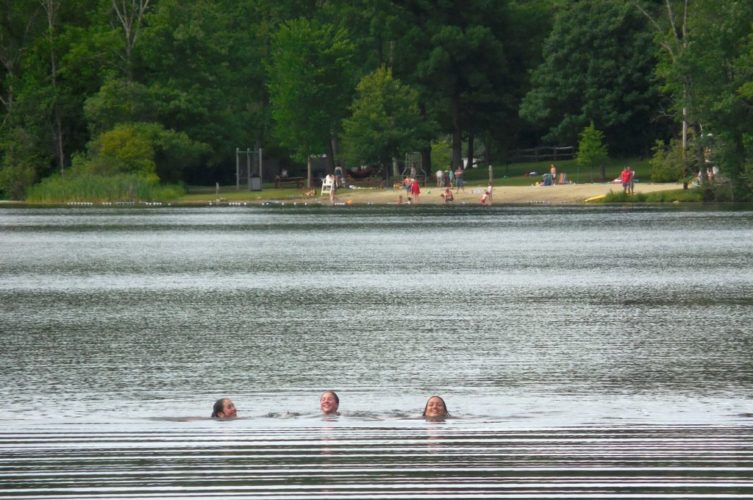 The ticks are out there. Do you remember back when Lyme disease was on everyone’s lips? Now with COVID-19 we’ve got more important things to worry about. I saw some kids in shorts going into the woods across from Lake Mansfield with their dog. Lyme disease is very dangerous and can cause lifelong, debilitating problems that are easily preventable by wearing cover-up clothing and using various anti-tick sprays. Don’t say I didn’t warn you.

On another important topic: You will remember my paean to a wonderful goose a few weeks back. He had taken up residence on the beach next to the lake. I love that goose, who is exemplary in his dignity and bearing. I was concerned that he had no mate, but he does now. For the last several weeks, I have seen him with a lady goose and they are inseparable. One day not that long ago, they were joined by a huge flock of other geese on the beach. I was sure that our two wonderful resident geese would take off with their companions and disappear in one of those formations that we see all the time, but no: They are still with us.

Our neighbors, Jon and Kathleen, are going natural. I suspect they are making a statement about our obsession with lawns. They have rolled up some of their turf and are planting special natural grasses. That way there will be less to mow. Said Kathleen: “It’s called naturalization. We welcome back pollinators and cut back on pollution.” That means less noise and pollution from the lawn mowers. Several years ago, I walked into a hardware store that was selling those old-style push mowers and, for a hundred bucks, I bought one. Unfortunately, my own physical ability turned out to be somewhat limited and there it sits in our garage. I should give it away but hope, as it is said, springs eternal.

There is a fight brewing in Stockbridge and other towns about traffic circles. Sometimes when there is a particularly dangerous intersection with lots of accidents and near accidents, the authorities, usually at great expense, will decide to put in one of those complicated rotaries with traffic entering from many different directions. The intersection in Stockbridge, right opposite the Red Lion Inn, is one such place. You really do take your life in your hands when you are either crossing Route 7 to take the shortcut to Tanglewood or make a right or left turn onto Route 7. Once you get through that hellacious spot, you thank whatever religious figure you report to that you have lived through yet another life-threatening experience.

Those rotaries come with their own dangers. I just don’t like them. What’s wrong with doing it the old-fashioned way, with a traffic cop standing there directing traffic? There really is nothing Ike a human being saying stop and go. Great Barrington has a massive police force and some want a rotary where routes 23 and 7 meet at the southern end of town. I admit that the Stockbridge situation is a lot hairier than Great Barrington, which features a first-class traffic light. There are a lot of ways to spend our local or state tax dollars and with everything we are going through, this just ain’t the time to spend money on things we don’t really need.

Finally, let’s discuss a spate of driving-while-drunk stories. When someone has been arrested multiple times and continues to risk lives by ignoring sanctions like license suspensions, one can only wonder what should be done with them. I believe that we have an overcrowded prison system and I can only applaud attempts to reverse that situation. On the other hand, if ankle bracelets and driver alcohol-sensing devices in cars can’t stop a potential murderer from getting behind the wheel, it seems to me that long-term incarceration is called for.

Oh, and one more thing! We fly the American flag on Memorial Day to honor all those who have sacrificed themselves to keep democracy alive. Somehow the right-wingers think that they own our flag. Wrong! Fly the flag.