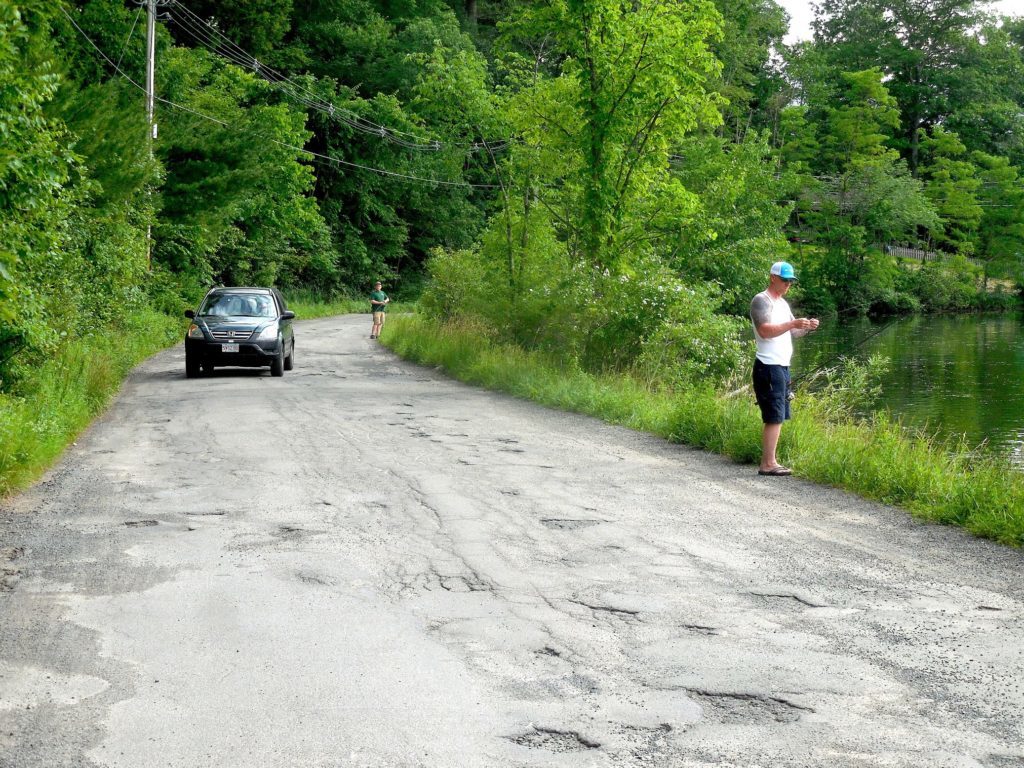 Lake Mansfield Road, a favorite route for those on foot (and bankside fishermen).

First of all, people are walking. People nod. They smile. They chat from an appropriate distance. I hardly use my car. We used to eat breakfast out a lot. Now there’s nowhere to go.

That leads to the second phenomenon: People are cooking at home. That’s fine, but you have to get the food. A new industry of personal shoppers has sprung up. Some older folks risk a daring dash to the supermarket maybe once a week. With their masks and gloves on, they wait in the cashier’s line or even the self-checkout line while people push carts with massive amounts of food and cleaning supplies. Whole new procedures have developed. When you are standing on line, you had better keep 6 feet away from the next guy. I got bawled out at the Big Y the other day because I didn’t realize that the aisles were now one-way so that people would not bump into each other while approaching from different directions.

I don’t know about you, but being at home means that I am constantly looking in the refrigerator (née “ice box”) as if something new might appear to entertain me. Naturally, one of the great risks of self-quarantine is to pass time by eating too much, especially eating the wrong things. A lot of people are diabetic and when you eat the wrong things, you are entering into very dangerous territory. It really isn’t fair to tell your significant other not to get things that will entice you to eat the wrong stuff. It isn’t his or her fault that you have diabetes or are overweight.

People can get antsy and often angry when they are locked inside. They pick silly fights. Take the folks who live on our hill who decided that people with power leaf blowers should just, well, stop using them. That led to a huge debate among neighbors about the propriety of using machines. By the way, lawn mowers can make a lot of noise, too. Perhaps that’s the next debate. We’ve had several power failures lately and now there is the question of generators. In some cases, these VERY loud devices will automatically turn on. The other day, ours did at 3:30 a.m. They can prove to be lifesavers, particularly since so many people are now doing dialysis at home and a power failure could spell a death sentence. For those who want to pick fights with their neighbors about leaf blowers, I say, “Cool it.” Play Scrabble or do some deep breathing. Don’t start yelling about the train whistle being too loud.

Then there is the matter of too much television, which can leave you with addled brain syndrome. I mean, one can only watch “Gunsmoke” so many times. I heed a limit of three times per episode. You also discover things like Spectrum’s giving in to all the Massachusetts folks who wanted local news. So they switched it. Incredibly, instead of Andrew Cuomo, we are now getting inane local stories for Worcester, Massachusetts. What in hell does Worcester have to do with us? If it’s Gov. Baker, fine, but a local story from Worcester doesn’t cut it. That drives me off the wall. They must be getting complaints because every once in a while, they’ll throw in a Berkshires story.

You’ve gotta hand it to the firefighters and the police. Can you just imagine walking into the scene of a domestic dispute and literally having to lay hands on a dangerous person? What about someone with a seriously disturbed daughter or son who is acting out in such a way that physical intervention is demanded?

I don’t know about you, but I really miss the movies at the Triplex. It will be a long time until you find me in a movie theater. Our behavior may be changed forever.