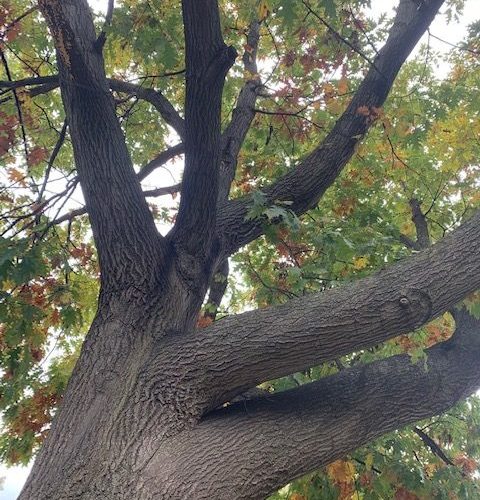 So I have this wonderful neighbor who recently bought the house across the street. She is extremely conscientious and has worked very hard to improve her property. From the moment she arrived a little while back, she said that she would take down the very large tree on her land. The thing was huge and the tree man that we employ made it quite clear that the tree was dangerous, as in the term “widow-maker.”

The folks in the Berkshires are very aware that in a split second, a branch can fall and take a life. Indeed, a woman was tragically killed years ago in just such an event after her husband went into the house to collect something that he had forgotten. When he returned, she had already passed.

The point here is that there are a lot of very dangerous trees in our area. Roselle and I walk Murray the dog several times a day, she more than me. Every time I walked under that tree, I remembered just how dangerous it was. When our wonderful new neighbor moved in, I told her about the tree and advised her to watch out when she walked under it. Of course, it turns out that the tree was the least of the problems with her new house, but that is for another time. She takes her responsibilities as a homeowner very seriously. So, despite the enormous cost — several thousand dollars — to take the behemoth tree down, she did it. I am relieved because even though I will eventually die, as will my darling Roselle and Murray the dog, it probably won’t be from a falling tree limb.

Now, right down the road are two enormous trees that look pretty dangerous to me. Don’t get me wrong: I love their enormous branches and leaves and the resulting shade. But one would think that our great metropolitan town of Great Barrington (population: 7,000) has some responsibility to come around, especially when the great trees are technically on town property. We contacted a town selectwoman, who made it clear that she liked the two trees on our corner. Yes, but the idea is that the town to which we pay big taxes (I have no problem with that) ought to assess potentially dangerous situations. After all, it is the business of government to protect its citizens. Put another way, you don’t have to take down the trees, but you do have to make sure that they don’t kill anyone.

Too often, people who should know better argue in a fallacious “either-or” manner. In other words, either leave the dangerous tree up or take it down. Nope, it comes down to the fact that it is the town’s responsibility to trim the tree. Every once in a while, we get a note on our door from the folks at a utility company, who have determined that they need to take down some of the tree branches on our property, which is technically owned by the town because of the right of way. They don’t have to do that, but it keeps tempers cool and is absolutely the right approach.

Our neighborhood is known for its trees. That’s great. Once a giant tree on our property fell on an outbuilding and crushed the roof. I remember it because we were on our way to Portugal and had to call off our trip. The insurance company paid with no complaint but the next time we filed a claim after years of no claims, they cancelled our insurance, suggesting that their reason was that we had filed two claims in one year. Can you believe that? So it is probably a good idea to stay ahead of trouble by inspecting your trees, just like our wonderful neighbor did.