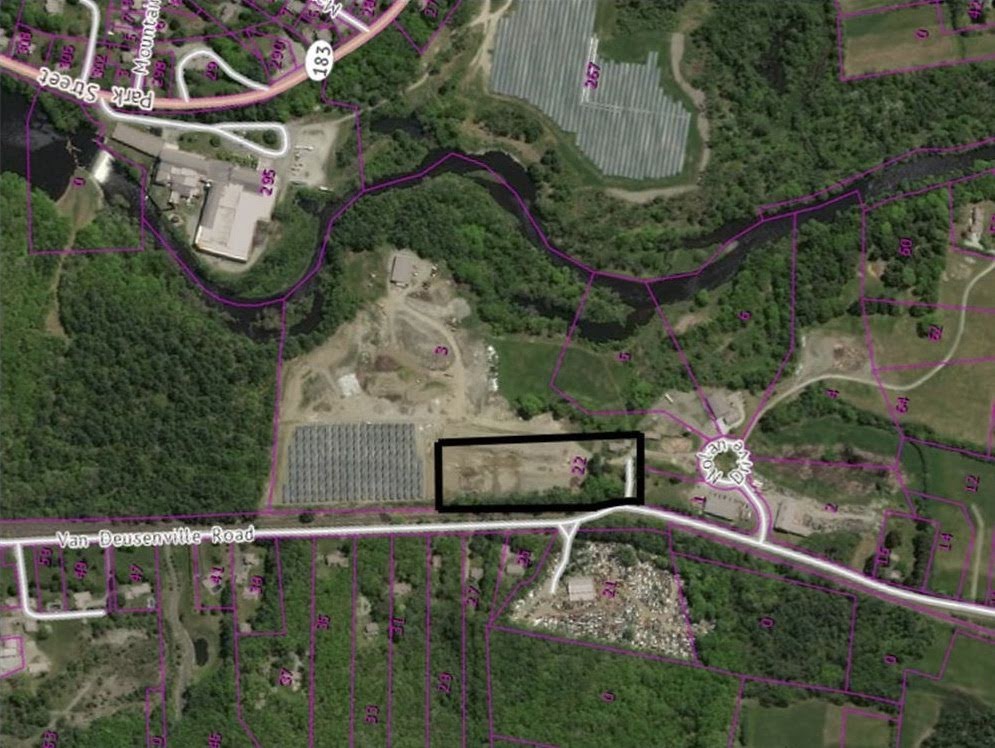 An aerial view of the proposed cannabis production facility on Van Deusenville Road. The site is boxed in black. Lot lines are in purple. Image courtesy Fulcrum Enterprises LLC

I always remember to thank Gov. Andrew Cuomo for filling the Great Barrington, Massachusetts, coffers because of New York’s intransigence in legalizing recreational marijuana. Great Barrington has licensed five dispensaries and the one that is already open has long, long lines. The last I heard, there’s an extra $1 million already in the town coffers. As far as I can tell, the town of 7,000 full-time residents has not yet gone to hell.

Now Great Barrington has a new and more serious problem. Some entrepreneurial types want to grow lots of cannabis plants in the fields of Housatonic. For some very good reasons, the neighbors on Van Deusenville Road, many of whom have children, are not happy. They say that cannabis plants stink. They also say that the operation can lower the property values of their homes.

The fact is that the people of Massachusetts, and specifically of Great Barrington, voted in statewide referendum to allow this operation. We don’t necessarily learn about the downsides until the moment of truth is upon us. Now people are properly angry. Those who are most affected and some others have raised their voices and protested in every way possible. I have received my share of phone calls, basically lobbying me to check in on all of this.

This is a great political science study because the locus of decision-making comes down, depending on who you are listening to, to competing town boards. There is the planning board, which, I suspect, has always been interested in things like property rights and variances and such. These folks are likely to say “yes” to the pot growers. Then there is the town board of health that is most likely, for good reason, to listen to the concerns of those opposed to the new idea. Most of us are more likely to listen to the health experts than the planning and real estate people. The health people are being very careful, especially considering the potential for law suits from the pot farmers, who are likely to make millions from their new enterprise. So the health board and the selectboard are asking for “more information.” I get that; I probably would, too, if I were sitting in their seats.

Great Barrington has to decide when enough is enough. It is looking like this whole place is becoming an open town. I can live with what the town has already done but I worry about how greedy we are becoming.

The town’s selectboard now says it wants “an investigation.” Will it listen to the very angry people who want to protect their families and property rights, or will it want to put an “open for business” sign on Town Hall? After all, the voters have given the town the right to do what it wants. If I were a selectperson and I wanted to stay in office, I think I’d say we have reached the limit. Of course, there are other towns that might want the revenues, but the way it usually works is that voters in the outlying places pay very little in taxes compared to Great Barrington, so they may not be as money-conscious (“grubbing”) as the Great Barrington voters. After all, Great Barrington has always provided services for the outliers.

There is no evidence that the pot being dished out by the providers at “Theory” has negatively affected the town. I am sure it won’t be long before the scientists come up with a convenient and immediate way of figuring out whether suspected errant drivers are over the limit pot-wise. I can’t believe that any selectperson will ever get a Housatonic vote again if they vote for this. People are really angry; we saw that at a recent open meeting.

Once again, it comes down to the need to raise tax money versus the need to do what is right.