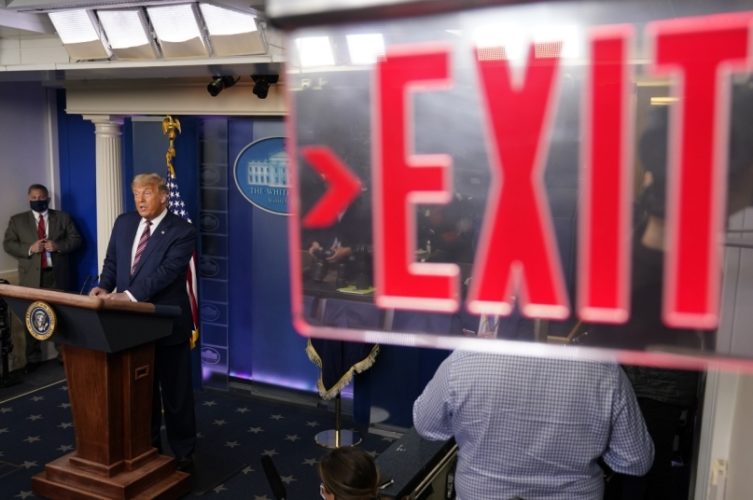 One can only see this election as Donald Trump running against himself.

He continued the thread that came out of the American Civil War. Slavery may have been abolished by the 13th Amendment, but all those who study the American sociology know that slavery was followed by Jim Crow and all those tricks that kept people of color in their places.

We all know that, as Pete Seeger used to sing, “If you’re black, get back.” And so it has gone. With the election of Barack Obama, it was assumed we had finally restored racial sanity to this country. But things got sloppy. By the smallest of margins and with the help of the devil’s deal known as the Electoral College, Hillary Clinton lost the election despite the fact that she got the most votes.

So one of the greatest hucksters of all times, Donald Trump, became president. He did not head toward the middle, as any sane politician would have done. Instead, he continued his racist dog whistles on the obvious theory that he’d excited the base of Americans who were still fighting the Civil War. As long as he relied on American racism, he would win a second term.

If the Democrats sat on their behinds and failed to show up at the polls in 2020, Trump would win again. Abraham Lincoln’s legacy would finally be reversed. In 2016 white men voted for Trump to preserve their status, their majority and their power. Racism is alive and well in America. They were assisted by the nonvoters, who were convinced that they would never get an even break no matter which party won. Donald Trump was sure that what had worked in 2016 would work again in 2020.

We know that from his own words. He lied through his teeth. Over and over again, he said that he was the best thing that had ever happened to Blacks in America. His niece and his sister both knew him for what he was and said so. His language, his statement that he would grab women by their genitals didn’t seem, at the time, to make a difference. About 40 percent of America stood with him. If those people could be motivated to turn out in key states, he would win again. I am quite sure that his delusional brain believed all of that.

It was clear from his utterances that he would, if reelected, lead this country into a totalitarian society. If 40 percent of the country showed up in force, he would win again. Some of the folks who supported him, including many of the unions that had been historically racist, would stay with him. If all those white men doubled down on their privilege and if people who had been screwed in this society gave up, he would prevail.

If his friends like the dictators Putin and Duterte could do it, so could he. That’s why this election was crucial. This constitutional democracy would fall as so many other fledgling democracies had fallen. We know that he spoke of wanting a third term, forbidden by the Constitution. As Freud was reported to have said, “There is no joke.” Donald Trump means what he says.

The handwriting was on the wall. Trump announced that he was calling off his election night celebration. His not-so-subtle attempts to bring thuggery to the polls were well-known. The Civil War tore this country apart. Trump tried to do the same thing. Joe Biden is a decent man but in the end, this election was all about Trump and his dangerous foolery. In my opinion, he was and is the worst and most dangerous demagogue that this country has ever had to deal with. Thank God so many people understood that.