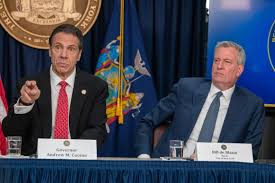 As I remember, “Sergeant Preston of the Yukon” used to talk about his “jurisdiction.” Who would have thunk that the concept of jurisdiction would make a major comeback in the days of the COVID-19 pandemic and yet another scourge known as Donald Trump? We have a president, who is insisting that his powers are paramount to that of governors, mayors, state legislatures and both houses of Congress. In “Gunsmoke,” Matt Dillon was a U.S. marshal and that made him more important than the lesser sheriffs and law enforcement folks in his jurisdiction. Ditto the legend of Wyatt Earp, who was both a local law enforcement guy and a U.S. marshal. Of course, that is all fiction.

Today, we are seeing jurisdictional fights all around us. Just take New York, for example. Unless you have difficulty with hearing and seeing, you are well aware of the bad blood between Democratic Gov. Andrew Cuomo and his adversary, the Democratic mayor of New York, Bill de Blasio. We all know that the two guys don’t like each other very much. Cuomo is riding the waves (as we used to say on Fire Island) with a polling rating above 65 percent while poor de Blasio is down in the basement. I’m not sure what the origins of that fight are all about. Part of it may be that at one point, both men had their eyes on the White House. Both will deny it until the moment one or the other of them decides to run. In the competition between Cuomo and de Blasio, Cuomo has certainly prevailed.

De Blasio sees himself as a populist while Cuomo, no matter what he says, has self-identified as a common-sense moderate in the style of his father and his very good pal, Joe Biden. Cuomo tells us that he is a progressive and offers a litany of accomplishments that he says prove his case. For his part, the mayor keeps falling lower and lower in people’s estimation as reflected by the polls.

In several instances when de Blasio has attempted to put his mark on the coronavirus situation, he came up against an apparently annoyed governor who made it clear that the governor’s position is set in New York law. For all of you who studied political science in high school or college, you are familiar with the red-letter law that “the city is a creature of the state.” When the governor wants to delegate certain powers to localities, he does so, but for the most part, he holds onto the reins. In the end, de Blasio may establish a quarantine or announce that the schools will open, but if the governor is against it, Andrew will ultimately prevail.

Unfortunately, during times like these, the people don’t want to see their leaders behaving like schoolchildren. It may well be — and I think it is — that Cuomo is well within his rights to set standards for the cities and the communities of the state. That avoids potential chaos. Problems will occur when and if the governor is wrong, as we recently saw in Georgia when the governor of the Peach Tree State determined that mayors who were mandating the wearing of masks were acting without his authority. We know that power can be corruptive. The single thing that I have admired the most about Cuomo was his insistence that we do something about the gun scourge that we face in New York and the rest of the country. That took guts and some of the political Neanderthals will never forget what he did right after all those beautiful children were murdered in neighboring Connecticut.

It should be said that lately both Cuomo and de Blasio have been playing nice. To do otherwise when it is not necessary is just plain stupid.