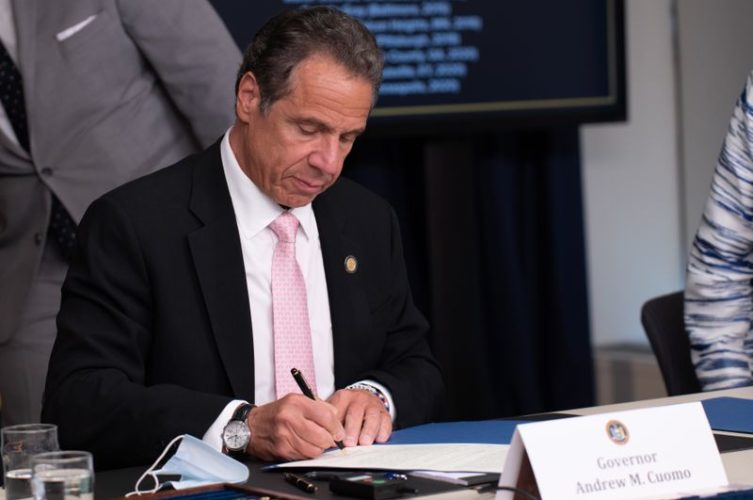 So Andrew Cuomo and the leaders of the state legislature have gotten together and passed what looks like comprehensive police reform.

Make no mistake about it — this would not have happened if the Republicans were still in control of the New York State Senate, although, with the way things are right now, even the Republicans might have had to do something. In this game of musical chairs, the Republicans had theirs pulled out from underneath them.

Up until now, they were not about to tick off the powerful police unions who have brought a lot of politicians to their knees including, spectacularly, Mayor Bill de Blasio. There is even a minor rebellion going on in the United States Senate. Those poor GOP schnooks have been following the Trump playbook, knowing that rank-and-file Republicans are all in for Trump. On the other hand, they also know that they have to keep their majority and if they lose their own elections in protecting Trump, they are personally and professionally done for — no more congressional gym, no more people bowing and scraping. Of course, politicians, cynical lot that they are, know that things come in waves. The police union-types have long, long memories and will be unforgiving in the future.

Let’s examine some of the changes. The big one is the repeal of Law 50-A. That’s the stinker stipulating that all police files are protected from public inspection. That includes the press, which Trump calls “the enemy of the people.” Okay, I get that it is inconvenient for the people to know whether an officer busted in a drunk driving incident had previous offenses. While I am alcohol-adverse and never drink, you had better believe that if I were caught and it turned out that I had several such offenses, it would be a newspaper story, right?

Most cops are decent people, but we all know a cop who is a bully and may have been attracted to the profession because it offers them the kind of power they seek. Those people should be psychologically tested before they are hired. But in the meantime, at the very least, let’s see whether they have a record of abuse.

Then there is the new law that prohibits phony race-based calls like the white woman in Central Park who called the police to complain that she was being “threatened” by an African American man. He had simply asked her to comply with the park rules and leash her dog. She became world-famous for her racist action. That mistake won’t go away, even though she immediately apologized. As they used to say in school, it went on her permanent record.

The next Cuomo move ensures that the state attorney general automatically becomes the special prosecutor in the case of an officer-involved shooting of an armed person. We all know that DAs have to work with the police, and this move makes sense to avoid inevitable conflict-of-interest charges.

Cuomo also signed executive order insisting that every locality come up with a plan to reform its police system or risk losing state aid.

Finally, there was a big move to prohibit chokeholds in New York state. All of these changes are long overdue.

As for the call by some advocates to “defund” the police: Despite the fact that the word “defunding” speaks for itself, many of the advocates behind it are nonsensically saying that the word doesn’t mean what we all know it means. Joe Biden, Andrew Cuomo and so many other leaders are opposed to that idea and so am I. Reform them, yes. Change recruitment practices, yes. Give on the job comprehensive training, yes. Weed out the bad cops, yes.

The last thing we want to do is to throw out the baby with the dirty water. We will need police to rein in crime and domestic disturbances. Let’s remember that side of things.