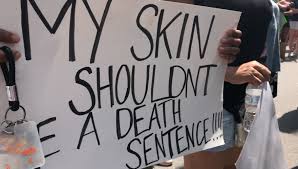 A long time ago, I was hired to be an assistant professor at the John Jay College of Criminal Justice. The then-president of the college, Don Riddle, gave me as a sort of present to the then police commissioner, Patrick V. Murphy, who had as one of his missions the slimming down of the police force. Put another way, he thought his cops were just too fat.

Anyway, that didn’t work, but I did get to spend a lot of time in my office at the police headquarters, which was then in an old building on Center Street. I got to meet a lot of cops and I liked most of them. They were easy to talk to and they knew that they had hard jobs. In fact, they were doing the out-front work in a racist society that has consigned people of color to the economic and social underclass in America. As a result, it was their job to clean up after the rest of the country. We’ve all heard about “the thin blue line” that requires cops to stick together. Many people think that the police are the problem but, in fact, they are just the point guards for a racist society. Donald Trump knows that and has figured out a way to excite his base and to more than hint to them that they should perpetuate his racist ideology.

I have an African American grandson whom I adore. He is 6 years old, bright, funny and talented. Given a chance, he has a fabulous future ahead of him. His single father, my son Jonas, and I know that we live in a country in which, when that child grows up a little and goes for a run in a white neighborhood, two goons with guns may think that it is their right to shoot him down. We know that white privilege is omnipresent in this racist society. If he finds himself in Central Park where there is a dog leash law and asks a white woman, very respectfully, to keep her dog on a leash, we know that she may pick up the phone and call the police because a black man has asked her to obey the law. Sure, she has apologized, but that story is one of thousands.

So when we see actual footage of a police officer with his knee on the neck of a black man and hear that victim crying that he can’t breathe, we are witnessing an execution made possible by what we might call police privilege. The law makes it more than hard to hold that cop responsible because sooner or later, that cop who has been arrested will be judged by a grand jury and a so-called jury of his peers. All it will take is one racist on that jury to say no, that the cop was only doing his job. If that happens, the message is sent that it’s business as usual.

We all understand the level of frustration that has led to the riots in Minneapolis. If you are as old as I am, you remember Watts and Rodney King and the fires. Donald Trump has to be chortling about this. He’s already conflating the peaceful protestors with the looters, calling them “thugs.” He is taking advantage of the suffering of people of color and using it for political gain. He could not have been given a better, more cynical political present. Until these protests began, he was losing to Joe Biden but now he will surely run with the news that white society is in danger. The voters in the middle might well be influenced.

Yes, we get it. We know about American racism. We know that a cop killed a man while other cops stood by. Joe Biden gets it and says so. America has to divest itself once and for all of its racist past and racist president. Now’s the time.