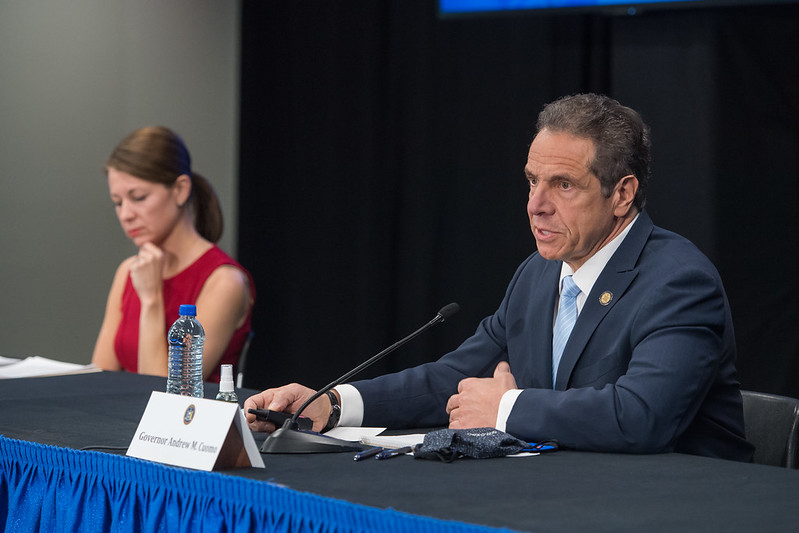 New York Gov. Andrew Cuomo at his daily COVID-19 press briefing on May 10. Photo: Darren McGee, Office of the Governor

Let’s face it: There is no current political commodity hotter than Andrew Cuomo. One Siena poll had him at a 77 percent approval rating in New York. Compare that with Donald Trump, in the relative basement. Cuomo has cleverly positioned himself as a moderate Democrat, unlike the more flamboyant progressives like AOC and her “squad” and Bernie Sanders.

He’s on early-morning television, does his briefings and turns up on the late-night shows. If and when he sleeps is anyone’s guess. I have been immensely flattered that he has chosen to do half an hour a week with me. Unlike the others who interview him mainly about the coronavirus crisis, I am far more interested in what makes the man tick. I have an old friend, a psychiatrist, who heard me interviewing Cuomo and he had one suggestion. When I am speaking with him, I refer to him as “governor” and occasionally as “sir.” The latter, of course, is meant honorifically. For his part, he refers to me as “doctor.” Freud may not have agreed, but I see him as worthy of that respect. The guy is still the governor of New York and many people think that he should be the candidate for president. He’s a natural executive and someone who could step into the top job should events demand it. However, this is the long way around of telling you that my psychiatrist friend (who, as Lee Hays of the Weavers once said of HIS psychiatrist friend, “I see only socially”) gave me the following advice after hearing an interview: “Don’t call him ‘sir’.”

He had several reasons for this. He said that I was a good deal older than the governor, who is 62 while I am a relatively ancient 78. Maybe, but the future of this country may now be in Cuomo’s hands depending on how things break. I can respect him and still disagree with some of what he does. Here are just a few of those disagreements, some of which he has already corrected.

I think that he had placed nursing homes in a bad spot by demanding that they take people testing positive for COVID-19 into the facilities when those nursing homes are breeding grounds for the virus. That last fact is beyond dispute because the age of the residents puts all of them at grave risk. I have no idea where those folks should go but it seems to me that the state could come up with other solutions. They just cleaned out the Javits Center; that was just one possibility. Anyway, showing his best side, Cuomo changed his mind on that one — takes a big man, much bigger than Trump, to do that.

Then there is the move by the Democratic State Committee (I presume that the governor is calling the shots), which seems to be trying to make it quite difficult for the Working Families Party to maintain its place on the ballot by making the conditions to get on the ballot very difficult. There is a perception that since the WFP ran a candidate against Cuomo in the Democratic primary, he was getting even.

There is also the matter of calling off the Democratic primary. At least one state Supreme Court judge called foul on that one. I get that the governor is trying to save lives, but there are “down ballot” contests to be decided and it also gives cover to Donald Trump should he try to interfere with the presidential election — bad news. Apparently, the Democratic State Committee will now carry on with the primary.

So that’s why I believe it’s OK to call him “sir” but not relinquish my right to disagree with him. I like to think that one of the reasons he keeps coming back is that he likes people who respectfully disagree with him.