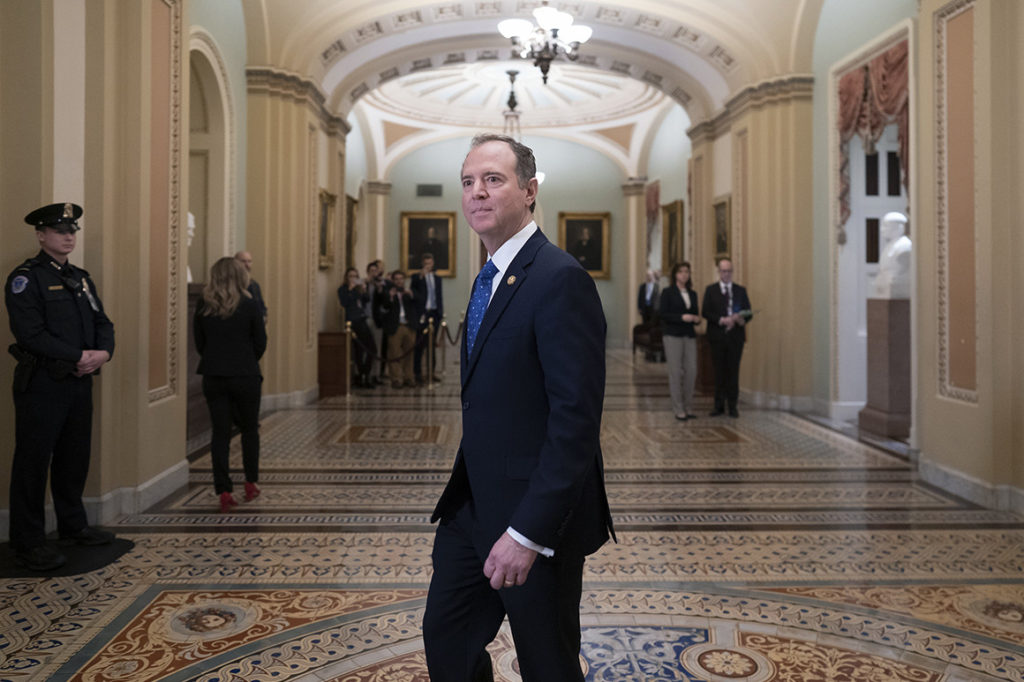 Editor’s Note: In an earlier edition of this column the headline mistakenly identified U.S. Rep. Schiff as senator.

I love Adam Schiff. The guy is my hero. His use of the English language, his reasoning and his ability to put his thoughts across is astounding.

One of his summation speeches as a prosecution House manager has gone viral and may well end up rivaling great orations in American history such as the words of Abraham Lincoln.

Let’s face it: The American republican democracy is at a potential turning point. Like other failed experiments in democracy, there is a point when a despotic, crude, mean-spirited leader comes to the fore and the populace must make a choice: Will they stand tall and insist that what they have had in the past is what they want, or will they be willing to accept what the potential dictator has to offer?

In the case of Donald Trump, the reaction to the man and his power grab has been extraordinary. People call him stupid and bumbling and say that he doesn’t know what he’s doing. I would differ from those folks who underestimate the man. After all, I remind them, he attained the highest office in the United States while mouthing off insults against women and threatening our most coveted institutions, somehow convincing those who need governmental services like Social Security and Medicare that they are the oppressed class.

Hey, Hitler did the same thing and the Germans applauded as he led them into the great abyss. In the case of Trump, he threatens and he cajoles and convinces the “haves” in American society that they should be with him. He knows, as do you, that half the American people don’t vote in presidential elections and that out of that half, more “haves” vote than “have nots.” That’s why these Republican senators are standing as one to support the man, even though we know they are hypocrites of the first order since there is good reason to believe that they have always known who he really is. We certainly know how they feel about the man because so many of them told us during the 2016 primary. Whatever I am saying, his political rivals said in the primary political shoot-out. Characters like Lindsey Graham were clear in their warnings about Trump. When the history books are written, these people will go down as gutless wonders who put their own personal political interests above those of the American people they represent. Future generations will shake their heads.

There is an old song about the drunk sitting on the curb when a pig comes up and sits down by his side: “You can tell a man who boozes by the company he chooses and the pig got up and slowly walked away.” Not this time. Now the same hypocrites who spoke the truth about Trump when they were running against him may whisper to others, but they treasure their seats as senators over the perilous place that the country finds itself in now. That’s both frightening and disgusting.

Trump surrounds himself with characters like Rudy Giuliani. He knows Trump well enough to suggest that Trump had better not turn on him as he has on so many others because he has “insurance.” One can only suspect that the “insurance” is enough to sink Trump. The amazing thing, of course, is that no matter how much trash comes out about Trump, members of his base, the new Republicans, are there to support him.

Adam Schiff suggests that if you alienate Trump, you will end up with your head on a pike. This is the way that dictators and would-be dictators have always risen to power, no matter what the color of their shirts. We look back in history at the Hitler supporters like Goebbels and Eichmann and we know what happened to them. In calling these senators out, Adam Schiff shows great personal courage. He’s my hero.