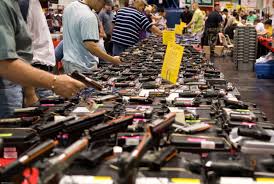 It’s all about guns. No one wants to get themselves, their children or their parents shot.

We live in an insane country that honors guns. There is major sociology involved. Let’s face it: This country is spit down the middle. Sometimes it comes down to haves and have nots. When you ask someone why they need a gun, be it a revolver or a much more “efficient” killing machine, you are likely to hear that the owner needs protection. Never mind that the deranged people who have been perpetrating these terrible crimes are white and members of the group that says it needs to be defended. The point is that the gun does terrible things but is also representative of the inequality that exists in America. This is classic “haves” protecting themselves from the “others.” Sound familiar? You bet! It’s classic Trump and that is why no matter what he says about standing up to the NRA, he’s full of it. The NRA has made it clear that its people want nothing to do with gun reform. Not so implicitly, they are saying to Trump that his election depends on the support of the gun lobby. I keep asking myself where the NRA types are going to go with their votes if Trump disappoints them. Are they going to vote for the Democrats? Doubtful.

Andrew Cuomo got way out in front after the terrible Sandy Hook massacre. He twisted the arms of the Republicans in the state Senate and literally made them pass the “SAFE Act” along with their Democratic colleagues in the Assembly. You will still see signs on upstate lawns calling for repeal of the SAFE Act.

Interestingly, we have yet to see a female mass murderer. Could it be that the gun is an extension of the male penis? I know that there are people reading this who will take exception to the male anatomy analogy, but follow it through. Some young white men who have not yet mastered their sexual impulses may be taking out their frustrations by killing. Obviously, one could carry the psychological analysis further by looking to the Oedipus model. In one case, the mother called the police to say that her son has a gun and she’s afraid of his ability to handle it. In another case, the son said he traveled 600 miles so that his parents wouldn’t know that he was the shooter. However, when the time came and the shooting occurred, he was quick to stop a motorcycle policeman and confess.

So give some credit to Gov. Cuomo. Taking a page out of his father’s courage around the death penalty, Cuomo is playing to a national audience, perhaps with an eye to 2024 should the Democrats blow it in 2020. Of course, he announced that he is a gun owner for those who needed to be reassured about his manhood. The man can read the polls. He knows that the country is screaming, “Enough!”

The NRA is opposed to the most sensible reforms. God forbid there should be background checks for those attempting to purchase guns and ammunition. Why in the world does anyone need an assault weapon? Ban them. How about the “red flag law” that allows us to confiscate guns from people deemed dangerous?

As for me, sorry, I would take everyone’s guns away and if anyone were found with a gun, I would make sure that the punishment was so great that they would think hard before they got their hands on another one. “Enough” has a political potency that people will coalesce around. We know that we can’t count on Mitch McConnell, whose polls are so low that he may actually, and appropriately, lose. No one is fooled. The last thing his Republican Senate caucus wants is to have to vote and be held accountable.

This has gone just too far.