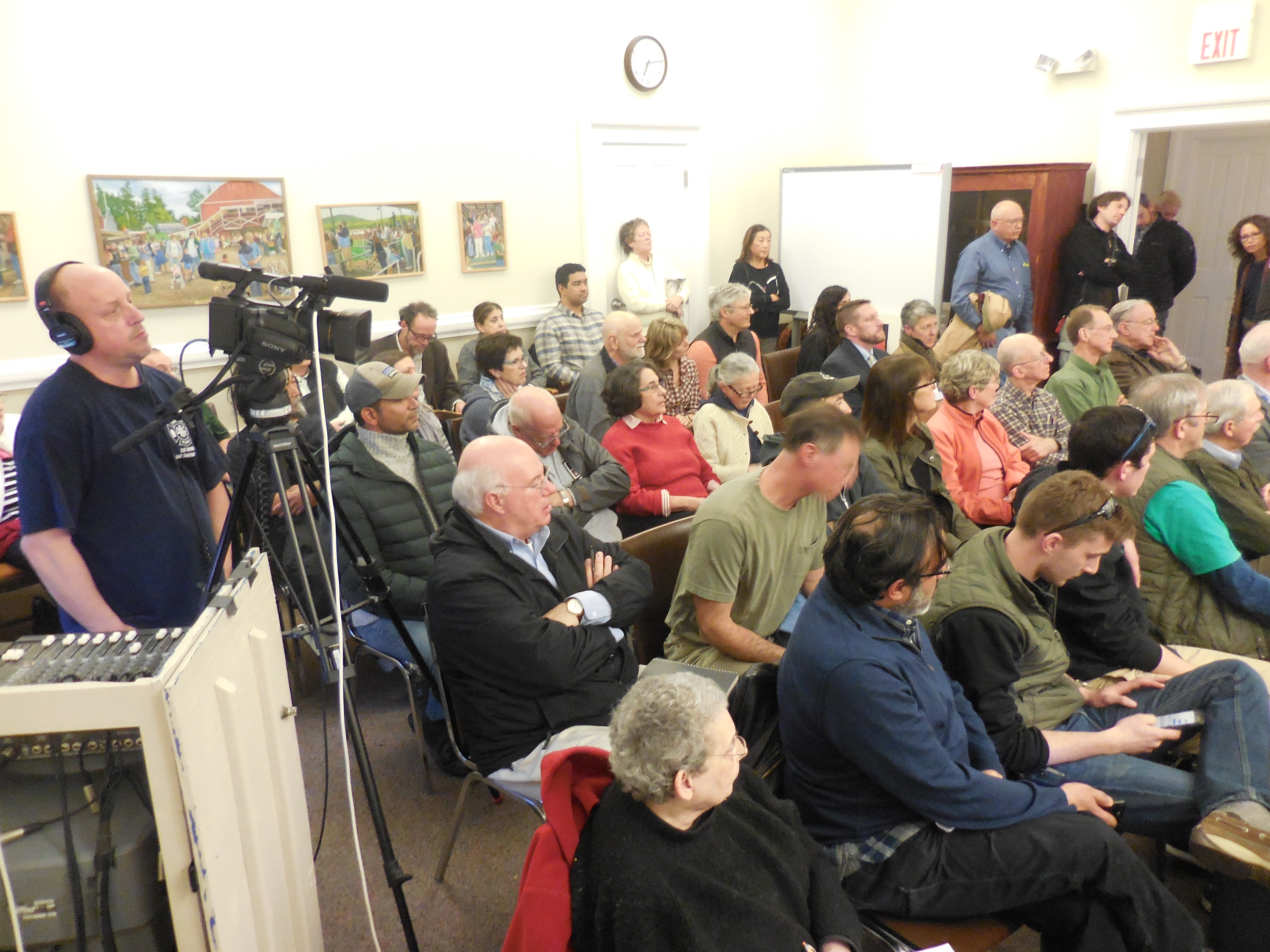 Great Barrington — The owners of the Great Barrington airport continue to encounter headwinds in their quest to build three new hangars at the facility west of town on Route 71. It seems every time they appear before a town board or commission, new objections are raised by neighbors and others. Hearings have been continued as town officials review new material and discover murky legalities.

Such was the case Monday evening (March 27) as representatives from Berkshire Aviation went before the Select Board for the second time in an effort to secure a special permit to build the hangars and to justify the 86-year-old airport’s legal existence under a zoning code that was first enacted only two years after it was built.

In the standing-room-only selectmen’s room, Berkshire Aviation attorney Lori A. Robbins came forward with new information from town assessor Chris Lamarre and Fire Chief Charlie Burger. And there was a letter from the Southern Berkshire Chamber of Commerce extolling the airport’s virtues.

In response to complaints from neighbors that the new hangars would lower their property values, Robbins cited a letter from Lamarre that stated, “There is no discernable evidence leading me to conclude future real property values will be negatively impacted by such an occasion and to assert otherwise is speculation.”

Indeed, Lamarre added, many homes on Seekonk Cross Road and Egremont Plain Road, where the airport is located, have sold for a price in excess of their assessed value within the last three years.

Burger addressed the concerns some airport critics had about the storage and use of combustible and flammable substances on the property, adding that he “has no objection to the construction” and that “[the substances] are in small quantities and in compliance with state regulations regarding these materials.”

But Rich Dohoney, an attorney for airport neighbors Marc Fasteau and Anne Fredericks of 77 Seekonk Cross Road, had other ideas. He presented a list of proposed conditions that his clients would like to see attached to any special permit issued. (The text of these conditions is reproduced below.)

Among those conditions is that the runways not be lengthened (the owners have said this is impossible anyway, given the constraints of the property). Dohoney also listed limits on retail activities, including at the flight school and the aircraft repair business, limits on the number of aircraft housed at the airport (50), and restrictions on military helicopter activity (airport officials have said they have no control over this).

Dohoney also insisted there be no sales of leaded fuel on the property. As reported by The Edge last month, the Walter J. Koladza Airport, as the Great Barrington facility is known, sells leaded aviation fuel — or so-called “avgas” — at its self-serve pump.

Dohoney also offered an alternate interpretation of what the special permit, if approved, would allow the airport to do. He suggested one or two more special permits would be needed: one to codify the airport’s legal status; another for the proposed hangars; and yet another for the structures to be built in the town’s water quality protection zone.

“A yes or no vote on this does not authorize those hangars,” Dohoney said. “Nonconforming uses are a necessary evil but they are not to be encouraged or to grow.”

The airport was built before the town established its first zoning code in 1931. It is therefore a pre-existing nonconforming use and the site lies in an aquifer protection zone next to the Green River. Any expansion requires a special permit from the selectmen.

But the airport took the unusual step of voluntarily applying after the fact for the special permit, which includes the proposal to add the new hangars, “In order to quell any concerns about the legal status of use of the property as an airport,” Robbins said last month.

“In my opinion, if the [special permit] application were to be approved as proposed, it would include allowing the three hangars in the manner and the location proposed,” Town Planner Chris Rembold told this reporter. “They would also be subject to Planning Board site plan approval.”

As for property values, both Fasteau and Dohoney said they disagreed with the assessor, with Dohoney adding, “People bought their homes thinking it was a hobby airport.” This elicited laughter in the audience.

“What’s happened in the past is not a good measure of what would happen with three new hangars,” Fasteau insisted. “I respect our assessor but I disagree.”

Airport owner Rick Solan and manager Ken Krentza said the airport’s underground fuel tanks are scheduled to be replaced in August, as required every 20 years.

“To solve the problem, we are putting them in above-ground at a higher cost to preserve the land and not risk having fuel go into river,” Krentza said.

At one point, Solan got into a shouting match with Claudia Shapiro, an abutter who has sued Berkshire Aviation and the town multiple times and claims she actually owns part of the airport’s property. When Select Board Chairman Sean Stanton called for order and asked her to show some restraint, Shapiro mockingly urged him to call the police.

Michael Mah, a Pittsfield-based software engineer who keeps his plane in Pittsfield because Great Barrington doesn’t have indoor storage, warned of the alternative if Koladza were to close.

“I have two words as an alternative to the airport and that is Desisto School,” Mah said, referring to a massive hotel and residential resort planned for the former private school campus in Stockbridge.

In the end, the board asked Rembold to come up with a list of conditions to attach to the special permit application when the hearing continues on May 15 at 6:30 p.m. at Town Hall.

Text of the proposed conditions for a special permit, as presented to the Selectboard:

To: Town of Great Barrington

Re: Application for Special Permit

Please accept the following as proposed conditions to be imposed on the Special Permit requested by Berkshire Aviation Enterprises, Inc. (“BAE”) for the property located at 70 Egremont Plain Road (the “Premises”).