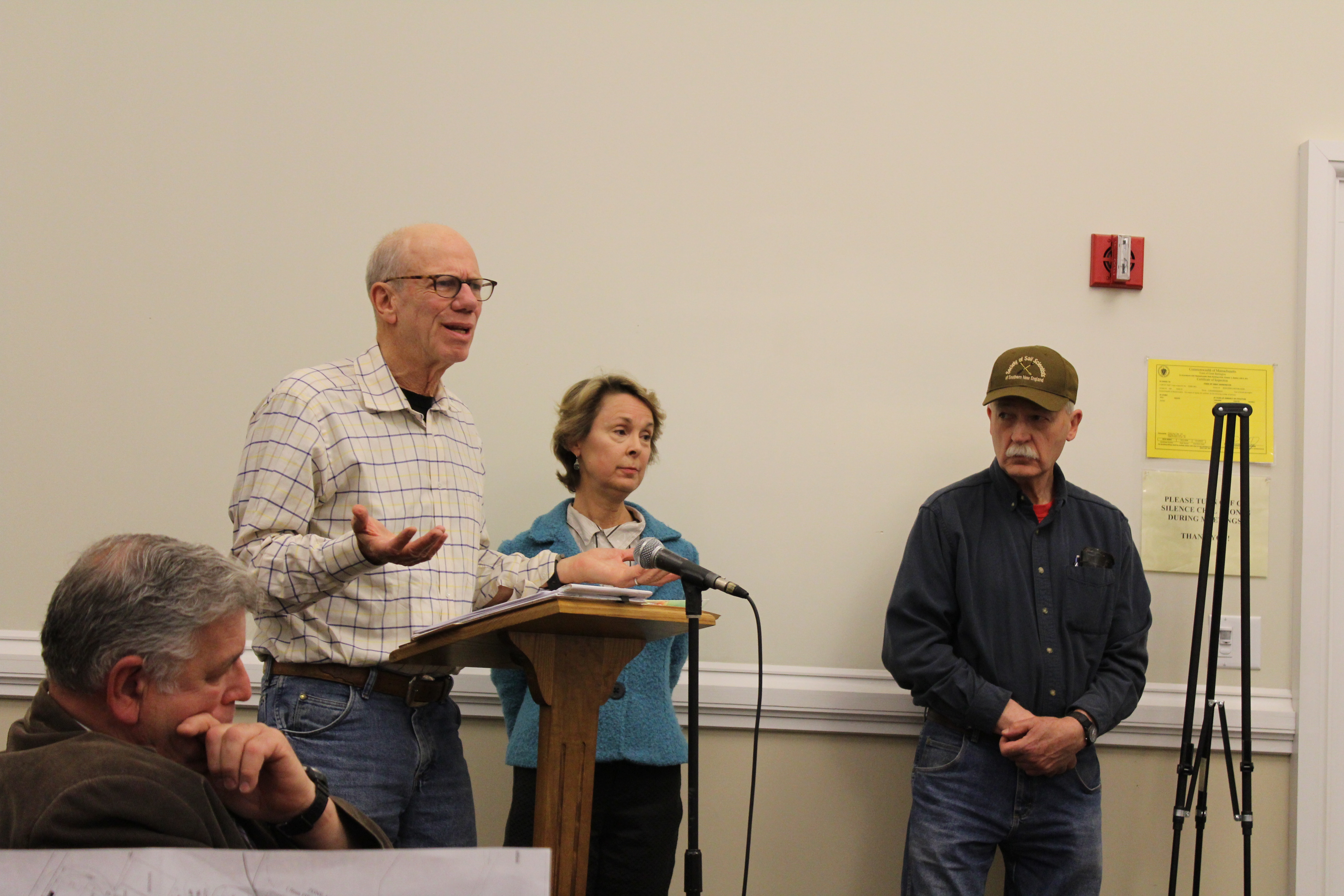 Great Barrington — It was a public hearing like no other that this writer has covered during 20 years as a journalist.

Amid plans for expansion, officials from the Great Barrington Airport had approached the Selectboard about obtaining a special permit to codify, as far as the town’s zoning regulations are concerned, the airport’s legality. The public hearing had been continued twice, most recently to last night (May 15).

Monday’s hearing looked as if it would be a barnburner, with neighboring property owners ready to oppose the airport’s proposed addition of three new hangars, and another nearby property owner, armed with his lawyer, poised to suggest the airport was responsible for elevated levels of lead in his drinking water.

Once the hearing convened, the airport’s attorney, Lori Robbins, and its engineer, Ralph Stanton, made presentations to the Selectboard and then poof: one of the airport’s owners went to the podium and announced, “I don’t want a special permit.” To which the airport’s manager Ken Krentza replied, while glaring at his boss, “We need to talk about that.”

And so the hearing was continued — again — until June 12. It was that kind of night.

Neighboring property owner Marc Fasteau had sent an email to the news media in advance of the hearing. In that message, Fasteau attached a revised list of conditions he wanted board members to consider if they chose to grant the special permit.

In addition, Fasteau said he had the water tested in the house he shares at 77 Seekonk Cross Road with his wife Anne Fredericks and found “actionable” levels of lead, as defined by the U.S. Environmental Protection Agency.

“We do not have direct evidence that the lead is from the airport, however, the town in 2004 stated that the airport was ‘the greatest threat to our drinking water’,” Fasteau said in his email.

Fasteau’s attorney Richard Dohoney was also present, as were about 30 other interested parties who appeared prepared to speak out. But it was not to be, after airport partner Jim Jacobs’ frustration boiled over and he stole their thunder.

Jacobs told the board, “I feel that we have suffered a lot of abuse … we as an airport do not make any money. We have always put the community first. I sit around the table with my guys and they feel beaten down by this permit.”

“If we can’t get hangars, we can’t get them,” Jacobs continued. In that case, Jacobs added, “We go on the way we are.”

Select Board Chairman Sean Stanton appeared surprised at Jacobs’ comments. He urged him to “talk to the rest of your ownership and your lawyer.”

At the previous hearing in March, Fasteau and Fredericks, through his attorney, had presented a list of proposed conditions they would like to see attached to any special permit.

Among those conditions is that the runways not be lengthened (the owners have said this is impossible anyway, given the constraints of the property). Dohoney also listed limits on retail activities, including at the flight school and the aircraft repair business, limits on the number of aircraft housed at the airport (50), and restrictions on military helicopter activity (airport officials have said they have no control over this).

In his latest list of conditions, Fasteau suggested “termination of the special permit when the current owners no longer hold a 60+ percent ownership interest.”

Fasteau also insisted in his statement that the airport has done “nothing to remove their two or three buried lead gas tanks which were supposed to be removed by 2017 … and have continued to sell leaded gas on the premises (not allowed in the R-4 zone).”

Fasteau added that the more than 40 planes parked on their property are “in a location where the soils are primarily fast draining gravel” with “no protections against oil and fuel leaks,” even as “the public gas pump is unlocked and unmanned.”

And Fasteau sounded an alarm about the aquifer near the airport which sits near a public water supply.

“Children may now be drinking lead contaminated water. The health and safety of our citizens require a Phase II Environmental Site Assessment and a halt to further development at the airport pending the result of the Assessment.”

Airport officials left the selectmen’s meeting room after the hearing was continued. In a follow-up interview, Krentza said, “The next step is to continue to pursue this special permit and continue as we have for construction of the proposed hangars.”

As for Fasteau’s suggestion that the airport was responsible for the lead levels in his house, Krentza said, “He has given no evidence that supports his theory for his lead levels. He lives about three quarters of a mile away from the airport. Why imply that the airport has anything to do with it?”

The airport was built before the town established its first zoning code in 1931. It is, therefore, a pre-existing nonconforming use and the site lies in an aquifer protection zone next to the Green River. Any expansion requires a special permit from the selectboard.

But the airport took the unusual step of voluntarily applying — after the fact — for the special permit, which includes the proposal to add the new hangars, “In order to quell any concerns about the legal status of use of the property as an airport,” Robbins explained at the first hearing.

At one point Monday night, Claudia Shapiro, an unruly abutter who has sued the airport and the town multiple times and claims she actually owns part of the airport’s property, asked Stanton, “Can I say something, Sean, please?”

“No!” Stanton replied to much applause and laughter.