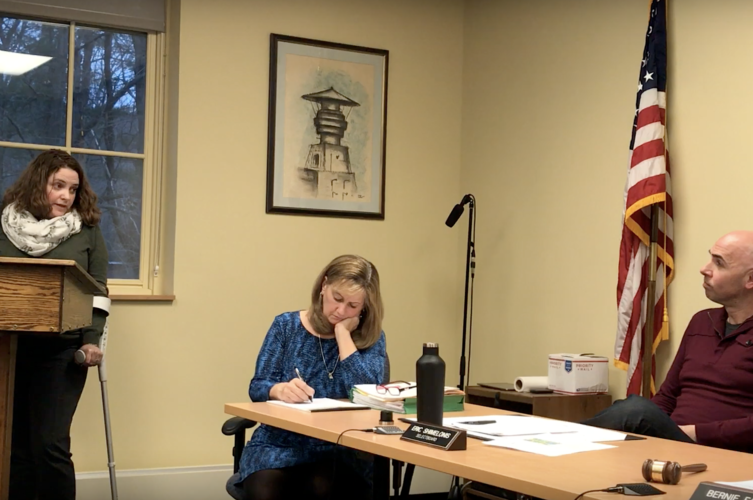 West Stockbridge — Many residents of this small town were hoping for a quiet night after a tumultuous select board meeting last week that resulted in the fire chief walking out of Town Hall in disgust after being placed on administrative leave.

Anyone looking for calm at Wednesday night’s West Stockbridge Select Board meeting had to be disappointed. Eventually there was some healing, but not before the selectman responsible for Chief Peter Skorput’s removal was berated by an emergency medical technician for the fire department and by the victim of a controversial fire on Stockbridge Road last month.

“Last week was a tough week and it’s something that, really, the town is never going to forget,” select board Chairman Bernie Fallon told the 50 or so citizens crowded into the Town Hall meeting room. “I was disappointed and sad at the way things happened.”

On March 4, Skorput was ousted after questions were raised about his leadership style and his competence. In addition, Skorput was embroiled in a months-long scandal that resulted in a $5,000 fine handed down by the State Ethics Commission. After Skorput was removed, the selectmen appointed Richmond fire Chief Steve Traver as interim chief in West Stockbridge.

Also at issue was a 2016 report by Municipal Resources, a municipal consulting firm based in Meredith, New Hampshire, that raised serious questions about management and finances in the 21-member fire department. Click here to read MR’s fire services management letter and here to view the administrative review.

This week Fallon was hoping for a night of calm and healing, but a pair of citizens dashed his hopes by excoriating select board member Eric Shimelonis, a former West Stockbridge firefighter and a relative newcomer to the town who had led the charge to oust Skorput, who himself had been a member of the volunteer fire department for 30 years.

See video below of West Stockbridge residents Dan Breton and Amanda Gadd castigating Selectman Eric Shimelonis for his tactics in trying to reform the fire department:

Most recently, there were three structure fires, including one that burned a Stockbridge Road home to the ground, which raised more questions about the department’s policies and procedures.

To illustrate his point, Shimelonis held aloft a mounted photo last week of the burning home and noted that his 4-year-old son had noticed right away the problem: There was no water at the scene.

“To insinuate that we of the West Stockbridge Fire Department don’t have enough intellect to outsmart a 4-year-old, or to be able to look at a picture and see what’s missing from a fire, it’s insulting,” Breton said. “You meant it to be insulting. It’s arrogant and it’s vindictive.”

Breton, who has been a friend of Shimelonis for 20 years, added that, “I think it’s an example of the vitriol that you’ve been going around publicly and privately spreading about the West Stockbridge Fire Department.”

Breton said Shimelonis’ efforts, both publicly and behind the scenes, have hurt morale in the department and led to its pariah status among some neighboring departments that no longer wanted West Stockbridge to respond to mutual aid calls. Breton further noted that while Shimelonis was a member of the department from May 2017 until he resigned in October 2018, he had written a column in the Local Yokel, a town newsletter, praising Skorput.

“The same Eric who wants you to believe that Chief Skorput is incapable of being chief, that the West Stockbridge Fire Department is seen as a liability to the towns surrounding us and that you should all be fearful,” Breton continued.

“Don’t you think the truth lies somewhere in the middle of this?” Breton asked rhetorically. “So here we are and it’s a hell of a mess that you’ve made. It breaks my heart.”

Of Shimelonis’ tactics, Breton added, “You’ve had a scorched-earth approach to removing Peter Skorput from his position as fire chief and you did.”

Amanda Gadd was living in the house at 19 Stockbridge Road when it caught fire late on the night of Feb. 1. Gadd, who is disabled and on crutches, made it out with her animals before the home went up in flames.

Gadd thanked members of the West Stockbridge Fire Department who fought the fire, but had harsh words for Shimelonis, who, she said, never called to inquire of her well-being or that of Elizabeth Petty, who owned the home.

“At the last select board meeting, Mr. Shimelonis had the audacity to exploit my personal tragedy for his own political agenda,” Gadd said, her voice quivering with emotion. “I learned of his actions in the subsequent newspaper articles. You should singularly and deeply be ashamed.”

But Gadd acknowledged the fire department has problems, recalling that, 20 years ago, it was regarded as one of the best departments in the region. Yet she mostly blamed the select board for its current condition.

“We have allowed it to fall … into disrepair and ill repute,” Gadd lamented. “I learned of significantly dangerous ineptitudes in the actual process of bringing the fire at my home to heel.”

It took about an hour to get water to the fire because alarms were delayed and a tanker shuttle was slow in being set up. Faster action might have saved the house, she said.

“It is inevitable that without addressing the fire department’s issues, someone is going to die and it will be the fault of the select board,” Gadd continued, suggesting more money for training and equipment. “It is your responsibility to take action.”

For his part, Shimelonis apologized for the “theatrics” of holding up the photo of the burning house and acknowledged that, in hindsight, “it was in poor taste.” But he insisted that his actions in removing Skorput (fellow board member Doane Perry also voted to place Skorput on administrative leave, while Fallon abstained) that he was trying to improve the department.

“We made a really difficult choice last week to make an administrative change in the fire department,” Shimelonis explained. “I think we’ve taken the action that you’ve asked for in your speech just now.”

Shimelonis added that, “I do hope we can move forward and I want to take a very careful path forward and kind of stay out of the way of this.”

Eventually, the healing started when the board called up Traver, the interim chief from Richmond, to explain the path forward. See video below of Traver explaining the current situation at the department and answering questions from the board and audience members:

The upshot is that almost everyone in the room agreed that it would be a good idea to hire a consultant to conduct an “after-action review.” Fallon said that Traver is conducting an informal review in his duties as the new interim chief. Traver added that the remaining members of the fire department are “doing a fantastic job” and are making progress on improving the department.

“We’re not going to build Rome in a day,” Traver said.

Fallon said the after-action review would look further at systems and practices. Perry said it “would be an opportunity to do an in-depth credible review and I think we should go for it, with respect for everything that’s good about Peter Skorput, but we need to take this action.”

“I think an objective review is going to make peace between the two [sides] and so I’m for it,” Shimelonis added.

In response to a question from the audience, Fallon said he found the first audit by MR to be “helpful.” The scope of the after-action review would be different, however. It would look specifically into the last three structure fires, determine the strengths and weaknesses of the department, and provide recommendations for improvement through training and equipment upgrades.

The board voted unanimously to hire former Springfield fire Commissioner Joseph A. Conant for $6,800 to conduct the review. There were sighs of relief. Let the healing begin.