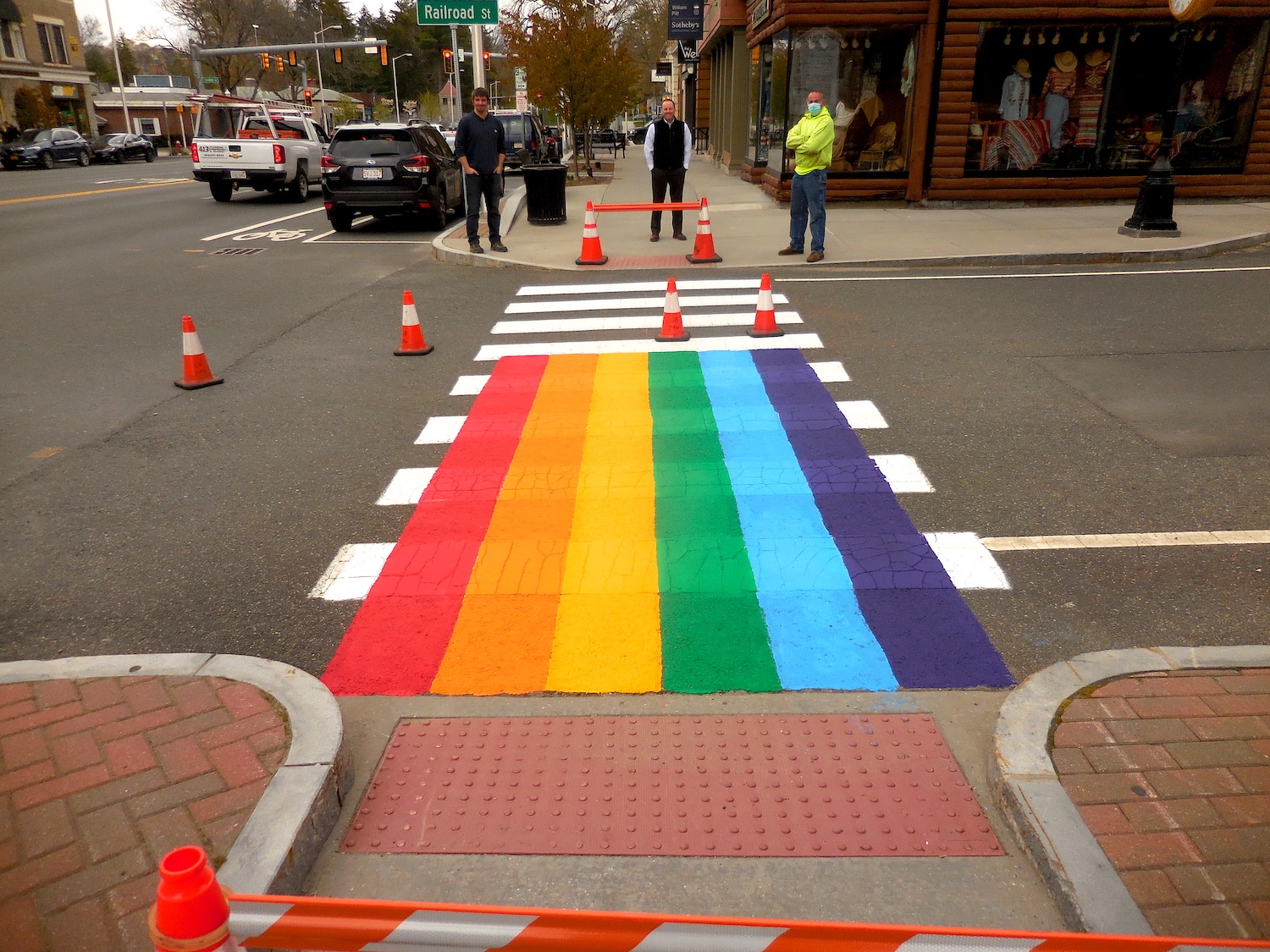 On Wednesday morning, crews from the Department of Public Works began repainting select crosswalks in rainbow colors. Crosswalks in various high-traffic areas of town will get new colors, including crossings on Railroad, Castle, Elm, Bridge and Church streets in Great Barrington, as will Depot Street in Housatonic.

“The idea was to recognize and celebrate diversity in our community,” town manager Mark Pruhenski said in an interview. “The colors symbolize hope in a time of uncertainty.”

Sure enough, bright and early on a beautiful spring morning, DPW chief Sean Van Deusen and his crew began applying stripes of six colors to the crosswalks. None of the crosswalks that traverse Main Street will be painted, however.

In 2016, not long after the Main Street reconstruction was completed, the town got into a tangle with the state Department of Transportation after town crews added red paint to the crosswalks that traverse Main Street.

MassDOT, which funded the $6 million project, made a stink about the addition of the color scheme because the town had not received permission from the state, which argued that “the town is required to remove the additional color.” In the end, MassDOT relented, telling town officials that when the red stripes wear off, the town will not repaint them but nor would the town be compelled to remove them.

The reaction on many social media accounts to the new rainbow colors was very positive, with selectboard member Leigh Davis congratulating Pruhenski and Van Deusen and others on a job well done.

“Quick, someone send this to Bill O’Reilly!” cracked Brian Tobin, a member of the Mount Washington Selectboard. It was a reference to a segment the disgraced former Fox News host produced in 2007, claiming Great Barrington had banned Christmas lights because of global warming. O’Reilly’s claim has since been debunked.

Not everyone was thrilled with the new rainbow color scheme. One commenter said it was a waste of money, to which selectman Ed Abrahams replied that the crosswalks were due for a spring repainting anyway.

“The crews were going to repaint the crosswalks anyway due to weathering” agreed Pruhenski. “We saw this as an opportunity to celebrate both the unity and diversity that strengthens our community.”

“At the prest [sic] time many small businesses, mine included, are trying very hard to survive. Many citizens are depending on food banks. This is not a good time to play Gay Pride games with our sidewalks. If we wanted to turn Great Barrington into a cicus [sic] act would would have hired a ring master and not a town manager.”

While the rainbow was at one time widely recognized as a symbol of the LGBTQ community, its meaning has expanded greatly to include peace, serenity and harmony. In recent weeks, the rainbow symbol has become especially popular in Europe as a sign of hope during the coronavirus pandemic. The rainbow is also an important symbol in the biblical story of Noah’s Ark, appearing in the sky after the great flood.

In a statement earlier Wednesday, Pruhenski said the rainbow symbol is widely believed to have been launched in Italy, appearing in communities from western Europe to the United States.

“It is meant to bring hope to people practicing social distancing and to foster a sense of community unity during this global challenge,” he said. “We are excited to join households and communities both here and around the world, who share the rainbow symbol as a sign of hope.”