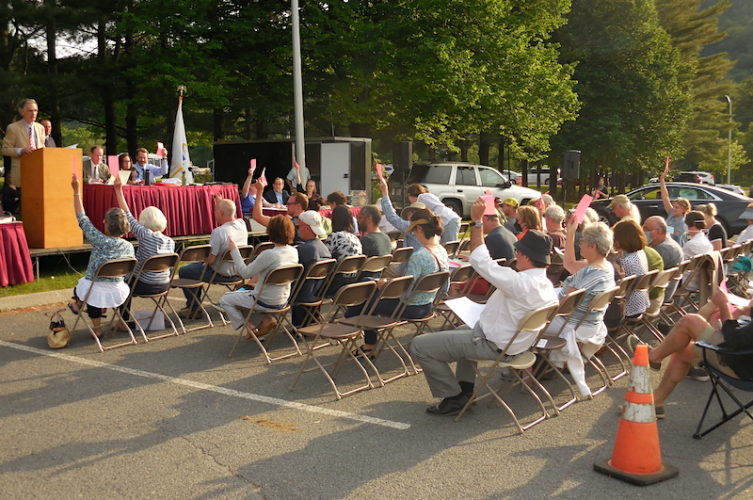 Great Barrington — As expected, last night’s Great Barrington annual town meeting was dominated by one issue: what to do about the proliferation of Airbnb-style short-term rentals. And its dominance was driven home by the fact that all the other warrant items, including the budget and zoning bylaw changes, passed with little dissent.

The complete warrant for what turned out to be a four-hour meeting can be found here. After a spirited debate of roughly an hour, a controversial STR proposal that originated from selectboard member Leigh Davis passed by a margin that was perhaps larger than expected: 207–111. Town Clerk Jennifer Messina said 380 Great Barrington residents attended the meeting.

See Edge video below of the discussion and vote on the proposed short-term rental bylaw endorsed by the selectboard:

The proposal, which earlier this year was endorsed 3–1 by the selectboard, would allow STRs in either a primary or secondary unit. If the owner lives “on-premises, s/he can rent the STR for an unlimited number of nights. If the owner lives elsewhere, the maximum number of nights it can be rented is 150 days per year. A less stringent competing proposal placed on the warrant via citizen petition failed.

During the lengthy discussion, speakers reiterated previously stated reasons for supporting or opposing the measure. Billy Sothern, a lawyer and writer who moved with his family to Great Barrington in November after 21 years in Louisiana, said he saw firsthand what STRs did to his New Orleans neighborhood.

“The majority of houses were STRs and the people who lived there had no idea who was going to be our neighbor day-to-day,” said Sothern, who recently wrote a letter to the editor of The Edge in support of the bylaw and describing his experience.

Sothern said things got so bad that the situation created a “backlash against STRs.” He opposed what he termed a “corporate-driven effort to maintain deregulation of STRs in New Orleans.” The result was a regulatory regime — since amended — placing “heavy restrictions” on STRs throughout the city.

“After the law passed, the STRs in my neighborhood became residences for full-time residents,” Sothern said. “So we went from having a block with neighbors to a block with STRs, and after the regulations were passed in New Orleans … they went back to being neighborhoods and my kids had neighbors and I had someone next door that I could get a cup of milk from.”

Others weren’t exactly thrilled with the proposal. Sarah Dixon said she has rented homes before to seasonal visitors to provide income “to offset … the expensive cost of living here in town.” She insisted that she did not want the town to take away her rights to use her property as she sees fit.

“This bylaw was created with minimal research and, quite simply, I cannot vote for a bylaw that’s going to raise my taxes and also lower my property values,” said Dixon, who did not elaborate on how the bylaw would raise her taxes.

Among the others who spoke in opposition was longtime town planning board member, architect and real estate broker Jonathan Hankin, who argued that, while paved with good intentions, the proposal would not have the intended effect and would infringe on property rights.

In prepared remarks, Sharon Gregory, the former chair of the town finance committee, described the proposal as a “game-changer” and cited the example of what has happened to the Outer Cape Cod town of Provincetown, which is rapidly losing full-time residents. She also noted that Airbnb had sent out an email to its STR operators in Great Barrington urging them to vote against the proposed bylaw, known as Article 25 on the warrant.

“By not passing 25, we are keeping the barn door open,” Gregory said. “We are inviting non-residents to buy up more of our housing stock. Realtors will verify that investor bidders, who will outbid most residents, are waiting for our voting results.”

The highlight of the evening was an impassioned speech from a downtown bartender, Christopher Hale, who works at Miller’s Pub. It begins at 21:50 in the video above. Hale cast the issue in terms of supply and demand.

“People come here to America’s premier cultural resort, cultural destination … for the drinks, the shows, the arts, the investment in the community, the nature,” Hale said. “That is the supply you are creating the demand for.” Hale cast the proposal as “an important firewall against the slow bleed” of working class people and struggling artists and “everybody who makes the Berkshires great.” He described the situation as “a shame.”

Referring to the closing over the last two years of the town’s only remaining laundromats, downtown on School Street and south of town at Big Y Plaza, Hale added, with his voice rising in indignation, “My friends have to drive 30 minutes to a laundromat, with $5 gas. We have six [cannabis] dispensaries and nowhere for people who are working class to do their laundry.”

And so it went. All other warrant articles passed, including the town budget items, its contribution to the Berkshire Hills Regional School District, funding for body cams for the Great Barrington Police Department, eight Community Preservation Act projects, three zoning bylaws and a 3-percent impact fee on STRs to be allocated to the town Affordable Housing Trust.

See video below of the entire 2022 Great Barrington annual town meeting courtesy of Community Television of the Southern Berkshires, as well as additional Edge photos of the meeting: