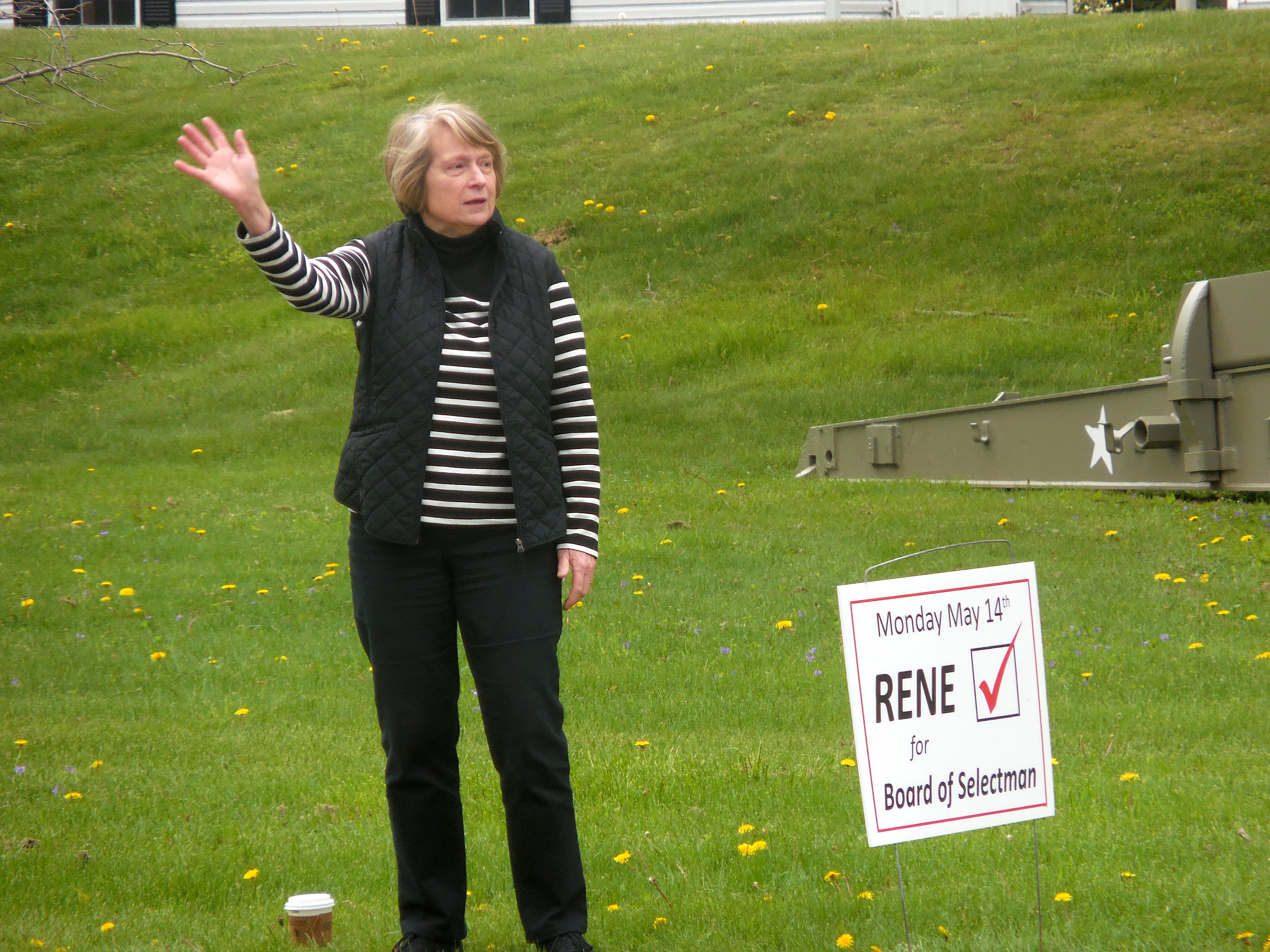 Rene Wood, who won her race to regain her seat on the Board of Selectmen, waved to motorists on Route 7 during the election today. Photo: Terry Cowgill

Editor’s note: This article has been updated to include a link to the full results of the New Marlborough town elections and the margin of victory for Question 1.

Sheffield —It was a mixed bag for incumbent selectmen in two South County towns during the annual town elections.

In Sheffield, Rene Wood, a former longtime member of the board of the selectmen and the planning board, will return to the selectboard after defeating incumbent Andrew Petersen.

Wood bested Petersen, who is completing his first three-year term, by a margin of 402-322. Petersen had replaced Rene Wood, who, in 2015, opted not to run for re-election. Click here to see the ballot count and the results of the other races, most of which were uncontested.

“I’m thrilled,” Wood told The Edge. She stood out in front of the senior center on Route 7 Monday near her sign waving to passersby. “It was wonderful day as far as I’m concerned, and a wonderful race. I look forward to going in tomorrow and getting sworn in, and stopping by Gulotta’s and thanking Andy for his service.”

Wood, a Democrat, had served two consecutive three-year terms, as she had pledged to when she mounted her first campaign for selectman in 2009. But earlier this year she got the itch to return.

In announcing her campaign last month, Wood highlighted four areas she’d like to focus on if her quest to sit again on the board is successful: strengthening the town’s finances, more effectively dealing with personnel issues, advocating with state and regional organizations for town funding, and increasing citizen involvement and transparency in town government.

Petersen, an independent, is an auto technician at Gulotta’s, the gas station and convenience store just around the corner from Town Hall. He has focused on economic development and trying to come up with a solution for the shortfall in revenue the town experiences as a result of property under nonprofit ownership being off the tax rolls.

In New Marlborough, three-term selectman Tara White beat back a strong challenge from architect and real estate developer Daniel Doern. The margin of victory for White was 257-201.

A longtime New Marlborough resident, White has been on the board for nine years and currently serves as chair. Her supporters had toutedher experience and her ability to secure grants for the town and obtain land to enlarge the Southfield cemetery. White could not be reached for comment after the results were announced.

Click here to see the full results of the New Marlborough town elections, which also included a successful Proposition 2 1/2 override (Question 1) to finance the “purchase of a new highway grader.” The question passed by a margin of 130-104.