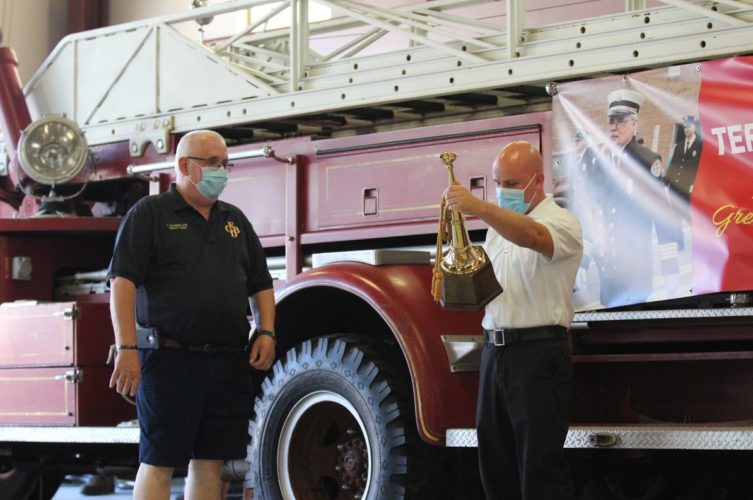 Chamberland announced his impending retirement as Great Barrington’s deputy fire chief earlier this month as his 65th birthday approached: “With sadness in my heart, I announce I will be retiring as an active member of the Great Barrington Fire Department after 44 years of service to our town.”

Chamberland joined the Great Barrington Fire Department in 1976, beginning a distinguished career in which he steadily rose up through the ranks. He served as a firefighter for 19 years, being promoted to lieutenant in 1995, captain in 2003, and deputy chief in 2012.

Burger said Chamberland will not only be missed on the fire-ground, as he is one of the most reliable and dependable responders to calls and trainings, but around the firehouse. He was a very active member of the Great Barrington Firefighters Association as well.

“Terry was always the one working behind the scenes never looking for the spotlight, making sure that everything was taken care of whether it was coordinating the car show, the turkey roll or countless other events the department held through the year,” Burger said. “Terry held the position of treasurer and chaplain for Hope Fire Company and, later, the Great Barrington Firefighters Association for several years.”

At a ceremony held Friday at the Great Barrington Fire Station prior to a “final ride parade,” Burger presented Chamberland with a brass trumpet acknowledging his service to the department: “I want to personally thank Deputy Chief Chamberland for his 44 years of service and dedication to the department and town. If there was one word I would use to describe Deputy Chamberland it is ‘reliable.’ He reliably responded to every incident he was available for and he reliably organized or helped at every fire department function. If Terry said he was going to do something, it was as good as done.”

Another of Chamberland’s qualities was his ability to adapt to and embrace change when it was for the betterment of the fire service and communities served. That is difficult with a job built on tradition that has evolved extensively over the past 44 years, Burger said.

Steve Bannon, chairperson of the selectboard, presented Chamberland with a plaque on behalf of the town and thanked him for his service, not only as a firefighter but for his volunteer work in numerous other ways in the community.

In speaking on his retirement, Chamberland said: “I would like to thank all the chiefs for their leadership and guidance over the years. I also want to thank all my fellow officers and firefighters I have worked with of which there are too many to list. Thank you to our town managers and the many different members of the select board for all your support of the fire department. A large thank you to the residents of the town that have always supported the fire department when needed. Lastly, and most importantly, thank you to my wife Robin and my family for your support, and your total understanding as meals and occasions would get interrupted at all hours of the day and night. I couldn’t have done it for all these years without your total support.”