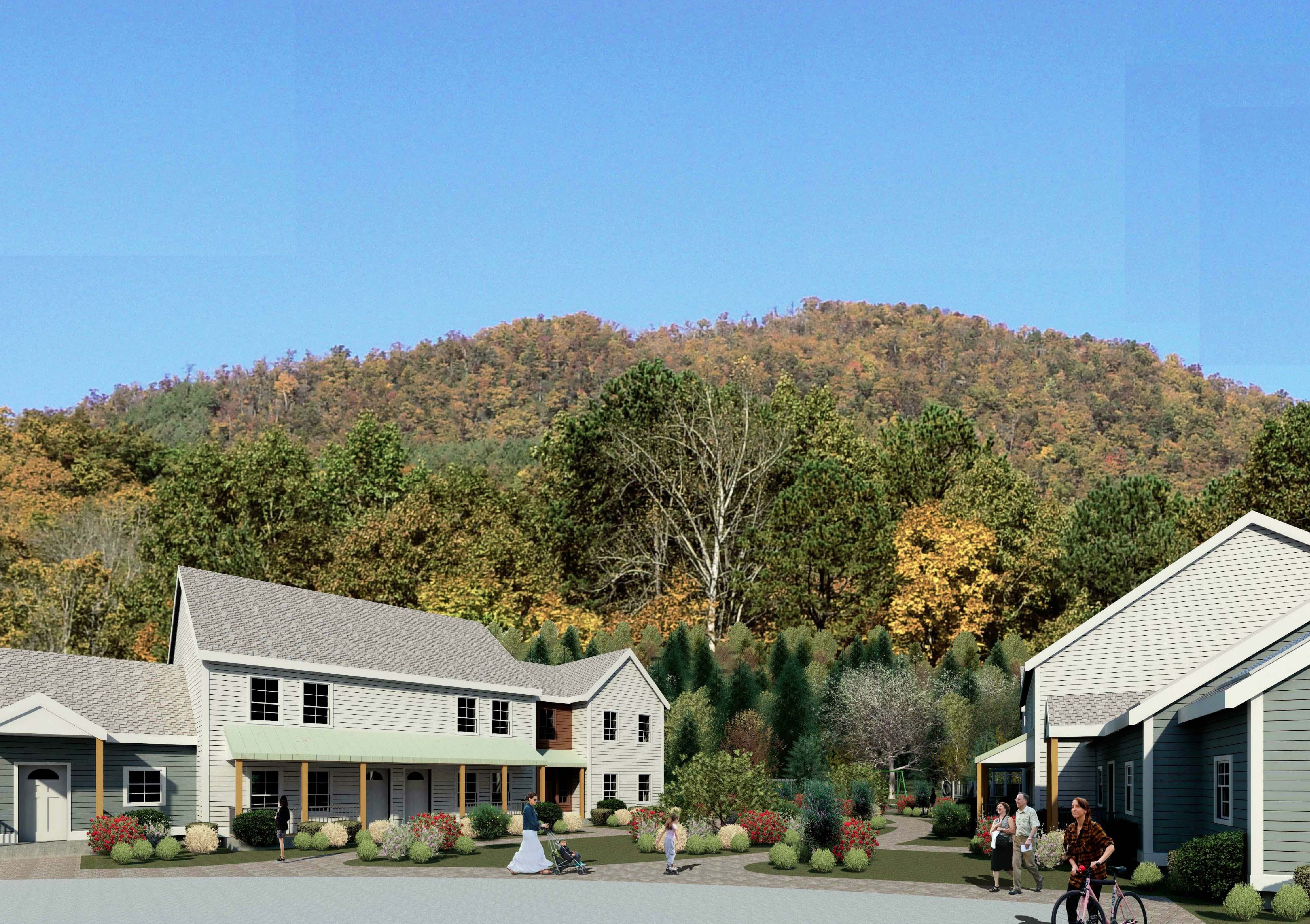 Great Barrington — Plans to build affordable housing on the former New England Log Homes site will go forward regardless of whether the Berkshire Co-op Market — or any other large tenant — drops its anchor there.

As the Community Preservation Committee last week hashed through four requests for Community Preservation Act money to fund three affordable housing projects and $20,000 seed money for the town to start an affordable housing trust fund, Tim Geller, Executive Director of Community Development Corporation of South Berkshire (CDC) said at least part of the $40 million 100 Bridge redevelopment project is on schedule despite the public perception that it was threatened by the state’s shutdown of a bio-remediation pilot project at the polluted 8-acre site.

Geller blamed the perception on several news articles that documented the first-of-its-kind bio-remediation project and its ongoing troubles that prompted a shutdown by the Massachusetts Department of Environmental Protection (MassDEP). On at least one occasion, however, Geller said he thought groundbreaking at the site could happen as early as spring 2015; on another occasion, a CDC representative said it would happen in the fall of 2015.

Geller said the site will instead be “capped” to seal off dioxin-contaminated soil, and the method will have no impact on funding or the development schedule, since the affordable housing portion of 100 Bridge “is an entirely independent, self-contained project.”

“From a developers standpoint,” Geller said, “going from bioremediation to capping, the remedy has zero impact on the project. In some ways it makes my life easier.”

The schedule is “determined solely by the funding cycle of the Department of Housing and Community Development,” Geller wrote in a project update for the committee.

The CDC applied to the Community Preservation Committee for $225,000 to move along the $12.7 million total project for 45 affordable housing units, adding to other funding sources and weight to those applications.

The Berkshire Co-op Market has considered the 100 Bridge location for their expansion as the anchor in the larger development that would include not only the housing, but retail, office and open space along the Housatonic River. The Co-op, which Geller says is the “preferred anchor business,” has most recently said that it is keeping its options open and is also looking at other sites for its expansion.

“What if the anchor tenant blows out?” asked committee chair Karen W. Smith, wondering if the entire 100 Bridge development will go forward regardless.

“We’re not building a commercial building without an anchor tenant,” Geller said. “We’re in discussions with another anchor tenant which is actually quite viable. If that were to happen we could move ahead quite quickly.” That information is still under wraps since it is in process, Geller later told The Edge.

Geller also said it was better financially to build the affordable housing units first, since “all the units would be there already.” Fifteen units of market-rate housing are also planned as a separate development and funding piece, with two developers interested, he said. There appears to be a demand for that, too, he added. “People are asking when they will be ready.”

Though he can’t yet say which element of the project will begin first, he is confident, at least about the affordable housing piece. “This project is ready,” he added, noting that most of the permitting was secured.

Geller says this is a needed project. “A net zero [energy] target, will serve a wide range of incomes, will be next to market rate housing, so there will be a mix of incomes. From a smart planning, smart growth and building a healthy community, this hits all the marks — this stands out.”

While such features are more expensive for the developer, utility bills will help the tenants, Geller said. The plan is to create a community garden, gathering area and trails on the 12-acre property, where only one acre will be developed. The project is “far along” with permitting, Geller said, and is now in the design development stage. The units may have tenants as early as August 2017 “in a best case scenario,” he added.

Geller said a financial commitment from the committee will help secure the state’s funding sources for the rest of the $2.8 million development, what he told The Edge is “a beautiful, quintessential, rural small scale project, exactly the kind of project we need more of in South County — small scale family affordable housing.”

The committee also worked through an application from Berkshire Housing Development Corporation (BHDC) and St. James Housing Corporation for $400,000 to buy two acres for the St. James Housing and Open Space Project that will add 31 affordable housing units for the elderly on a slice of land next to the existing Bostwick Gardens, also senior housing run by BHDC. The plan is also to connect the entire housing compound to a multi-use path that borders the Housatonic River, and which will be open for public use.

The property appraisal is not yet complete, however, and BCHD President Elton Ogden told the committee that the $400,000 price tag was quoted by the seller, Dale Culleton. Questions also arose over confusion regarding a conservation restriction. The committee and Ogden planned site visits.

In a letter to the committee, Ogden said that the full $400,000 commitment from the committee would send a signal to state and private funding sources that the $9.7 million project “has the full backing of its community,” and would strengthen all its funding applications for this “much needed housing.”

But BHDC is asking for nearly half of the $800,000 the committee has to dole out this year to all 12 applicants.

When asked by Town Planner Chris Rembold whether there was a way to ensure that affordable housing would go on this land, Ogden said the town could trust his organization. “This is what we’ve done for 40 years,” he said. “We’re not going anywhere.”

Rembold said that while these larger affordable housing projects are important, they take time, too long for struggling homeowners, or those trying to by a first house. Rembold is overseeing the town’s application for $20,000 seed money for an Affordable Housing Trust Fund.

“It’s something the town can use in a number of ways, including helping first time homebuyers and writing down mortgages,” Rembold said. The Town of Lenox, for instance, gives out grants in $5,000 to $10,000 increments. He said even $20,000 could help a couple of families. As the fund grew, it could take applications from organizations like CDC, as well.

Rembold also noted that once a fund is set up, if a larger development project “trips the affordable housing requirement, it has to either build [housing] or contribute to the fund.”

Geller said it was “really smart” for the town. “It makes the town a real player in the game. It’s proactive.”

Committee chair Smith told The Edge that for her, affordable housing was most important of all three CPA categories. “We have lot of service industry that doesn’t pay big bucks, so we need affordable housing for families, and for single mothers with young kids.”

The committee will continue to review applications for funding in two other categories, open space and recreation, and historic preservation, over the next two weeks.