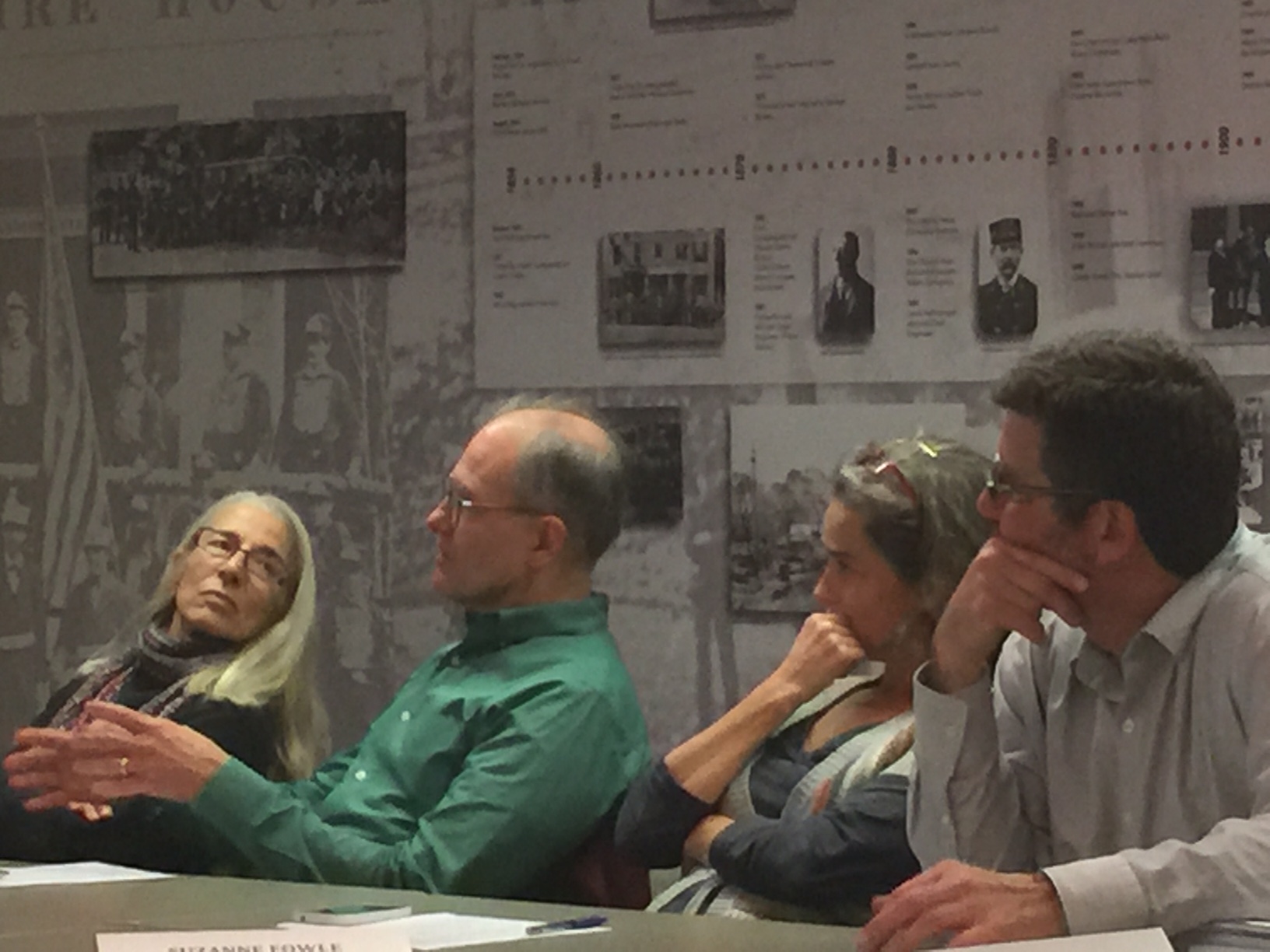 Great Barrington — After a string of marathon meetings in which the Community Preservation Committee struggled with how to divvy up almost $800,000 in Community Preservation Act money for what it said were valuable projects asking for a total of $1.4 million, the Committee last night (November 19) whittled its way down to that $800,000 mark, with a some projects being tossed — at least for this year — and a reduction in funding for some others.

All members were present except Kathleen Jackson.

Ultimately, after each member’s reasoning, mostly using the measure of priority of needs for the town, the committee voted to fund two large affordable housing projects, one for Construct Inc., for 11 units on State Road, and for Community Development Corporation of Southern Berkshire’s plan for 45 units on the former New England Log Homes site on Bridge Street.

Community Health Programs (CHP) will get money to build walking trails behind its Stockbridge Road medical and administrative headquarters; Great Barrington Land Trust for restorations to the Housatonic Riverwalk; the Berkshire Natural Resources Council for agricultural preservation of the Windy Hill orchard land; the Unitarian Universalist Meeting of South Berkshire for repairs to their Housatonic building; the Great Barrington Historical Society for electrical issues; and the Historical Commission for preservation inventory work. All projects will have to be approved by residents at Annual Town Meeting in May.

Out of the game are the St. James Place bell tower rehab; the Trustees of Reservations for a trail in Housatonic Village; the Parks Commission public bathroom and ADA accessibility at Memorial Field; the town’s request to start an Affordable Housing Trust Fund; and St. James Community Housing’s purchase of land for additional senior housing and open space next to Bostwick Gardens.

The reason for these eliminations had mostly to do with greatest immediate need, given what the committee had to work with. For the Trustees and St. James Housing the issue had more to do with readiness and clarity about costs. All applicants were invited to try again next year. For the most part committee members ultimately agreed that both a housing fund and public bathrooms could and should be taken up by town boards, seeded or paid for in other ways.

The decision-making process about the housing fund was typical of the kind of dialogue that dominated committee meetings:

“I don’t like the idea of the town being in the housing business,” said committee member Tom Blauvelt.

“It will be kicked down road if we don’t do it now,” Bill Nappo said.

“It’s important,” Ed Abrahams said. “But it’s at bottom of our list and we need to cut something.”

In this second year of project funding, after the town voted in 2012 to create a CPA fund through a small surcharge on real estate taxes matched in part by the state, it is still learning to glimpse the pitfalls ahead. One is “soft” commitments for funding such as that made last year to the Community Development Corporation of Southern Berkshire for $250,000 in this funding cycle for affordable housing. The CDC last year was granted $500,000 for two other aspects of its 100 Bridge development, with the soft commitment added on. Some committee members wanted to reduce this year’s $250,000 given all the other needs, but the dominating feeling among members was that the committee should honor its commitments, particularly for affordable housing, which it says is a priority.

Chair Karen W. Smith said she felt strongly the project should be fully funded, but in future, no more promises should be made ahead. “I will do that again over my dead body,” Smith said. “We need to honor it [this year] and get it over with.”

And one cannot swing a cat in town lately without hitting a controversy. The meeting ended on such a note, the final sound being Chair Smith’s hand smacking the table as she put an end to a discussion that she indicated was heading nowhere fast. Problem: Housatonic resident Michelle Loubert’s complaint that using public money to fix up the Unitarian church building constitutes a separation of church and state violation.

“I am offended as a citizen,” Loubert said of the $60,000 the committee recommends be granted to the Unitarian project.

Smith was prepared, since Loubert had circulated a letter, reproduced below, prior to the meeting. Smith said the matter of CPA funding and religious buildings had already been vetted by the state’s CPA oversight agency, and town counsel puts its magnifying glass on all town bylaws before they get final approval by the Attorney General’s Office. Loubert’s individual complaint, however, had not been brought to town counsel, Smith said.

There was some back and forth between committee member Suzie Fowle and Loubert. Fowle said as an atheist, she had no problem with the Unitarian mission statement. In a previous meeting Fowle, also a Housatonic resident, said that the Unitarian’s building was an important village resource for meetings and other events.

But Loubert said none of this mattered. What was important, she said, was that this was a “house of worship…with an active congregation.”

Fowle tried to reply, but Smith’s hand came down. The meeting was over. 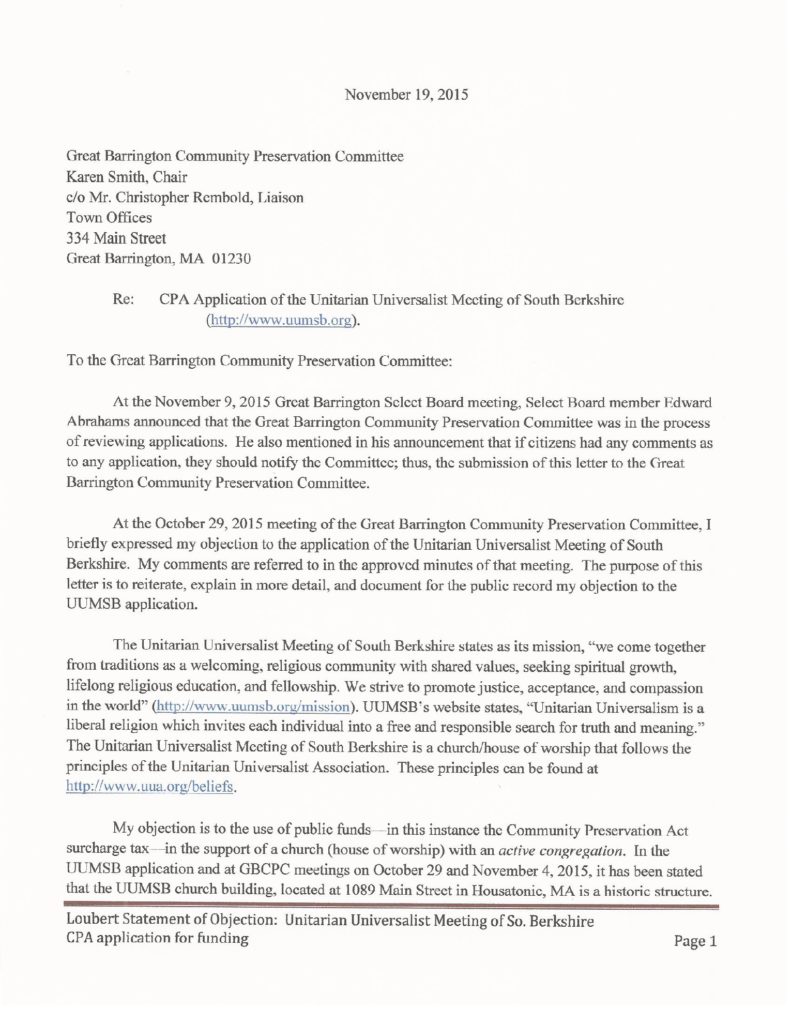 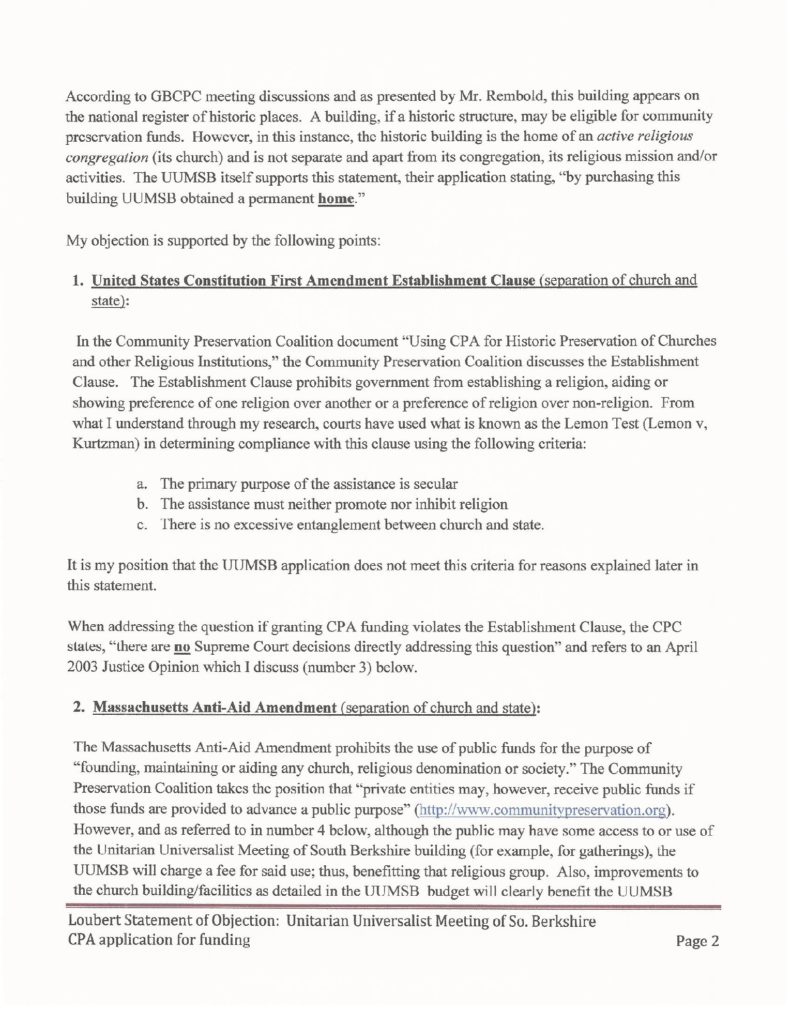 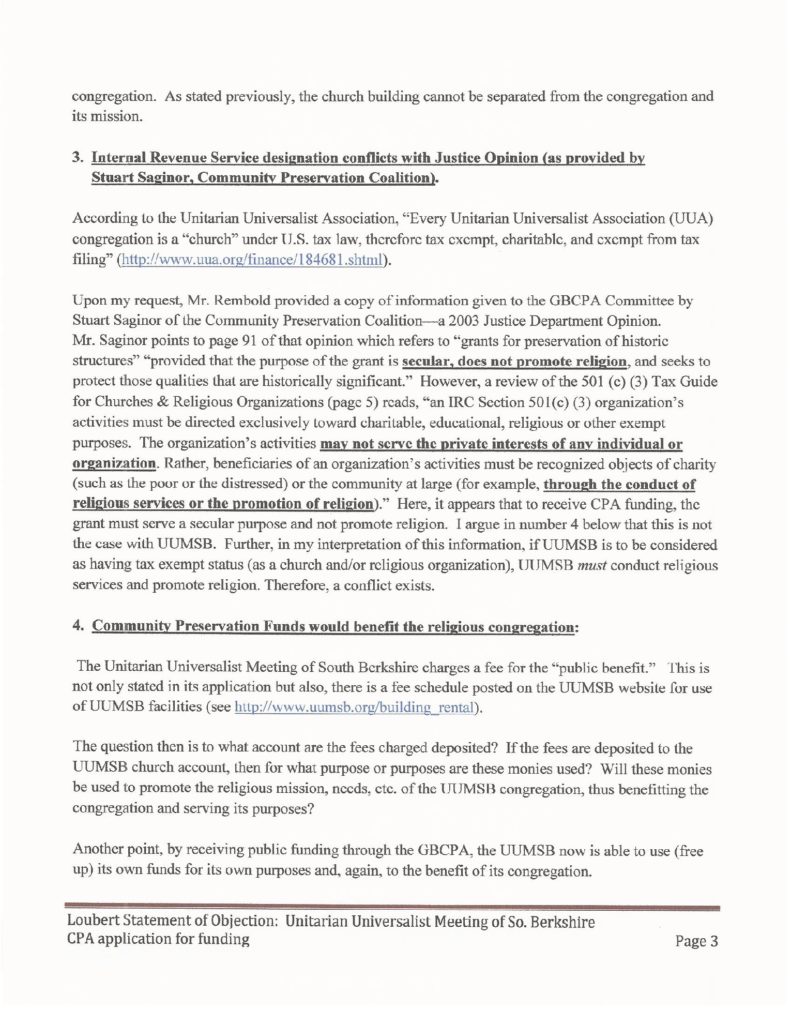 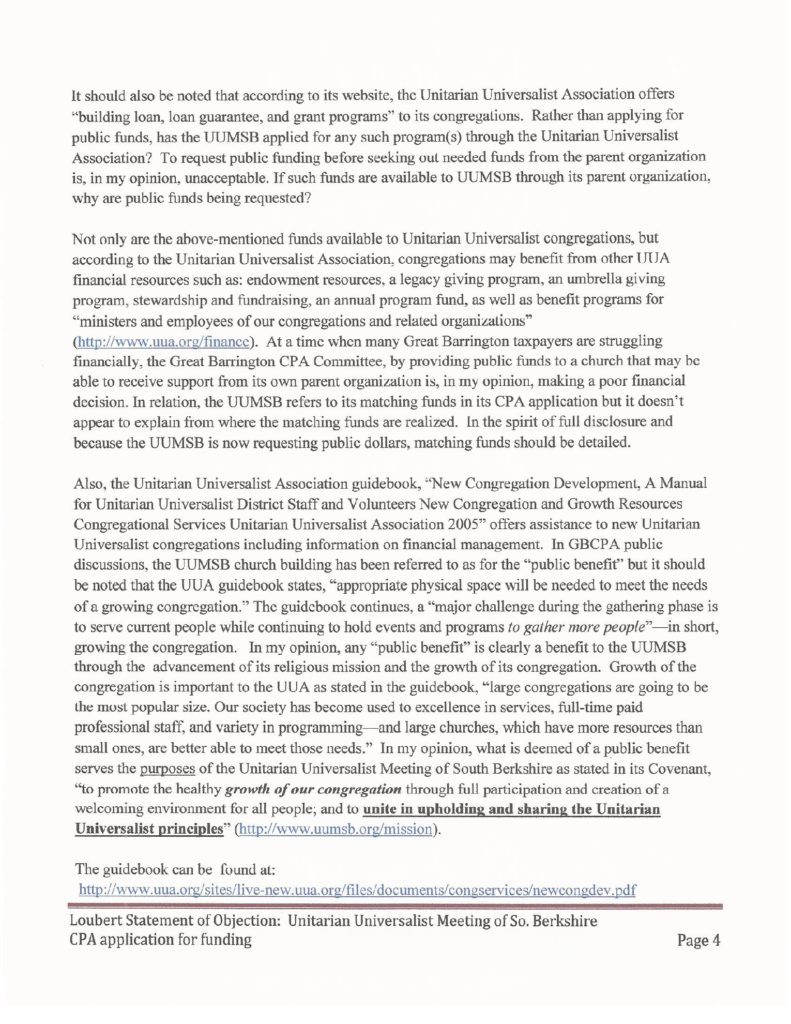 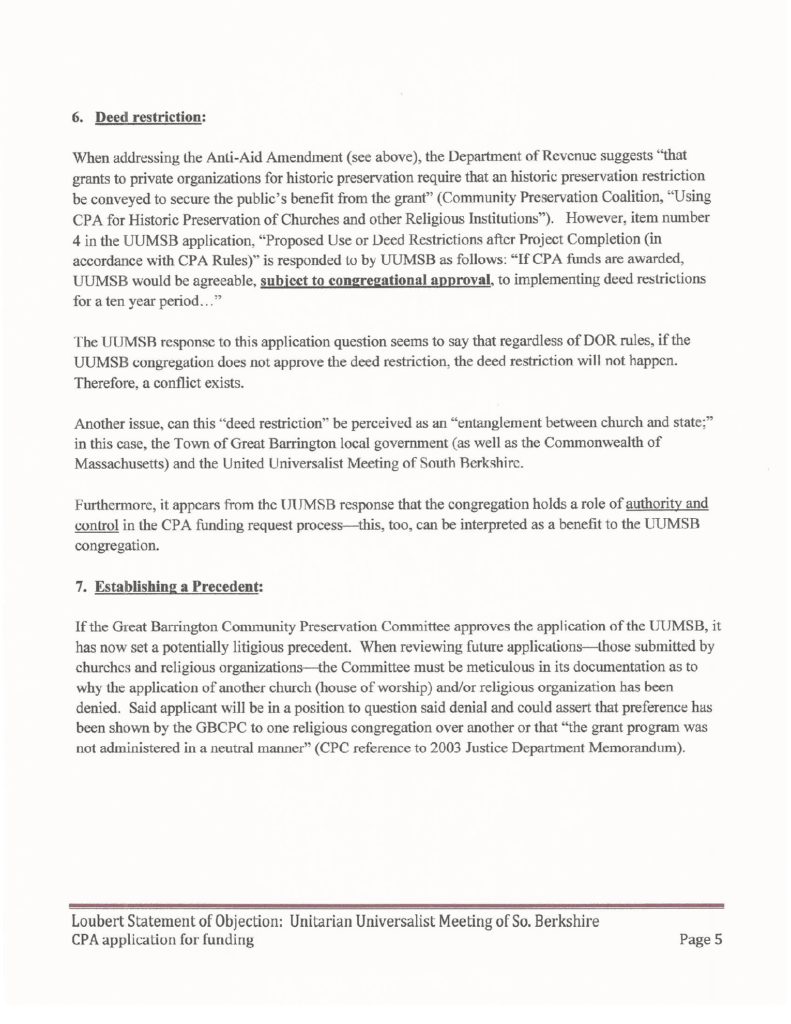 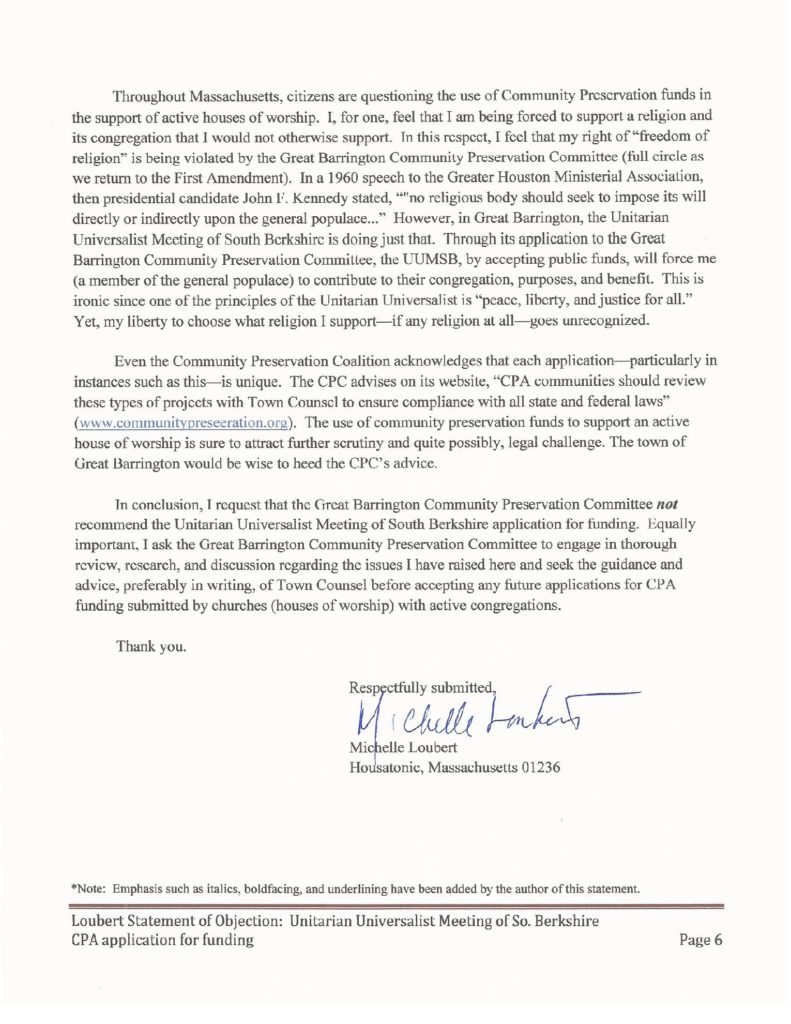