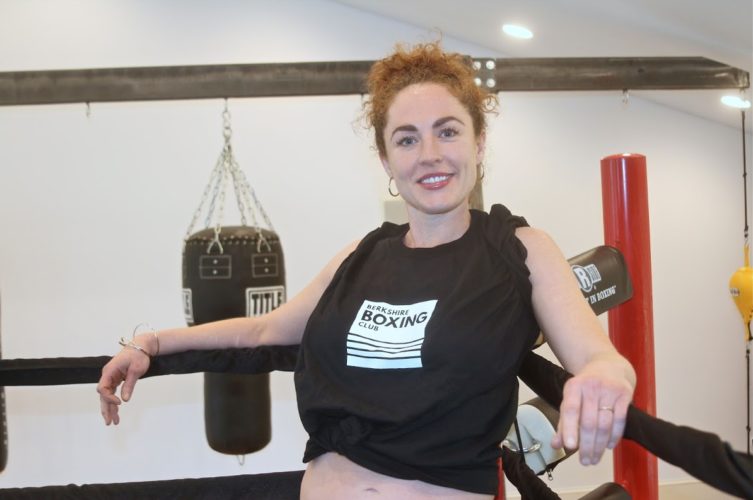 Genève Brossard of Berkshire Boxing Club thinks that some of the virtual classes she started during the pandemic will become a staple once the studio reopens. Photo: Emily Thurlow

Berkshire County — Like many businesses throughout the commonwealth, several Berkshire-based fitness centers and health clubs have turned to the internet in an effort to provide services to clientele during the state-ordered, stay-at-home advisory as a result of COVID-19. While the shift has allowed gym owners to provide resources and connections to their members, much like the coronavirus itself, uncertainty continues to lurk.

Fitness facilities were closed shortly after Gov. Charlie Baker declared a state of emergency in March as they were not deemed “essential” businesses. Though the statewide closure was enacted as a means to stop the spread of the coronavirus, some unintended consequences have included a heavy financial impact to businesses. Though the effects vary from company to company, the closure of Soules Sports & Fitness in Lee has had an estimated loss of somewhere near $40,000, according to owner Justin Soules.

“We just got to a place where [financially] we’re pretty solid and now I feel like we’re back at day one opening. The impact, it has been detrimental … it’s huge,” said Soules. “If this were to go on for another two months, I don’t think we’d be able to survive it.”

Soules opened his gym at 925 Pleasant St. roughly four years ago. Growing up in the Berkshires, he participated in a number of organized sports and trained regularly. The challenge the Lee native found, however, was that there was no place to work out.

After graduating from Lee High School in 2006, Soules went on to study exercise science at Berkshire Community College and fell in love with the field. He took that passion to open a gym in his hometown and has amassed around 200 members. The gym’s core is focused on group fitness, something that’s been frowned upon in the era of COVID-19.

Soules is the only full-time employee at his gym, but said he just takes a draw for the business. He has five trainers and five instructors who are on his payroll. The way his business is structured, he said, has made Soules Sports & Fitness ineligible for financial assistance from the Small Business Administration or the Paycheck Protection Program during the pandemic. Soules was able to have his business loan deferred, but “deferred” does not mean “disappear,” said Soules.

“It’s not a problem right now, but that doesn’t mean it goes away,” he said, noting that he also has a mortgage on his house to keep paying. “We’re not a huge franchise. It really is a huge hit, because even when we open, there will be people that won’t come back … we do a lot with seniors and I’m guessing they won’t be running back to the gym.”

Rolling with the punches

Soules has offered nearly 30 different classes that range from spin classes and boot camps to various fitness classes like kettlebells, bodyweight and circuit training. The facility has also rented some of its equipment like spin bikes, kettlebells and hand weights to its members, which supplies a trickle into Soules’ revenue stream.

The demand for exercise hasn’t wavered while people have been stuck indoors. Soules and his trainers and instructors have taken to leading virtual workouts via Zoom and Facebook Live. In between teaching virtual classes, Soules says he’s been spending a lot more time with his wife, Ashley, and sons Sylas and Styles.

“Being home with them, it’s exciting,” said Soules. “That’s been the blessing in all this.”

Genève Brossard of Berkshire Boxing Club has also been balancing her time at home between her family, continuing to teach art classes at Berkshire Waldorf High School in Stockbridge and filming virtual classes from the guest bedroom of her home in Mount Washington.

The club celebrated its one-year anniversary in April while it has been closed. Prior to that, Brossard was floating her boxing program from location to location, with programming consisting of non-contact fitness to competition.

Since opening the doors to the Great Barrington club last year, Brossard had accumulated 60 members. Prior to the temporary closure, the studio was able to diversify its fitness offerings. As such, Brossard said she thinks that some of the virtual classes will become a staple once the studio reopens .

With boxing being a contact sport and close contact being cut off, having diversified conditioning and training was really important to maintain, said Brossard. Throughout the closure, Berkshire Boxing Club has offered free workouts on YouTube, including bodyweight conditioning and high-interval training.

In the future, Brossard said she’ll consider monetizing workouts once she feels satisfied with the production quality and value as a new revenue stream for the business.

“We’ve had to look at our way forward from a few angles. I think gyms and other fitness routines are able to translate well on the web, both live and through recorded classes. I think the web can be really successful for yoga, for example, and weightlifting, but boxing, it’s a contact sport. Training for it requires being there … it’s important that I’m there with them,” she said. “I’ve been really thinking about how to offer the best thing possible and how we can make something meaningful that people can follow online.”

While boxing is usually a solo sport, the idea of boxing classes is a newer concept, she added.

Including Brossard, Berkshire Boxing Club has 12 staff members. The club was very fortunate to receive funding from the Paycheck Protection Program, she said.

Virtual classes were a foreign concept to Ari Zorn of Zorn Core Fitness studio prior to the stay-at-home advisory, but now, Zorn said the videos almost feel “second nature.” Though most of his clients are older, he said that many have adapted under the circumstances.

“Some of them have gone to Zoom and some of that is a testament to myself and the good relationships. I feel really lucky that I knew how to adapt,” he said. “When you look at how other people are suffering, it puts my situation into perspective: I’m not being kicked out or evicted. I don’t have someone dying from this. I don’t have a kid forced to go to work and exposed to being sick. I’ve been very fortunate.”

Zorn opened his gym in South Egremont in 2007. He’s been in the personal training business for roughly 13 years. Initially, he worked with clients outside at Jug End State Reservation & Wildlife Management Area.

Zorn said he’s also found the silver lining to his studio closing: time with his wife and three children. Amid challenges with connectivity with peak times on Zoom and multiple people utilizing the service and fear of COVID-19, Zorn said that his family is especially close.

“I’ve never felt so proud of my family. Despite being cooped up, we do not fight. We communicate. We take space when we need space,” he said.

Still, Zorn was disappointed when gyms were not classified as “essential” businesses by Baker in March.

According to the Centers for Disease Control and Prevention, physical activity can provide benefits of thinking or cognition for children 6 to 13 years of age and reduced short-term feelings of anxiety for adults.

Regular physical activity can help keep thinking, learning and judgment skills sharp as someone ages, and also reduce the risk of depression and anxiety and help a person sleep better.

Many of Zorn’s clients have health conditions that are improved by his services, he said. Much of his services are provided one-on-one in his studio.

“Working out is like therapy,” said Zorn. “How it’s not essential … it just blows my mind.”

“Research says people that exercise more are healthier and get sick less,” he said. “It seems backwards to me.”

Although reopening is now on the horizon as Baker announced a multi-phase strategy, gyms like Soules’ aren’t slated for an official reopening until Phase Three. At the earliest, that could be Monday, June 29.

“When we open, depending on when that is,” said Soules in an interview prior to Baker’s announcement, “it may almost not be worth the opening. I’m worried that it may cost more to operate than I would be getting in. It doesn’t make sense to hemorrhage money.”

As a smaller facility, class sizes will likely be limited to five people. For the time being, that will be doable, but in the long term, the business won’t be able to sustain that, he said.

Still, Soules said he is optimistic that his community will continue supporting him and patronizing his business. He is also considering establishing a pandemic liability form.

“I just think that when people have to sign something, they put a little more thought into it. When we ask them to read the paper and read what it says, it puts more responsibility on everybody,” he said. “If it’s what we need to get over this hurdle, then we can do it. We will get through this.”

Unlike businesses like restaurants, Brossard said she won’t need to rebuy supplies to reopen her business.

“The overhead is stable and we’ve also been insanely cleaning,” she said. “We just need to reopen.”

Because boxing is such an intimate sport, Brossard said she’s looking into ways to maintain that while still adapting to higher safety standards. Berkshire Boxing Club is also following the recommendations and survival guide released by USA Boxing that was developed to help club owners sort through such an unprecedented time.

Though classes were on the smaller side with never more than 12 people to begin with, Brossard said she’s not worried about limiting class sizes. Berkshire Boxing Club will be screening people as they enter the facility. With one-on-one training, Brossard traditionally holds mitts for members, but may reconsider when the club reopens, at least for the time being.

“I’m used to being right next to the person. With it being such an intimate sport, we want to figure how to not lose that while staying safe,” she said. “We’re rolling with the punches.”