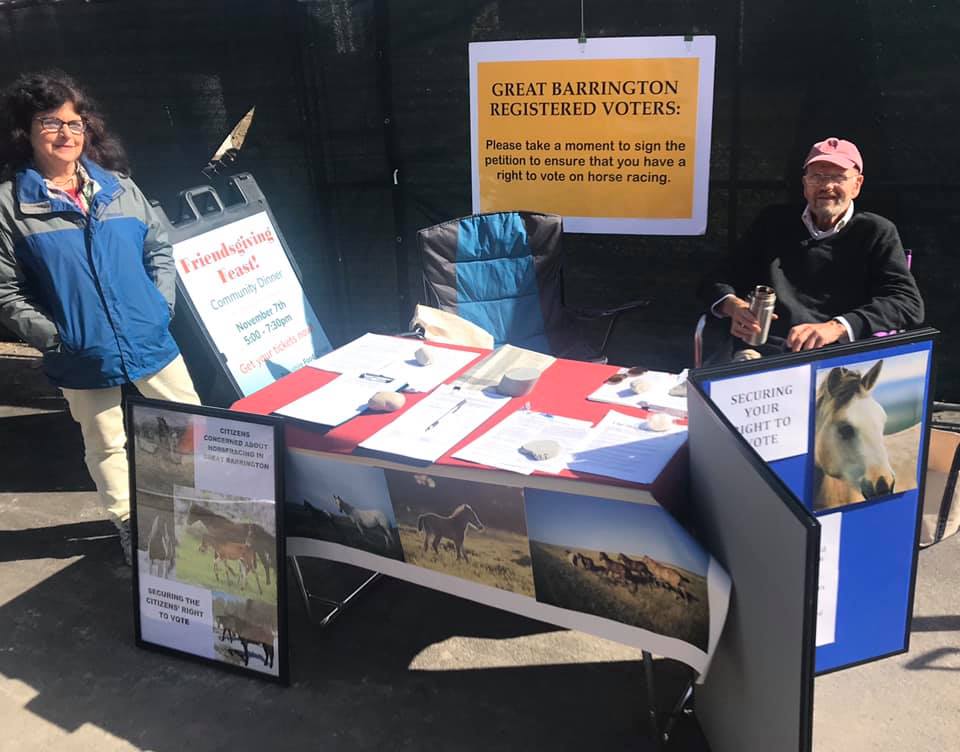 Meanwhile, allies of a selectboard member who first brought the issue of home rule on horse racing into the public consciousness are raising serious questions about some proposed changes in policy on board communications and the rights of residents to be heard during the public comment period at selectboard meetings.

Citizens Concerned About GB Horseracing, a Facebook group formed earlier this year to share concerns about the return of horse racing to the fairgrounds, announced on Nov. 1 that it had filed the petition at Town Hall with 471 signatures, well more than the required 200, to force a special town meeting:

“The next step will be to inform all GB voters the date of the Special Town Meeting, so citizens can come out and officially vote on sending the Home Rule Petition to the legislature to ensure that no Horseracing come to GB without town meeting approval. The date will be announced within the month.”

The group began circulating the petition a little more than two weeks ago, in part by setting up tables on Saturday mornings at the Berkshire Food Co-op and at the Great Barrington Farmers’ Market. The group has researched the topic of horse racing in the state and has produced a sourced fact sheet about it. Click here to view the fact sheet and here to view the suggested “action steps” for Great Barrington residents.

“We are so grateful to everyone who signed and to the dozens of people who circulated the petition, demonstrating their demand for the right to vote on horse racing in Great Barrington,” Concerned Citizens organizer Pam Youngquist told The Edge.

The move to start a petition came shortly after state Sen. Adam Hinds, D-Pittsfield, who had co-sponsored a bill that would have allowed Sterling Suffolk Racecourse to restart racing in Great Barrington for a few weeks in the fall, withdrew his sponsorship of Senate Bill 101.

After a failed attempt at partnering with a major casino operator, Sterling Suffolk sold the now-closed Suffolk Downs thoroughbred race track in East Boston to developers in 2017 for $155 million. The track held its last races in May of this year.

Sterling Suffolk Racecourse has reached a lease agreement with fairgrounds owners Bart and Janet Elsbach to bring thoroughbred racing back to Great Barrington for up to 40 days in the months of September and October with the goal of starting in 2020. The company expects to spend between $15 million and $20 million on the project.

But in order to accomplish that feat, Suffolk needs a change in state law to permit it to hold races in Great Barrington while at the same time allowing it to maintain its simulcasting and remote betting operations back in East Boston. That’s one of the reasons for the proposed legislation, which has been referred to the Joint Committee on Consumer Protection and Professional Licensure and is still pending on Beacon Hill even without Hinds’ sponsorship.

Since Great Barrington’s permanent horse racing license was granted in 1998, the last year of horse racing in the town, a townwide referendum would not be necessary for Sterling Suffolk to operate in the fairgrounds, causing concerns among town officials that Suffolk chose Great Barrington precisely because the bill, if passed, would make horse racing much more difficult for residents to stop. The project would require as many as three special permits from the town.

The topic has generated a slew of letters to the editor of The Edge, all in opposition to horse racing and mostly on the grounds of animal cruelty. Here’s a sampling:

Selectboard Chairman Steve Bannon told The Edge the board will likely set a date for the special town meeting at its next meeting Wednesday, Nov. 13. The law requires the board to set a date within 45 days of receiving the petition. Voters will be asked whether they want to send the home-rule petition to the state legislature in Boston.

Selectboard member Leigh Davis first raised the issue at a board meeting on July 22, not long after learning through media reports that the town was not represented at a public hearing on the bills in Boston on July 1 before the Joint Committee on Consumer Protection and Professional Licensure. After asking in advance that the item be put on the agenda, as selectboard members are entitled to do, Davis raised a series of questions about the lack of local control.

On the agenda for the selectboard’s regular meeting last night was the consideration of a draft of the board’s policies and procedures. There were a few proposed changes to those policies and procedures that some observers think were aimed at preventing Davis and other selectboard members from placing items on the agenda without a majority vote of the five-member board or from discussing them on social media. The policy on agenda items has since been stricken from the draft.

Davis declined to comment and said she would address the subject at the board’s next meeting. But Edge contributor and regional radio chief Alan Chartock defended Davis, whom he labeled “a hero in this story,” in his Nov. 2 column. Indeed, Chartock cast doubt on the motives of her fellow board members in proposing the changes.

“The whole thing comes down to an attempt to silence the independent voice of Leigh Davis, who has been right on the money,” Chartock wrote. “This is a maneuver reminiscent of something that Donald Trump might do in contravention of democratic principles.”

Nothing could be further from the truth, said Bannon. The item, he said, was simply up for discussion and turned out to be a “bad idea.”

“Some people took it personally and thought it was trying to stifle debate,” Bannon said. And so the idea was scratched.

Another item would insist that selectboard members “refrain from commenting outside of a Board meeting on matters which are pending before the Board or which are to be scheduled to come before the Board as part of a public hearing process. This includes comments on any form of social media … ”.

Bannon said that policy was not an attempt to stifle the free speech of board members but rather a precaution designed to protect the town from liability. A board member’s opinion made in advance of a public hearing could be construed as actionable bias.

Furthermore, as is the case with email communication (click here for a recent example in southern Berkshire County), a board member’s comments on social media, if other board members read or respond to them, could constitute a violation of the open meeting law prohibiting deliberations outside a publicly noticed meeting, Bannon explained.

Bannon said both of those policies and their enforcement originated from town counsel David Doneski of KP Law, which has advice on social media policy and the open meeting law posted on the firm’s website.

Another proposed revision to the selectboard policies and procedures concerns what audience members are allowed to address during public comment, known in Great Barrington Town Hall as “citizen speak”:

“Citizen Speak time shall not be used for comments or questions regarding a matter which is pending before or will be scheduled to come before the Selectboard as part of a public hearing.”

Bannon again said it was a recommendation of town counsel because such comments on a pending matter that will come before the board in the form of a public hearing, “could bias the selectboard and the applicant isn’t there to respond.”

These proposed revisions will once again be on the agenda for the selectboard’s Wednesday, Nov. 13, meeting, which has been rescheduled from Nov. 4. That earlier meeting had to be canceled because of a downtown power failure.