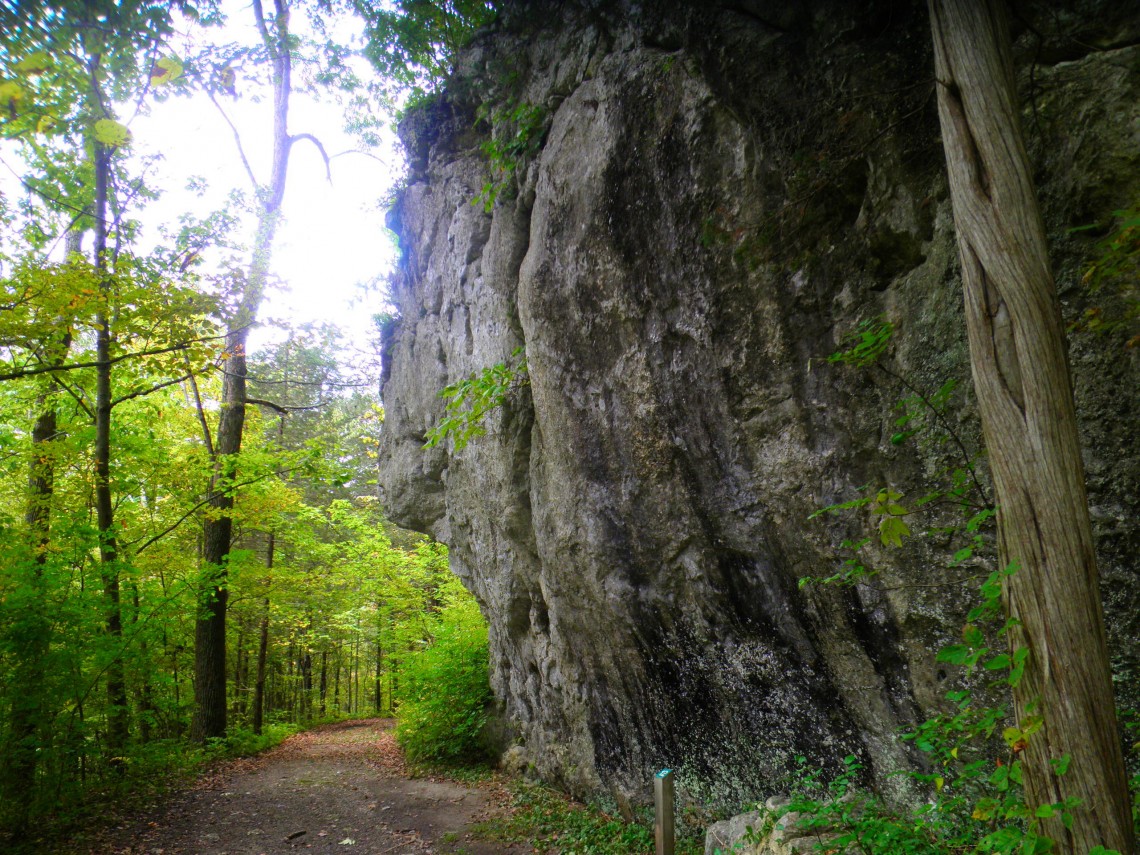 After a month in which our family unit had been separated by summer camp, travel, work, and sundry obligations, my wife Rachel, son Eliot, and I finally had a clear Sunday afternoon for an outing together. We chose Bartholomew’s Cobble in Sheffield, one of the Trustees of Reservations sites here in the Berkshires that we had never visited.

We read that the 329-acre preserve has five miles of trails through woods and wetlands, plus a moderate hike up a hill that promised a panoramic view of the Housatonic River Valley. Sounded great. Yet when we arrived on a lovely summer day, we found that we had the entire place to ourselves – literally. We were the only ones there. After four years of living in these hills, I know a lot of locals with families, and I rarely – like count on the fingers of one hand rarely – encounter anyone I know in these underutilized pockets of paradise. I have never been able to figure out why. What could they possibly be doing that’s better?

The ranger at the Cobble’s visitor center was a chatty, clearly very lonely fellow who kept us talking for about 15 minutes about the trails, the family membership plans, the historical artifacts and taxidermied fauna on display, and so forth. As we finally tore ourselves away to start off for the trailhead, he asked if we had bug spray. We did. Rachel had packed some.

So we’re about 10 minutes out, walking along the riverbank, when the mosquitoes started to swarm. Time for the insect repellent. I reached inside the daypack and pulled out the bottle. I didn’t even bother to say “Rachie, Rachie – what were you thinking?” when I realized she had brought only…the organic bug spray.

The three of us sprayed copious amounts of the stuff over our limbs, our clothes, our hats, our faces, and our ears, and then kept walking. The mosquitoes, however, stayed on the offensive. Keep in mind that at this point, we were the only diurnal mammalian food source available to the bloodsucking horde within a 329-acre expanse of land, and they descended upon us with the voraciousness of cowboys on a cattle drive greeting the chuck wagon. The organic insect repellent did not seem to be doing a damned thing.

After 10 minutes of swatting at mosquitoes, Eliot started to count the angry red welts that had been raised on his body and mine. There were a lot. With no other options, I applied more of the organic spray, the mosquitoes savaging me as I stopped walking to do so. I looked at the label. In big letters it read “SAFE Around Children & Pets. NON-TOXIC.” I would add “SAFE Around Mosquitoes & Ticks,” because it clearly did nothing to harm or disturb them. The label also proclaimed that the product is “DEET FREE!” – like that is a good thing. It might as well read “DOESN’T WORK! GOT IT?” Okay, I got it, DEET-free and non-toxic. But with bug spray, isn’t a little “toxic” wholly in order. I mean, all three of us have our ten fingers and ten toes, and the child stopped breastfeeding eight years ago. Maybe we can tolerate a little FDA approved “toxic” if it keeps the bugs off us.

I read the label to see what this organic concoction did contain. Rosemary oil. Lemongrass oil. Cinnamon oil. And I’m thinking – this isn’t insect repellent, this is salad dressing. The one other ingredient listed was geranoil, which must be the scientific term for rice wine vinegar because basically these are the same ingredients that are in Annie’s Organic Asian Sesame Dressing.

But what really irked me about the label was the photo of the contented family of three smiling out at me as if to mock the red welts arisen on my face. Maybe those smug scrubbed faces make some people more comfortable about purchasing the product – “We can be happy and eco-consciously free of swarming insects like them!” –  but as for myself, I like my anti-insect products to be advertised as they were in the old Raid commercials, in which grubby cartoon vermin look despairingly out at the camera at the moment they realize they’re about to be killed by a deadly poison – a satisfying instant for you to think “up yours, bugs!” – before BOOM, they all explode.

So we kept walking. The insect repellent vinaigrette also seemed to work well as a marinade, as the mosquitoes were finding both Eliot and me exceptionally delicious. They didn’t seem to be bothering Rachel, though – she’s 5 foot tall and so perhaps too small for the mosquitoes to spot, or perhaps they’re just expressing their gratitude to her for having brought useless organic bug spray into the woods, along with a plump, slow-moving full course banquet (me) and a rather more sprightly dessert tray (Eliot) for them to feast on. Not slowed as Eliot and I were by slapping at ravenous bloodsuckers while scratching and cursing, Rachel traipsed through the woods 20 yards ahead of us going: “Oh, look at that tree! Oh, look at that rock formation!”

As I do in times of travail, I attempted to use the experience of suffering to impart a life lesson to my son. In this case, I thought I might even be able to teach him a little something about husbanding. We have a long walk still ahead, I explained, and so to get through it with grace, we just have to pretend. I said: “Pretend we aren’t being attacked by bugs. Pretend we aren’t itchy. Pretend we aren’t angry at Mommy for bringing only the useless bug spray.”

“But we are!” Eliot protested. 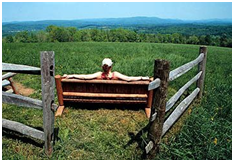 We left the bugs behind when we got out of the woods and into a 20-acre meadow leading to the top of Hurlburt’s Hill. We ascended, and a vista of hills and valleys opened up for us. At long last, we parked ourselves on the bench overlooking it all. Glorious. Amazing. Wondrous. Words fail, actually.

And yet, in our whole time out there, we never encountered another soul. Why, I sat there wondering, don’t more people get out to places like this?