Bernard Drew
Town halls in Great Barrington, at left, and in New Milford, Connecticut, side by side, show their twinness. Great Barrington's portico is the original high-style Victorian; theirs is Neo-Georgian.

With Great Barrington’s Town Hall in the midst of a spiffing, it may be instructive to evaluate how the building has coped and changed over the years. For comparison, we have its identical mate — you know, don’t you, the Roger Sherman Hall 48 miles from here in New Milford, Conn., is identical?

The Milfy version may have opened slightly before GBee’s, as published town histories date it from 1875, whereas ours opened officially New Year’s Day 1876.

Day-tripping recently provided opportunity to chase a little history of the southern compatriot at that village’s library. Published histories say their building was designed by “C.S. Roberts.” I couldn’t find a word about this man in the usual sources. Fortunately, Great Barrington got his name correct: “E.L. Roberts.”

Ebenezer L. Roberts (1825-1890) was an accomplished architect. He lived in Brooklyn and had an office in Manhattan. “He designed the Standard Oil Company’s Building on Broadway, the Ninth National Bank, the Baptist Church of the Epiphany, on Madison Avenue, St. Paul’s Methodist Church, on Fourth Avenue, the Phoenix Insurance Company’s Building in Brooklyn, and many other important structures in their sister cities,” according to American Architect and Building News for March 22, 1890.

Details of how the towns came to purchase Roberts’ services are beyond the scope of this brief survey, but Roberts may have been drawn to New Milford first as he was a Connecticut native. 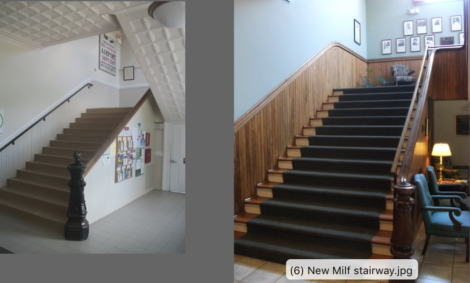 Town hall front stairs are virtually identical, with GBee’s painted white (at left), Milfy’s in wood. The newel posts are different: One is iron, the other wood. Photo: Bernard Drew

The Colonial Revival buildings mirror each other, but are flopped. Because of the streetscapes, ours has a side entrance onto Castle Street, which enters the Berkshire South Registry of Deeds. New Milford’s fronts Church Street on the opposite side, though that door has been bricked over.

The photos tell the story.

Both halls house or did house courts. 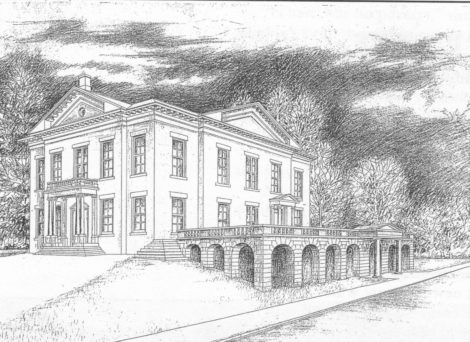 Great Barrington rejected an architect’s suggestion in 1995 for a new police addition.

Both had open rooms on the second floor. Great Barrington’s was used for high school basketball games until the Coach Alphonso Gymnasium was put up. The floor was boxed off into offices in 1960.

Both town halls have bandstands nearby.

Both towns several years ago needed a new police station. New Milford acted first, putting up an annex in 1965. This also solved the problem of building accessibility, as the addition has an elevator. 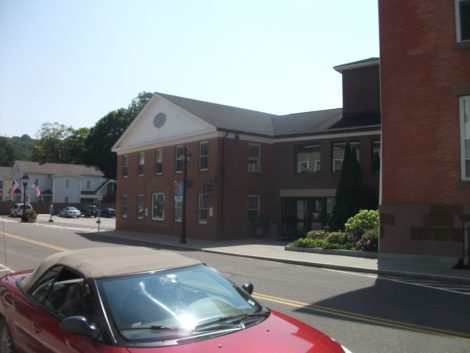 New Milford solved its police station and accessibility needs with an extension onto the rear. Photo: Bernard Drew

Great Barrington kept its officers confined to the town hall basement until two decades later. Great Barrington Selectmen in 1995 briefly entertained a notion suggested by an architectural consultant to build a patio/archway/below-level police station on the building’s north side. Not a winner. The uniformed branch was moved to a retrofitted building on South Main Street.

On accessibility, an answer was found in Great Barrington with construction of an interior elevator in 1995 with fire stairs in a brick stack on the rear. The rear was long a bone of contention in Great Barrington. What a howl was heard in 1905, when a steel fire escape was bolted to the building’s back side. “The town hall building is now, in its exterior, a secondary structure as compared with its fire escape on its west end,” a writer in The Berkshire Courier moaned in a story, “Frightful Fright!” (Dec. 7, 1905.) 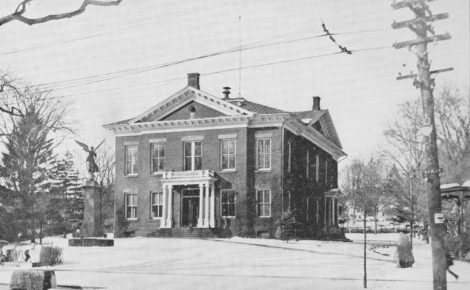 I’m a past chairman of the town’s Historic District Commission, and in that role back in 1994 I took a top-to-bottom tour of our hall with custodian Arthur Wright to show New Milford Town Council member Frank Wargo and historian Joseph Lewis what our building was like. 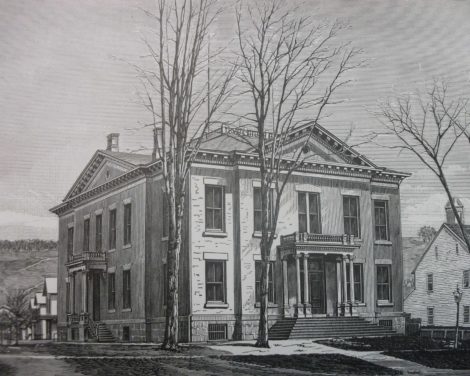 (Image from History of New Milford) New Milford’s municipal office as it was built, with its first portico and an entrance door on the left.

They have identical first-floor stairways, though New Milford has indoor access to its larger and usable basement. Great Barrington’s basement is only reached from the outside.

Both buildings were built with high-style Victorian porticos. Ours still has one. New Milford’s was changed to a Neo-Georgian in 1960.