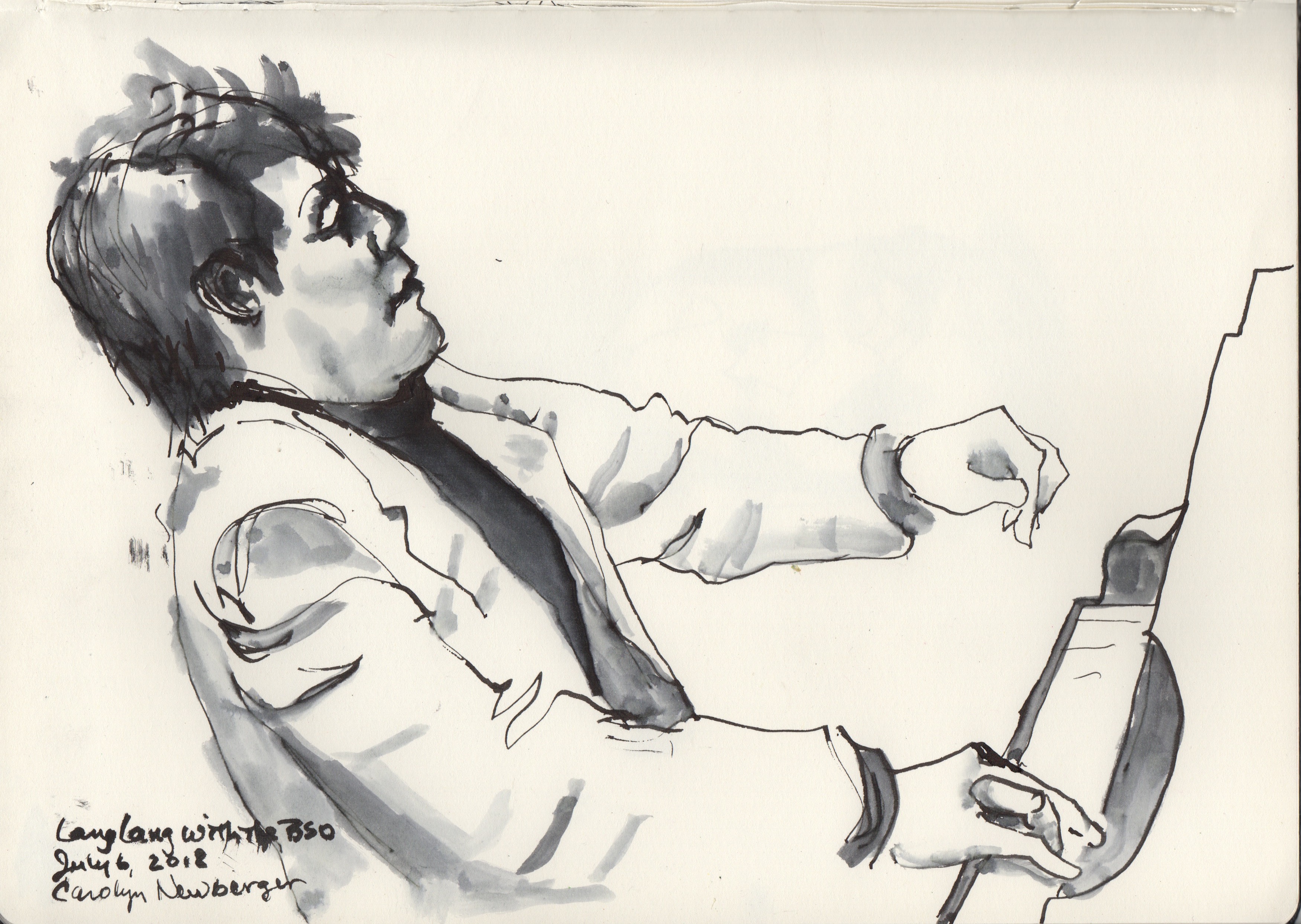 First, on Friday, July 6, 2018, when Lang Lang made his spectacular return to public performance, and then on Sunday, July 8, when Rudolf Buchbinder made his Tanglewood orchestral debut, sublime and quiet pianistic expression under Andris Nelsons’ supple baton and bare hands transformed the Tanglewood Shed.

Each virtuoso brought distinctive style and manner to sturdy staples of the concert repertory, respectively Mozart’s piano concerto No. 24 in C minor, and the Brahms piano concerto No. 1 in D minor, and pulled from the Boston Symphony Orchestra exquisite and heartfelt responses. Their juxtaposition two nights apart gave these reviewers a splendid opportunity to consider and compare essential elements of world-class pianism.

To every phrase, Lang Lang brought a revelatory, exquisite cantabile. The arc of every line seemed like a song in itself, and each note glistened with love and care.

Lang Lang projected a sense of mightily controlled power, superbly subordinated to subtle expressivity. From the center of the hall, his volume seemed never to rise above mezzo forte. Nor did it need to.

Buchbinder’s Brahms required more volume, notwithstanding Nelson’s efforts to keep his orchestra from overpowering him. In the end, these imbalances were immaterial. One listened harder, gratified by the stream of dynamic nuances and Buchbinder’s acute sensitivity to the voices of the orchestra.

Lang Lang has been criticized for “showy or mannered” gestures, as the New York Times critic, Michael Cooper put it in his July 7 preview of this concert, “Why Lang Lang’s Return is a Big Deal for Classical Music.”

In this performance, Lang Lang’s bodily engagement with the music was spellbinding. During the Mozart, he frequently gazed lovingly at the woodwinds. When one hand was not in use, he gently conducted to himself with the other, seemingly rhapsodized.

Striking an accented, unadorned, sustained left-hand G one and a half octaves below middle C, he struck the note suddenly, withdrawing the hand, holding it high and letting the loud pedal do its work. The effect was stunning, as if he were saying,

“What an honor to sit back and to admire this wonderful music and the splendid instrument that expresses it!”

Buchbinder, whose refined taste, mature comprehension of the European canon and precise technique have drawn wide praise, evidently saw no need for gestural grandiloquence. When a phrase ended, he just dropped his hands. As he, too, gave appreciative glances toward members of the orchestra in the course of Brahms’s many interesting conversations between soloist and section voices — so eloquently articulated by Nelsons and his band — it was less a love affair than a proud, shared affinity for the transcendent artistic legacy.

Although each man is justly celebrated as a master of the instrument, Lang Lang’s pedaling seemed especially devoted to the service of bringing out individual lines and, indeed, to eschewing dissonance.

By contrast, Buchbinder was comfortable with occasional and intentional harmonic blurring. His right foot and the loud pedal were unashamedly glued to one another through the performance.

Engagement with the Hall

Those newly installed grey baffles in the rear of the auditorium appear to have added resonance to this historic structure. Its magical silences, down to pianissisimos, beloved of orchestras and soloists, have never been more satisfying.

Both Lang and Buchbinder availed themselves fully of the Shed’s magnificent magnification. One often not only could hear a pin drop, but concentrated deeply on the exaltation of glorious sound.

Lang’s choice of the Chopin Nocturne in C Sharp minor was an inspired salute to a majestic pillar of 19th-century romanticism, with satisfying focus and deep appreciation for the composer’s extraordinary melodic gifts.

Perhaps his intended message was that even a renowned mature artist has a right to let his hair down and show his stuff. This he did, to the delight of the audience members, who stood and cheered.

James Sommerville, principal French horn; Thomas Rolfs, principal trumpet; and Mike Roylance, principal tuba gave burnished, perfectly blended and dynamically nuanced leadership to the BSO brass. When performing in section, the group plays as one. This is new to these ears: such inspired old hands bringing into the fold a roster of new talent. One can only wonder: Are they having too much fun?

Andris Nelsons’ and the orchestra’s interpretation of the Shostakovich Symphony No. 5 was out of this world.

Every section of the orchestra excelled in this revelatory performance. Chills ran up spines in the first movement when the flute sounded those penetrating, sorrowful phrases and when the brass answered in kind the martial, staccato, overpowering snare drum.

The succession of discrete, short, brilliant wind crescendos in the last movement evoked a sense of people’s pleas to the gods in those troubled times, while the final parade of F to E flat appoggiaturas suggested that, in the end, their prayers were answered.

Hats off to this wonderful orchestra with its many distinctive voices; to the discerning acousticians whose work graced the magic of this simple, old hall; and to the two virtuoso pianists who heralded Andris Nelsons’ eagerly awaited 2018 Tanglewood residency.