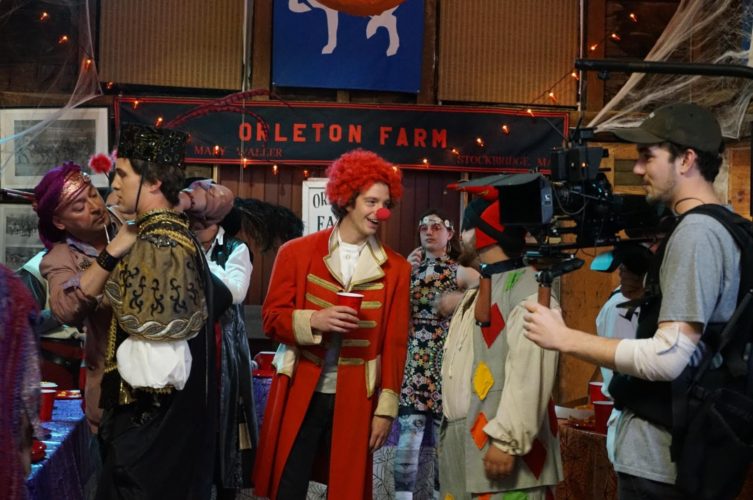 It’s a crystalline October afternoon in Stockbridge. I’m sitting at an outdoor picnic table with the writer/director, the producer/assistant director, and one of the co-producers of a new, full-length feature film, “Stroke of Luck,” being shot entirely in the Berkshires. Writer/Director Christian Frelinghuysen is young, open, and self-assured. He knows the value of his work while embracing the input of his seasoned Producer/Assistant Director Mark Farrell whose appreciation and experience of movies and comedy go back to his grandmother, acclaimed comedienne, Glenda Farrell and his father, Tommy Farrell, who wrote for Jackie Gleason and Red Skelton and “took Judy Garland to the prom.”

“I was a Hollywood kid,” says Farrell. “I grew up reading comedy and cuing my dad.” Making TV and eventually, movies seem to be in his DNA as well as his experience.  Farrell’s many achievements include, but aren’t limited to, working on “Charlie’s Angels,” “Love Boat,” Comedy Central, Showtime, “Curb Your Enthusiasm,” and Ben Stiller’s “All Star Comedy Round Table.”

It’s clear that Frelinghuysen appreciates the many things he’s learning from this more experienced man, but he also follows the call of obsession. He traces his love of film back to being age five. Before beginning “Stroke of Luck,” he studied filmmaking through the graduate level and made a number of short films, including one called “The Ousting” which was shown at 20 film festivals. When he decided to make this, his first full feature, he spent months working on the script before getting permission from his uncle Harvey Waller to shoot it here at Orleton Farm, and from then on, he continued writing it with this bucolic and familiar location in mind for every scene.

Diane Pearlman introduced the two men, and Farrell told me that he was so impressed by Frelinghuysen’s script that when he met him, he was happy to sign on. Frelinghuysen says the script tells an unfolding family story about a young man learning to accept responsibility after he gets in trouble pulling a school prank that leaves him owing money he doesn’t have. When he’s sent to his divorced father’s farm to straighten himself out, he finds himself struggling: he doesn’t like, and in fact, he actually fears horses, and he doesn’t get along with his father. Although Frelinghuysen names Martin Scorsese as his overall professional inspiration, he lists Judd Apatow as one of his chief influencers, especially for comedic pacing. He reminds me that “he believes comedy comes from drama,” and Farrell nods in agreement. He also tells me a romance is an important part of the plot as he thinks romance is “basic to real life.”

Farrell says “Stroke of Luck” employs 10 principal characters, up to 30 extras, including some costumed for a Halloween party scene, and 21 crew members from the Berkshires, Boston, Connecticut, New Hampshire, and Russia — a good mix. There are 17 to 18 days of shooting in 20 days.

One of the co-producers, Elizabeth Aspenlieder, arrives with delicious sliced pizzas for all from Mazcots in Lenox, and assures me that people in Lenox and Great Barrington have been extremely welcoming. “They can see the on-going economic value of making films in the Berkshires,” says Aspenlieder. “There’s so much trained artistic talent here, not to mention the great settings.” Some of the participating local businesses and supporting organizations besides Orleton Farm are Shakespeare & Company, Church on the Hill, First Congregational Church, Betty’s Pizza, Bagel and Brew, Lenox Town Square, Great Barrington Bagel, Limelight Productions, Berkshire School, Plaza Extra, Domaney’s Liquor Store, Mazzeo’s, Nejaime’s Wine and Cheese, and the Lenox and Great Barrington police departments. People on the street noticing the film crew often thanked them and asked them to make more movies in the Berkshires.

Farrell explains that “Stroke of Luck” has taken advantage of the Commonwealth of Massachusetts’ 25 percent film rebate by “doing everything by the book. I’m a by-the-book guy,” he assures me. “There’s a big support group in the community, starting with Mary and Harvey Waller at Orleton Farm.” Some of their team, including horses, even worked as extras. “We’re grateful for all they’ve done for us.” And Christian isn’t the only Frelinghuysen who’s part of this effort. His cousins, Tom and John are both actors in the film. Tom plays the antagonist. Mary Waller has a role. And Christian’s parents, Mary and Fred Frelinghuysen, have opened their home to the group.

I’d been told there is a talking horse in the movie, so I ask about it. Frelinghuysen explains that it’s nothing like “Mr. Ed,” an old TV character he’d never heard of, even at film school, until this July. Only Nathan, the main character, and the audience can hear the horse. “His voice is actually a voice in Nathan’s own mind,” says the writer/director. “He gives Nathan a hard time sometimes, but he helps, like a conscience, or an older brother.”

I’m delighted to learn that there are a number of women working behind the cameras as well as in front of them. Farrell and Frelinghuysen mention a female sound mixer as well as one of the grips.

I’m invited to view the afternoon’s shoot, so I hitch a ride with Michael Burnet, the other co-producer to a beautiful far field where there’s some serious farm equipment; the male and female leads, Kyle Derosier who plays Nathan and Sara Ball who plays Sara, prepare to share the screen with a massive hay baler. I won’t be a spoiler, but I can tell you the scene ends in a funny “disaster” created by an unseen Halloween smoke machine bought at a local store. I watched Director of Photography Drew Percival frame and shoot close up and then wide angle. There are 17 actors and crew and one of the farm’s most enthusiastic dogs going about their business all around me, racing from place to place, waiting quietly, jockeying trucks, cars and golf carts, and doing their parts at the right time with complete professionalism.

At times, it was so quiet, it almost seemed the action was pre-ordained. Burnet explained that there are many skills and talents underpinning the work that’s done on any given film. In another part of the farm, I got to watch a few pumpkins being blown up. Burnet assured me he and several others here are licensed to do this while using extreme precautions. I was kept far back and given ear plugs. The time was regulated so as to disturb the neighbors as little as possible. Through it all, the hills and valleys that form the backdrop remain as serene, as breathtakingly picture perfect as one might imagine.

It’s easy to project that this serious, completely Berkshires-made comedy might be the first of many films to come. Frelinghuysen plans to base himself in Stockbridge for the time being. Farrell has been a full-time resident of Great Barrington for almost three years. Both of them are enthusiastic about the way their presence with the rest of the cast and crew has been received by the locals. Everyone I’ve talked to seems to want to see more movies in the Berkshires’ future. But in the end, “the story is everything,” Mark Farrell tells me, and Christian Frelinghuysen agrees. I think this story is just beginning.