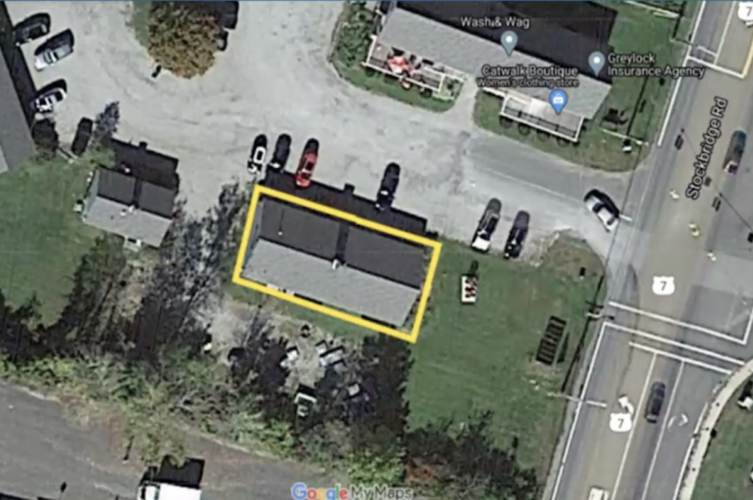 Outlined in yellow is the proposed location for Valkyrie Cannabis on Stockbridge Road in Great Barrington, Mass.

Editor’s note: the location of the proposed cannabis retailer has been revised until more details can be obtained.

As required by state law, representatives from Valkyrie Cannabis Inc. held a community outreach meeting via Zoom on Sunday night. Click here to read the notice. The company wants to locate a marijuana establishment at 325 Stockbridge Road.

The retail area, known as Whitehouse Square, sits directly across the street from Barrington Plaza and the Price Chopper grocery store. The meeting, which was conducted virtually, was originally scheduled for March 20 but was postponed because of the COVID-19 pandemic. Click here to listen to or download an audio recording of the meeting prepared by The Edge.

Robert J. “Robby” Coyle, who describes himself as a “high-profile attorney” from Sag Harbor, New York, is Valkyrie’s president and chief executive. He told the attendees at the informational meeting he and his partner Joseph Burke, also of Sag Harbor, intend to renovate and retrofit the building into a 3,500-square-foot retail store that sells cannabis products.

Great Barrington attorney Kate McCormick represented Valkyrie. She explained that the proposed establishment would be located in an existing structure and would be “hugely accessible.”

“The site allows for substantial parking and will not cause meaningful impact on traffic at the light,” McCormick said.

The project will not require a special permit because the property is in the B-2 zone, which, according to Section 7.18 of the town’s zoning bylaws, allows marijuana retail establishments by-right. As required by town and state regulations, the store will not be located near a school or any other place frequented by children.

Valkyrie will have to go through the site-plan review process with the town planning board and negotiate a host community agreement with the selectboard. Of course, the company must adhere to all state laws as set forth by the Cannabis Control Commission.

In response to questions, Coyle said the store would have state-of-the-art security systems that include 24-hour video camera surveillance, “robust alarm systems,” age verification at sales counters and methods for preventing diversion of the product to minors. Coyle also said the company would make a “significant investment in ultraviolet technology for sanitizing and has a model for social distancing and for offering curbside pickup of its preordered products.

“We have to think of things in a totally different way,” Coyle said.

Coyle emphasized that he wanted Valkyrie to have a positive impact in the community. Coyle added that, in keeping with the social impact program of the CCC, he plans to hire employees who have been historically disadvantaged by past drug policies.

His cannabis store will do this in order “to promote equity for those previously affected by its prohibition.” The CCC also has a social equity program designed to lower the barrier to entry to the cannabis business by providing startup capital and other assistance to “people from communities that have previously been disproportionately harmed by marijuana prohibition and enforcement.” Coyle did not say whether Valkyrie planned to join the program as a funder.

Theory Wellness, which opened as Berkshire County’s first recreational marijuana store in January 2019, last year stepped forward to fund and operate a social equity program designed to support “economic empowerment” entrepreneurs in opening cannabis dispensaries. Valkyrie will be located only a few hundred feet away from Theory, which is just across the street.

“We have chosen a site we believe is noncontroversial, for lack of a better word, with the by-right zoning,” Burke said. “We’re in a location where the town wants the proposed establishments to be.”

McCormick said the host community agreement will be negotiated with the selectboard “at a later date.” Typically, cannabis retailers pay 3% of gross sales to the town and make a $10,000 annual contribution to an approved nonprofit. There is no indication on the CCC website that Valkyrie’s license has been approved.

While proposed pot shops have been proliferating in Great Barrington, Theory is the only one that has actually opened. Another on South Main Street near the Great Barrington Bagel Company recently received its provisional license for a shop that is still under construction. It will be known as Rebelle, is a project of Community Growth Partners and plans to open this summer, according to its website.

A third, Calyx Berkshire Dispensary, also recently received its provisional license and will be located in the former Joe Dagget storefront on Main Street next to Tom’s Toys in the heart of downtown. Finally, Highminded plans to open a shop in the former Dempsey physical therapy building on Main Street.