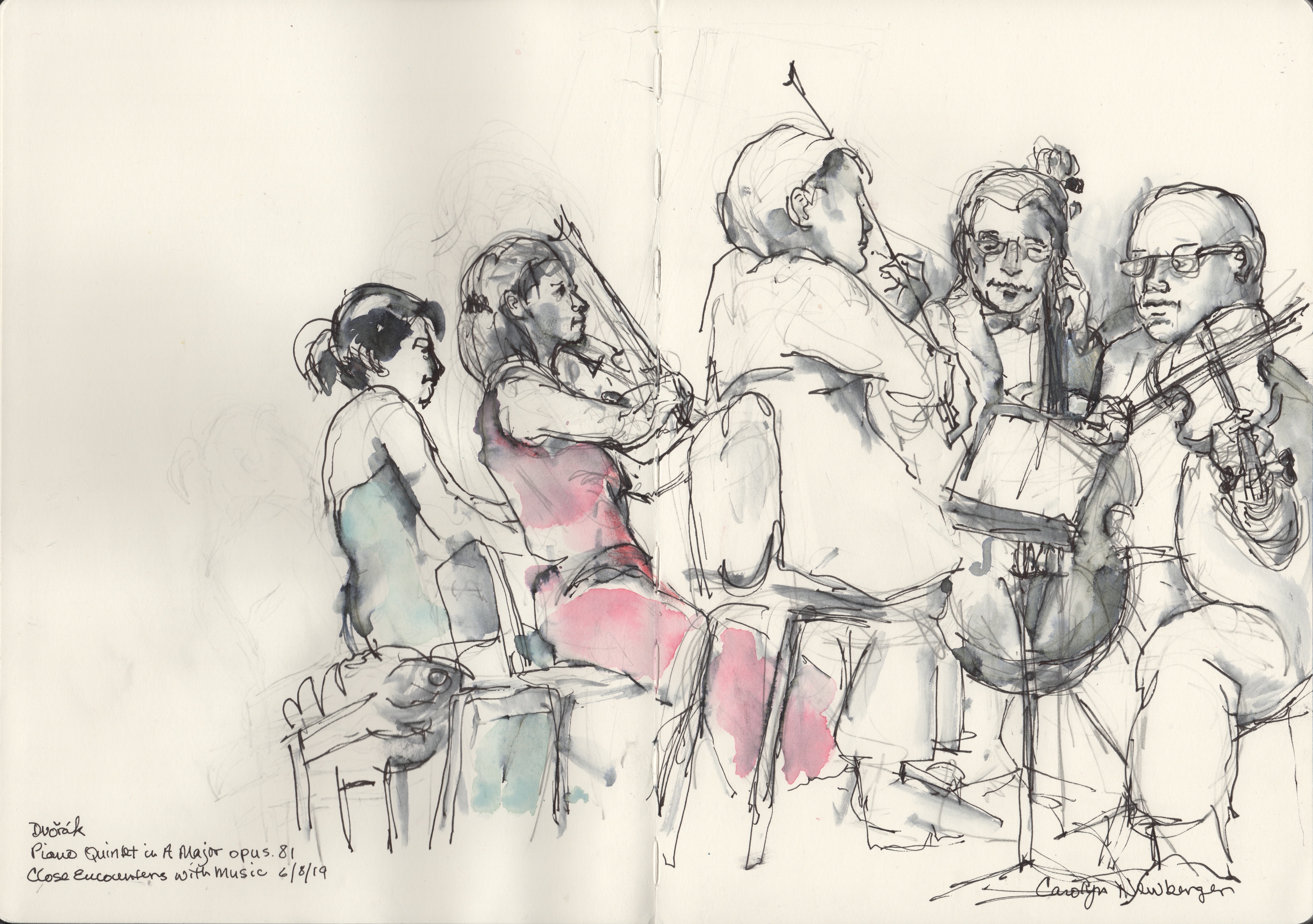 Dvorak Piano Quintet in A Major. Illustration by Carolyn Newberger

Great Barrington — On June 8 at the Mahaiwe Performing Arts Center, in his charming introduction focusing on the evening’s theme of “Like Father-in-Law, Like Son-in-Law,” Close Encounters With Music artistic director Yehuda Hanani commented on how Antonin Dvorak, whose greatest influence was Johannes Brahms, “made Brahms’ density and weightiness more light and accessible.” As well, Brahms himself spoke enviably of Dvorak’s compositions, “I should be glad if something comes to me as a great idea which occurs to him by the way.”

But Dvorak seized on Czech folk music themes in the spirit of 18th– and 19th-century nationalism as a “symbolic weapon” that would undermine the hegemony of the Hapsburg Court and the “German Cultural Monopoly.”

Joseph Suk, his student and future son-in-law who, unlike Dvorak made no special use of folk themes, Hanani said, transported Dvorak’s romanticism and melodic accessibility into the 20th century as if he were “in search of atonal expression.”

This was an enormously satisfying evening, even if the familial simile in the concert theme seemed a bit too facile. Where, for example, both Dvorak and Suk employ nonharmonic tonalities to push romantic emotion, their styles diverge dramatically in the use of one important device. In resolving a nonharmonic melodic note downward, Dvorak shows how he adores the appoggiatura, in which the note, prominent in the melody but out of the chord, returns gently to the prevailing tonality.

Suk, however, boldly reversed this thrust in the pieces in this program, hitting the nonharmonic note hard as if his intention was to startle the listener with the dissonance and resolving it upward. Listen to this “leading tone” in the melody that opens the recorded example below. It’s a love song, for sure, but this, as well as Suk’s processions of loosely related block chords, arguably constitutes as well a declaration of independence from his father-in-law.

Peter Zazofsky, the renowned violinist and professor at both the Boston University Conservatory and Boston University Tanglewood Institute (he’ll be leading a quartet workshop recital and talkback during the opening weekend June 28 of Tanglewood’s Linde Center for Music and Learning) brought every ounce of his hot sprit and virtuoso technique to Suk’s Pisen Lasky, Love Song Op. 7, No.1. In so doing, he modeled the succession of committed performances that followed. This was expressive playing of a high order, adorning the Brahmsian melodic themes with silken timbres and thoughtful dynamics as well as emotional power where it was called for.

Pianist Soyeon Kate Lee, addressed the keyboard with flowing gestures, pulling from Terry Flynn’s superbly voiced Steinway B piano, specially tweaked for this performance, a stunning pallet of nuanced phrases, crescendos and diminuendos, perfectly apposite to Suk’s sensory excursions in the violin. One was left with the impression that they had prepared for weeks. There was no doubt of their total engagement with this music.

And talk about engagement! Yehuda Hanani’s performances envelop him completely in music, frequently to the point of rhapsodic facial expressions, over-the-top bowing (here, bouncing spiccato double-stops like drumsticks), and by tapping his right foot against the wooden flooring, adding further unexpected percussion.

Yet Hanani’s surpassing musicality forgave these excesses to the extent that, in the course of this splendid evening, they were not excesses at all.

In Suk’s Ballade in D Minor No. 3 for Cello and Piano, he portrayed the composer’s pathbreaking and courageous repudiation of Bachian classicism by giving delighted emphasis to the hitherto forbidden, here repeated augmented fourths (or tritones, E to B flat if you’d like to spell it out) that preceded an astounding parade of chords, linked to one another by fragile single note transits. Soyeon Kate Lee gamely kept up with the Hanani whirlwind, ever delicately tracing contrapuntal breezes up and down her instrument, and pouring emotion and consistency over the exertions.

The 2/4 splashes of Dvorak’s Rondo in G Minor soared through the ether, making these listeners’ toes tap, and his eloquent transits from D minor to D major brought the sun out in our spirits.

At this point in the concert, it became evident that the performers were inhibited by the problematic acoustic of the Mahaiwe stage. Note, please, how, in the two videos that we have embedded in this review, baffles are positioned behind the instrumentalists. These serve both to focus the instrumental voices within the ensemble, the better that the musicians can listen to one another, and to project the music forward. After all, Close Encounters With Music offers as substantial a chamber music series as South Mountain’s, where the performances go forth at the Berkshire landmark established by Elizabeth Sprague Coolidge, the so-called “godmother of chamber music.” This vision and inspired staging ought well to be applied here, because Yehuda Hanani and his institution are offering a counterpart musical legacy that, unlike the unheated South Mountain hall, offers programs in every season.

After the intermission, Dvorak’s second piano quintet displayed the full range of this ensemble’s passion and virtuosity.

After the excited, powerful statement of its second theme, the movement took flight as a plane from the runway, and the two violins were as wings lifting the ensemble up and up. High emotions and stirring counterpoints got the better of the acoustical challenge and its disturbance of intonation, and a cloud of optimism descended from the heavens, suffusing the audience with delight and optimism.

This otherwise sophisticated audience burst into applause at the end of the movement. With respect, your reviewers joined in this memorable gathering of admiration of gorgeous music-making.

Here is a comparably beautiful performance by the legendary pianist Sviataslov Richter and the Borodin Quartet:

In the second movement, a sublime conversational exchange between the piano and the string quartet led to a breathtaking trio of piano, viola and cello. Violist Michael Strauss is a master of his instrument, renowned for his vision, expressivity and, like Zazofsky, his teaching. Here, his balanced contributions were especially vivid in the elegant, seamless matchup of a long legato that stretched across the low register of the viola and the high midrange of the cello. It was if they were singing as one, and one had to watch to believe it.

Irina Muresano, as well a famous soloist, brought to her supportive role an astounding technical feat in the second movement. In Dvorak’s evocation of a guitar, she was given a set of triple-stop chords to strum. But these pizzicatos were unlike any others. Each resonated with perfect vibrato, which is to say vibrato controlled by three fingers—spellbinding, beautiful to witness, glorious to hear.

Soyeon Kate Lee, in all her expressive glory, brought the movement to its gentle close with her extended, waltz-time piano solo, backed by second and third beats in the quartet. Then, with her trilling, twinkling high-register ornaments hanging like stars over the ensemble, she pressed the movement to a close with what the New York Times called “a huge, richly varied sound, a lively imagination and firm sense of style.”

The Finale movement opens with a joyful Slavic Dance, with accents on two and stunning syncopations. Now, everyone was having fun, and the struggles with the stage were long forgotten. One witnessed delighted smiles between Muresano and Zazofsky as they set forth on a sunny sequence of dramatic double stops and the fugal development of a theme stated eloquently by Muresano. A final accelerando brought the evening to close with a brilliant cadence that seemed to say, “Triumph over adversity, all’s well with the world, and fathers and sons-in-law can abide peaceably with both their shared legacy and their differences.”

Sviataslov Richter and the Borodin Quartet play Dvorak Piano Quintet No. 2 in A major: