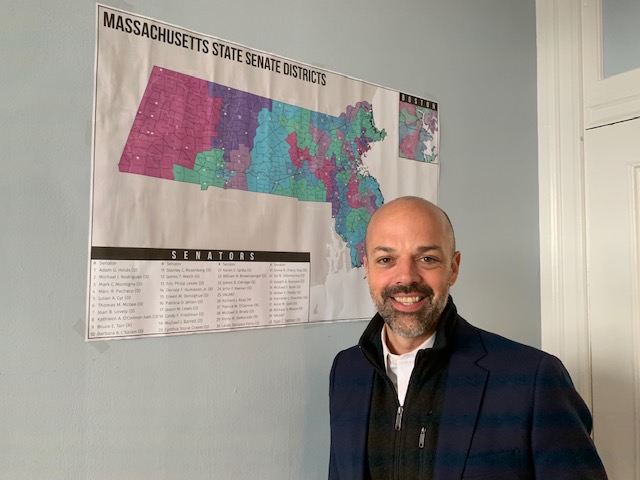 In May of last year, the Boston Globe published an opinion piece by the Massachusetts District 1 state Sen. Adam Hinds, D-Pittsfield, titled “The Income Inequality Problem Massachusetts Ignores.” He aimed to raise awareness of the unique issues facing citizens in the small towns of his sprawling districts. These include limited access to high-speed internet for working remotely, shuttered small schools, and the nearest hospital a 30-minute drive away. He advocated for more investment in these communities. As part of that investment, he and his colleagues recently pushed through a $1 million supplement to a $1.5 billion school aid package. “Rural” is a category that’s slowly being replaced by the more inclusive “Low and Declining Enrollment.”

Hinds represents 52 towns and villages in District 1, the most geographically far-flung in the state. He is the chair of the revenue committee, vice chair of redistricting, and a member of five others. He typically spends Wednesday, Thursday and sometimes Tuesday in session in Boston, with the rest of his time in district, working out of his North Street, Pittsfield, office.

Massachusetts had a $1 billion budgetary surplus this year.

Sheela Clary: Where did the surplus come from?
Adam Hinds: We had $500,000 million in new revenue, from casinos, marijuana, Air Bnb. Some people are saying that it’s also due to when people were filing due to the Trump tax cuts. Finally, people are doing well. We are a high-income state. [This year] we’re expecting an increase, but nobody’s suggesting that much. I think we anticipated a 3.7 percent increase, but no one wants to believe that we will have $1 billion every year to spend. There’s a reality about when the recession will hit, when the air comes out of the economy a bit.

We have this Student Opportunity Act, $1.5 billion [to be spent over seven years] that was signed off on two months by the House, Senate and governor. The framework for that conversation was the foundation budget review commission, a high-level blue-ribbon panel, people who really knew the issue. They accurately determined that the state is funding 58% less than what schools actually spend on low-income students, special education, English language learners, and health care for current employees and retirees.

It’s great news for Pittsfield, with $22 million by year seven in new money, and that’s because of the emphasis on low-income and ELL students. North Adams will do OK. From a social justice perspective it’s great. [There are 12 low-income tiers of student populations, the highest being 60 percent and above. Last year, Pittsfield was 51 percent, Berkshire Hills was 29 percent and Southern Berkshire was 35 percent.]

But I told the Education chairs [Jason Lewis in the Senate and Alice Peisch in the House] that I’m willing to bet we’re basically looking at the status quo for most of my schools. They said, “No, no, no, you’ll see.” Sure enough, we sat down with the charts and finally they said, “Yes, you’re right.” We see increases on average to about $300,000 on year seven, so basically the status quo. Even with all this extra funding, my schools are not getting an increase. It’s significant, it’s something like $7,000 extra per student when you get to the highest threshold.

[The rural school aid’s advocates are] an ad hoc coalition of people with similar schools, like Sen. Julian Cyr on the Cape, because they have very similar dynamics to the Berkshires in terms of population decline and seasonal economies; Jo Comerford in the [Pioneer] Valley; and Anne Gobi in central Massachusetts.

We made the argument that rural school aid should be a part of the formula. So the chair of Ways and Means agreed to increase rural school aid by another $1 million. We’re increasing calling it Low and Declining Enrollment because there are schools like Adams-Cheshire that don’t quite hit the threshold for rural or low-income, but they do have low and declining enrollment. [The definition of “rural” for the purposes of school funding are Priority 1, fewer than 11 students per square mile, and Priority 2, more than 11 but fewer than 21 students per square mile.]

Declining enrollment is something that many more schools can identify with.

There is a commission as part of the SOA — I don’t always like commissions, but they can produce meaningful work — given a year to come up with the final word on how to address the rural dynamic in public education. We also included $10 million for exploring efficiencies in a rural context.

Another thing I’ve been focused on is I am the co-chair of the School Transportation Commission. [Schools districts are not fully reimbursed for their transportation costs. Berkshire County consists of 927 square miles.] We are now at 82% reimbursement. There’s an increasing recognition that not all regional schools are created alike.

Moreover, what’s now on the table is, “Can we have municipal schools in that equation?” You hear from Lee and Pittsfield, who say, “That’s great, you all are fighting for your 100 percent. We don’t any reimbursement, so help us out.” If there are schools that go up to 100 percent from 82 percent, that’s $200,000-$300,000 more to their bottom line. We are working on a set of recommendations, which should be out in the next month to six weeks.

Special education transportation is now included in the “circuit breaker” funding. If you have a student who costs $100,000 [to transport to a specialized school out of district], you will have to pay that the first year, but you’re reimbursed for anything above $25,000 for your previous year expenses. A lot of people are pretty darn excited about that. The costs can pile up pretty quickly with only a handful of students.

The other thing that’s getting a lot of attention is studying Proposition 2 ½. [The statute that went into effect in 1982 setting a ceiling on property and automobile excise taxes.] There are a lot of towns saying, “Even if we want to spend more on education, and other critical things, we can’t, we’re hitting our levy ceiling.” It comes up a lot with selectboards. But at the wider level of residents, their reaction might be, “It’s MORE taxes?” I’m not sure what kind of traction it will get. But there was pretty strong support for it in the Legislature when it came up as an amendment to the SOA. It would have to go on a statewide ballot.

SC: And this is separate from the “millionaires’ tax”? [Called the Fair Share Amendment.] I know that was killed.
AH: Yes, you’re right. The Supreme Judicial Court ruled that it was unconstitutional the way it was written. It was a technicality. And Fair Share is back on the table. It was filed as a bill to amend the constitution. We had a first vote on it this past year. We need two successive votes on it, so we’ll vote on it again. The percent in favor was in the 70s. [In June, 2019, the vote in the Massachusetts Legislature for the Fair Share Amendment was 147 in favor and 48 opposed.]

This means that those with incomes over $1 million per year will be taxed an additional 4 percent for everything above and beyond the $1 million, for a total of 9 percent. The first million is taxed at 5%. [Someone with an annual income of $2 million dollars would pay a state income tax of $140,000: $50,000 on the first million, and $90,000 on the second million.] It would be an additional $2 billion dollars a year if the tax goes through.

The last time I checked, a few years ago, there were 14 millionaires [those with annual incomes over $1 million dollars] in Pittsfield alone. Alford has a concentration, Williamstown has a concentration. It’s in the single digits elsewhere.

People get it. At $1 million dollars a year, you can afford to pay a little more. There have been five efforts to create a progressive tax structure in Massachusetts, and they’ve all failed. Even though we have it at the federal level, even though there’s something like 22 other states that do it, in Massachusetts, it’s failed every time, except for when you say, “What about the super-rich?”

The other thing I’m chairing is a revenue working group that is going to come up with its recommendations this year. We talk about how to make our revenue more fair — maybe a corporate minimum, adjustments for the earned income tax credit.

Some people talk about it in terms of, well, in 2000, we were bringing in $2,000-$3,000 more [per citizen] every year. Then through a range of adjustments, including capital gains and the income tax going from 5.9 to 5 percent, we’ve lost all that money. Some people say combined with the Fair Share Amendment and new revenue, we feel that we can get back there, which is significant when you’re talking about big-ticket items like $1.5 billion dollars for education.

Everyone expects $5 million-$7 million dollars to be spent against it by the High Tech Council and other groups.

To some degree, it feels like what we just did is level-setting. We have a problem where we’re shortfalling even what we intended to do ourselves.

The conversation is focusing a lot of Pre-K and higher education next. There is a big question around early education, and the fact that we spend 10 percent less as a state on higher ed than we did just 10 years ago before the recession. We have to take a swipe at that.

SC: Is there much talk among your colleagues about a more open idea of what “college and career readiness” looks like, and acknowledging that not all students are going to college?
AH: Honestly, I hear that more locally than I do at the state level. There has been a bit of a push on voc [vocational education]. There’s a waiting list now at some voc schools. [Such as Tri-County Vocational High School in Franklin.]

McCann is one of the few schools in Berkshire County with an increasing enrollment. Lenox, last I looked, was another outlier, because they were only down like 4 percent.

SC: What were the discussions among your colleagues regarding cannabis tax revenue? [A 17 percent state tax is collected at recreational marijuana stores.]
AH: One thing we did was say the revenue has to go to seven items, such as investing in communities disproportionately impacted by the war on drugs. Another was mental health and substance abuse. The rest of it goes to the general fund. So we’ll be using it for sure for this $1.5 billion, but we’re getting revenue from everywhere we can.

Legalization has rolled out slower than anyone thought it would. There’s a lot of storefronts that aren’t open and aren’t collecting tax money. It’s revealing a lot of inconsistencies, when you switch from an illegal substance to legal.